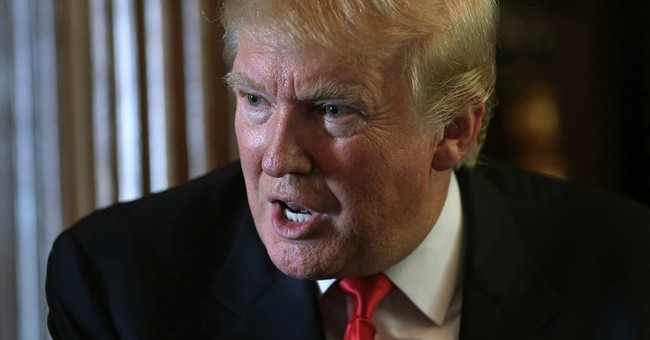 Donald Trump has jumped to the top of the national polls for the Republican Party's presidential nomination.

It's an embarrassing moment for the GOP, the country and the planet.

But everyone knows America's richest celebrity businessman will never become the Republican candidate, much less president of the U.S.

Unfortunately for the GOP's future, however, the billionaire blowhard is not going to fade away in a week or two like Herman Cain or Michele Bachmann did in 2012.

Whether he's really worth $10 billion, as Trump claims, or just a few billion, he has more than enough money, ego and media pull to keep him in the race all the way until Election Day.

With an ego bigger than America, Trump could pull another Ross Perot and put another Clinton in the White House.

Meantime, Candidate Trump has been a running political joke for weeks.

Underneath his criticism of America's weak and stupid leaders and his boasting about his being able to make better trade deals with foreign countries than anyone else, he really has just one issue - immigration.

An issue which he blew badly.

In trying to explain his crude position on that politically complex subject, he managed to offend every Latino in the hemisphere by implying that illegal immigrants from Mexico are mostly murderers and rapists.

As for Trump's positions on other issues important to conservatives and the future of America, they remain a total mystery.

The media won't ask, and he won't tell.

Is he pro life or pro choice?

Is he for national health care or against it?

How exactly does he plan to create all those new good jobs for Americans?

Is he going to raise taxes on the rich? Flatter taxes or fairer taxes?

What would he do to fix the education problem?

If indeed immigration is his signature issue, how is he going to stop or control it? And what's he going to do about the 12 million illegals already here?

Maybe Candidate Trump filled in Ted Cruz on where he stood on these issues the other day when Cruz made a friendly visit to Trump in his Tower.

But other conservatives need to find out if Trump is really a Republican.

He sure doesn't act like one. He's already broken Ronald Reagan's 11th Commandment - never speak ill of another Republican - dozens of times. (Trump's 12th Commandment is "Speak ill of everybody.")

So before any more conservatives jump on the Trump bandwagon, wouldn't it be better to find out where he stands?

We only get sound bites from Trump's events. But no one in the liberal media is in a big hurry to go deeper on him and his views.

They aren't going to dig deep into his "colorful" personal or business history in an attempt to discredit him or prove, as some people say, that he's not even as conservative as Bill Clinton.

If the media did some excavating, they might be surprised by Trump's answers.

They might find that he doesn't say the same thing to conservatives in private as he when he bloviates in front of crowds and cameras.

What, for instance, did Candidate Trump say in private when he talked to the Friends of Abe, the support and networking group actor Gary Sinise started for about 2,000 political conservatives working in Hollywood?

Were the FOA's elite members put off by him? Did they embrace him? Who knows?

No one in the mainstream news media seems too eager to expose Trump for the conservative fake he really is.

They treasure him for his celebrity and his entertainment value and don't want to spoil the show.

But the liberal media treasure Trump even more because he spends so much time helping them discredit the Republican Party and conservatism.