Hillary for America? Why? 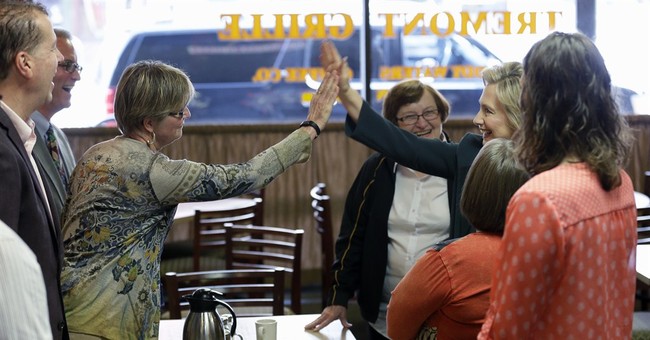 She officially arrived Sunday - but not in the flesh.

She announced her decision with a low-key tweet and a two-minute video featuring a diverse lineup of adorable Democrat voters, a sappy message about being "a champion of everyday Americans" and very little face-time for herself.

Then, to prove she's still a grassroots Chicago girl at heart, the multimillionaire from Chappaqua sneaked out of New York at 70 mph on one of the phoniest "road trips" of all time.

Chauffeured by Secret Service men in a three-van convoy bound for Iowa, she actually met a few regular "flyover people" at a gas station in Altoona and she made a sneaky pit stop in Ohio at a Chipotle.

With her oversized shades and trusty aide Huma Abedin paying the bill, however, Hillary was spotted standing in line at the popular Mexican chain restaurant.

When the media swooped into the Chipotle a day later, they learned that Hillary and Huma had stiffed the kids behind the counter.

Caught not leaving a tip for the working class is not a good PR move for a wealthy everywoman who says she'll fight for the struggling everyman.

As Rush Limbaugh pointed out, that little socioeconomic gaffe revealed how badly out of touch Hillary is with the people she's counting on to vote her and Bill back into power.

Which raises the big question: "Why 'Hillary for President'"?

She's the Democrats' default presidential nominee, the Entitled One, but she's a lightweight on every scale.

Quick. What does Hillary stand for?

Has she ever had a deep thought or a good idea about policy - foreign or domestic?

What has she done in her public life so far to make this country a better place? What is her great vision for America?

And what are her great career accomplishments? Not many.

She was basically handed a U.S. Senate seat.

Big deal - a liberal Democrat carpetbagger wins in liberal New York. And then makes herself invisible for six years in the Senate.

As secretary of state, her highlight reel includes Benghazi and a string of failures in Iraq, Afghanistan, Russia and China.

Her biggest achievement as secretary of state was racking up a record number of frequent flyer miles.

For her debut in Iowa this week Hillary was dodging tough questions from reporters and carefully speaking in political generalities, platitudes and soundbites.

She was trying so hard to put some daylight between herself and President Obama that she almost sounded like my dad.

She was promising to make the economy grow by cutting bad regulations and she mentioned adding market-based reforms to what's she thinks are the good parts of Obamacare.

Unfortunately for the country, Hillary can't escape being Hillary. And if she's saying anything about the economy that makes sense, it's pure accident.

Hillary can't compare to Marco Rubio and Rand Paul, the first of a gang of young, smart, accomplished conservative Republican presidential candidates who are not stuck in the 1990s.

The announcement speeches by Rubio and Paul were great - full of vision and ideas about reform in Washington and calls for reasserting America's prosperity at home and leadership abroad.

Meanwhile, Hillary's really just running on a single issue - that she's a woman and it's time for America to have its first woman president.

Over the next 19 months I think millions of everyday voters are going to figure that out. Maybe the liberal media might too.