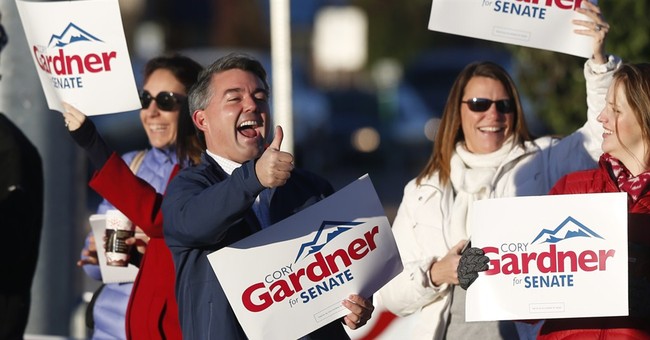 Liberal pollsters and liberal pundits on TV refused to see the Republican wave coming and still can't believe it came.

But the S.S. Obama and its cargo of bad ideas sank like a rock, dragging Captain Harry Reid and a motley crew of hopeful Democrat office seekers with it to the bottom.

Republican candidates won from sea to shining sea. By January, the GOP could hold a 54-seat majority in the Senate.

The GOP also grew its majority in the House by at least 12 seats and kicked butt in most of the 36 governors' races, pulling upsets in blue liberal places like Massachusetts, Maryland and Illinois.

But I have some advice for the GOP as it makes plans to take control of Congress in 2015 and looks toward winning the presidential election of 2016 - when an anti-Obama strategy won't work.

The first thing the party has to do is remember what happened the last time it was in control of Congress, during the G.W. Bush years.

Republicans blew it. And many of them were quickly booted out of office by voters, mainly for betraying their conservative faith and impersonating a bunch of Big Government Democrats.

Republicans in Congress during the 2000s earned the nickname "Democrat Lite" for good reason. It was accurate.

Starting in January, and continuing for the next two years, the GOP must now provide real leadership, stick to conservative principles and show some guts.

Republicans in Congress have got to seriously start working on passing tax reform, healthcare reform and immigration reform. They've also got to start reversing the growth of the federal government, not just slowing its growth.

And if Republicans are going to start throwing around my father's name, they need to understand what Ronald Reagan understood about playing and winning the game of politics in Washington.

He looked at politics in DC like a football game. He understood you can't always throw Hail Mary passes and have them caught in the end zone for a touchdown.

You usually have to move the ball 10 yards at a time. It may take longer than some people want, but the ultimate goal is the same -- scoring that winning TD.

Now that they'll be in charge of Congress, Republicans have the ability to get things done. They can force the whole Congress to vote on the hundreds of spending and jobs bills that are stuck under Harry Reid's desk.

The Republican Party has another chance to show it can govern - maybe its last.

This time its members can't get caught in the legislative weeds or forget the reasons voters sent them to DC.

They have to move forward aggressively with sensible conservative, small-government policies. They have to fix the messes Obama, Reid & Co. have left us with.

And Republicans also have to make us feel proud again to be Americans.

In a real sense the GOP has to become a cheerleader for America. Americans are looking for a cheerleader. They want to feel good again about themselves and their country.

On Tuesday voters gave Republicans a second chance to cheerlead and lead.

They can't blow it again. The country - and the world - can't afford it.