Travels with POTUS, FLOTUS and the ‘Riddler’ 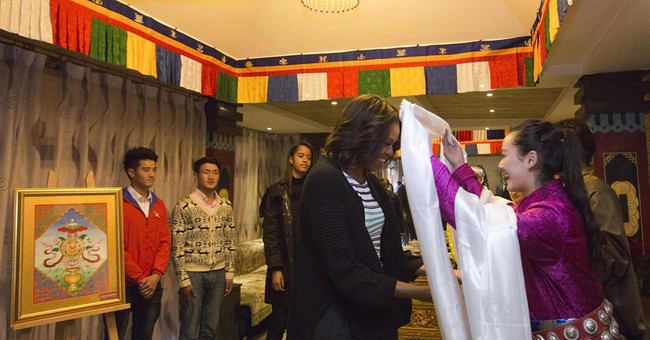 Come on guys, let’s start focusing on the important stuff like ObamaCare, Ukraine and winning the Senate.

All this outrage in the conservative media about how much money it’s costing for Barack Obama’s trip to Belgium and for Michelle Obama’s travels to China is just a waste of time.

Yes, the cost of their trips, whether they’re measured in millions of dollars or thousands of hotel-room nights, is outrageous.

Obama’s official overseas trips and family vacations seem extravagant and more expensive than they should be, but they’re not significantly higher in number than George W. Bush’s were.

According to a National Taxpayer Foundation study reported by Breitbart.com, so far Obama has taken 31 trips and spent 119 days abroad. That compares to George W. Bush’s 28 trips and 116 days overseas in his first five years and Bill Clinton’s 27 trips and 113 days.

Let’s get real. Presidents and “protectees” like the first lady and the Obama kids travel differently than any other persons in the human race, except maybe Donald Trump.

I know because for the eight years my father was president I was a protectee – and so were each of my two kids.

Whether I was alone, with my family or with my father, I had a three-person Secret Service protection detail -- 24/7. So did each of my kids, Cameron and Ashley.

In the 1980s the media made a fuss about how much money was being spent on me when I traveled to Europe with my wife and kids.

I admit it was embarrassing. But I had no choice when it came to security. I was on the president’s protected list and the president gets to decide who’s on it.

Traveling with all that security was crazy, complicated and costly to taxpayers. Advance teams went ahead of us to Europe to contact local police.

We were a 12-car motorcade wherever we went. Along with our traveling Secret Service detail, when we were in Europe we were protected by national and local police forces. In London, Scotland Yard joined our parade.

Once when I flew into Genoa, Italy, I noticed the airport was surrounded by soldiers armed with Uzis.

All that protection made sense then and still does: No foreign country wants to risk having a member of the family of the American president – or any visiting G-7 official -- kidnapped or killed.

At home in Los Angeles, it was the same deal. There were three agents per shift with me, three with Cameron and three with Ashley – again, 24/7.

The Secret Service drove my kids to school every day. You had a car and a driver, plus you had an agent in the right front seat and a backup car with one or two men.

We all had codenames. Mine was “Riddler.” The kids had codenames. Ashley already had her codename – “Raindrop” – before we knew whether she was a boy or a girl.

Since the Secret Service only protects blood relatives, my wife could go off by herself. It didn't make her feel so good, but as long as she had one of the kids in her arms she was protected. (By the way, if your marriage can survive eight years of constant Secret Service protection, it can survive anything.)

Yes, the cost of the Obamas’ travels is off the charts. Yes, it seems like they are traveling while Washington burns.

But should Michelle Obama not be allowed to take her kids and mom to China? Should I have not been allowed to travel because my father was president?

So let’s get over it.

Protecting the president and his family is more expensive than ever, but it’s something we have to do. Conservatives need to get out of the weeds, focus on what’s important and stop complaining about things they don’t know anything about.