Uncle Sam: Hands off the Internet! 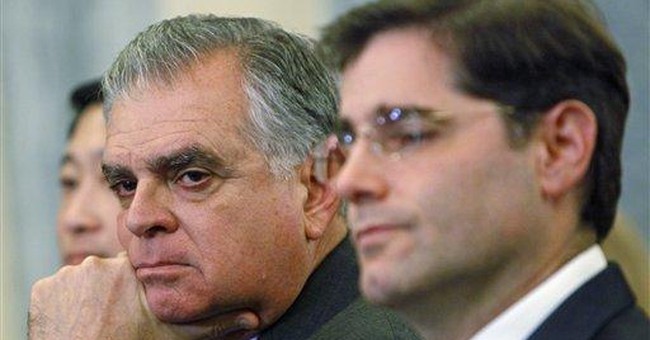 The Federal Communications Commission (FCC) wants to get its grasping hands around the throat of the Internet, the international town hall where Americans have been free to express their opinions without Big Brother's permission or interference.

That makes the FCC unhappy. It seems that this taxpayer-supported, intrusive federal agency simply can't bring itself to allow anything having to do with Americans communicating with each other in public without their lordly oversight or permission.

The Internet -- despite Al Gore's absurd claim the he used his political powers to invent it -- is largely free of U.S. or foreign government regulation or interference. In its present form, free from any government's rules or regulations, it's the finest example of what freedom of speech is all about, on a worldwide scale.

That seems to irk the compulsive regulators at the FCC, hence their determination to drag the Internet into their regulatory lair.

A national telephone survey conducted by Rasmussen revealed that only a scant 21 percent of likely U.S. voters want the FCC to regulate the Internet as it already does radio and television. Fifty-four percent are opposed to such regulation, while only 25 percent are not sure. That's a pretty healthy percentage that thinks the government should keep its sticky hands off the World Wide Web -- a percentage that the FCC will ignore at its own risk.

The compulsive regulators at the agency need to keep in mind that within a few days the U.S. House of Representatives will be under the control of Republicans, and that the House controls the nation's purse strings.

It would be very unwise for the FCC regulators to fail to recognize that at the moment Congress reconvenes in early January their financial future will be in the hands of a party largely composed of glorious skinflints, most of whom view any government regulatory power as inherently dangerous and in need of the most careful oversight.

And that's what they are going to get.

Much of that oversight will focus on the fact that the FCC decision, based on a party-line vote, decided to impose what they termed "net neutrality" regulations on the World Wide Web. This despite the fact that by a whopping 52 percent to 27 percent margin, Americans are convinced that more free-market competition is far better than having more regulations that allegedly protect users of the Internet.

As shown by Rasmussen, Republicans and unaffiliated voters overwhelmingly share this view, yet a plurality of the Democrats among them -- some 46% percent -- think that more regulation is better.

As a veteran radio broadcaster, I relish the freedom to express my opinions without some would-be, present-day version of Nazi propaganda minister Joseph Goebbels looking over my shoulder and telling me what I can say and what I can't say. That's not what America is all about.

Americans need to keep in mind the fact that government regulators use the time-honored tactic of tightening their grip on the citizenry one small step at a time. It appears that in the case of the FCC's power grab, they would like Americans to believe that they are only seeking to protect us from some unnamed abuse of the freedom of speech and not in imposing government censorship on the Internet.

They should recognize that we are not that stupid, something the new GOP-controlled House hopefully will teach them starting next month.