Getting it Right? A Half-Hearted Afghanistan Strategy Revisited 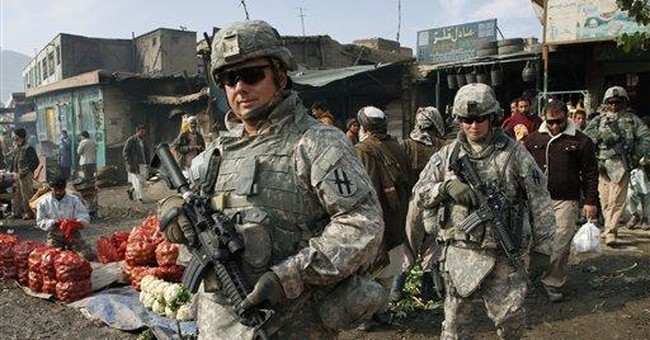 As many of you will recall, in previous writings I urged President Obama to do the right thing when it came to providing Gen. McChrystal with his requested troop increases in support of the war effort in Afghanistan. And during the early debate over troop levels, I even accepted the president's request for reasonable time to meet with his advisers to discuss all options available to obtaining military victory in Afghanistan.

Last night, I was pleased and encouraged to see that President Obama heeded the counsel of his generals on the matter of increased troop levels that are so critical to our continuing battle against terrorists and those who house and support them. He has called on us for unity and support, and that is how we should respond.

Sadly, we are already seeing many members of the president's own political party take exception to an increase in troop levels -- many pushing for a retreat from the fight against those who took the lives of so many innocent victims on September 11, 2001 and who are continually plotting for the next great attack against Americans on our home soil and/or abroad. How did so many Democrats forget that fateful day -- a mere eight years ago?

This morning, the Taliban and Al Qaeda are on notice that 30,000 more of America's best and brightest military personnel are gearing up to take the fight against terror to the nearest town, village and even cave to track down and eradicate those who have done or desire to harm America and her interests.

But I do take exception to the fact that the Taliban and Al Qaeda have also woken up to news that this massive American military surge, one that will increase our troop levels to close to 100,000, already has a publicized end date.

Yes, that is correct. Our enemy has been put on notice by the president himself that by July 2011, we will begin pulling back our troop commitments in Afghanistan. What makes this date even more disconcerting is the fact that it will take us several months to implement the 30,000-troop influx that is so central to this new security offensive -- hopefully in time for the often-called "Spring fighting season" there.

This means we will begin leaving just a year after all the troops arrive -- but conveniently in advance of the beginning of the 2012 election season.

Now I am not a general or even a military historian, but it doesn't seem to me that it makes any sense to let your enemy know when you are coming and when you plan to leave. All they should need to know is what you plan to do: win. And our troops on the ground need to have the confidence that these decisions and timelines are based on sound military principles rather than political calculation.

Last night, President Obama had a golden opportunity to borrow a line from my father -- one that would have brought the house down and instilled more confidence in the plan he appeared half-heartedly to support. All he had to do was announce: "We win -- they lose." But rather, the president's message and demeanor presented more of a détente approach to American foreign policy, in a speech where he never once made victory our goal.

Gen. David Petraeus, leader of the Iraq surge and now head of U.S. Central Command, acknowledged after President Obama's speech that there was "tension" between the desire to win the conflict and the desire to pull out quickly. Those desires are both real and understandable, but no one knows better than Gen. Petraeus how much meeting both can sometimes prove impossible.

Moving forward, the American people, Afghan President Karzai, and our NATO allies must now rise to the task before us. But even as I move to follow my president, I can only hope that it is this pattern, rather than political timelines, which he follows in the next two years.

To the men and women who now bravely go to serve, you have my deepest thanks, hopes, and prayers. You are the soul of this country, and your service will not go unmarked.