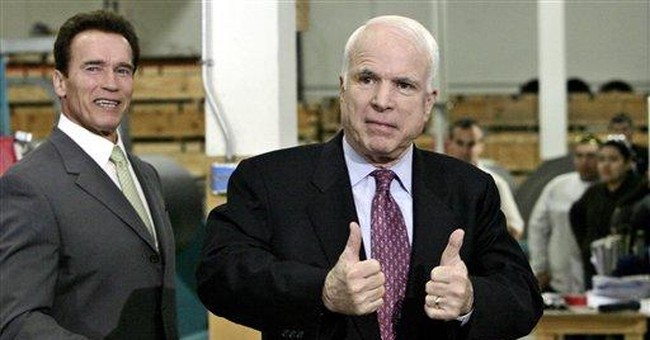 Until last night, when I watched the Republican debate, I had no idea how much John McCain dislikes me and just about everybody else but Rudy Giuliani, who if you believe The New York Times is a pretty good hater himself.

As I watched McCain and Governor Romney go at it during the debate at the Reagan Library I was struck by the huge gap that separates McCain -- whose contempt for his fellow humans is patently obvious -- and my dad, Ronald Reagan, who had nothing but the deepest affection and respect for the American people.

The feeling is mutual between McCain and me. I don’t like the way he treats people. You get the impression that he thinks everybody is beneath him. He seems to be saying, “I was a war hero, and you had damn well better treat me as your superior.”

He has contempt for conservatives who he thinks can be duped into thinking he’s one of them, despite such blatantly anti-conservative actions as his support for amnesty for illegal immigrants, his opposition to the Bush tax cuts which got the economy rolling again, and his campaign finance bill which skewed the political process and attacked free speech.

I am appalled by his contempt for the intelligence of his listeners when he flat-out lies and expects them to believe what he says even when the truth is staring them in the face.

A prime example cited by columnist Robert Novak was McCain’s denial that he had privately suggested that Supreme Court Justice Samuel Alito was too conservative, insisting that he recalled saying no such thing, adding that Alito was a "magnificent" choice.

“In fact,” wrote Novak, “multiple sources confirm that the senator made negative comments about Alito nine months ago.”

In last night’s debate, McCain stubbornly defended his charge, false on the face of it, that Romney wanted a deadline for withdrawing U.S. troops from Iraq.

"I have never, ever supported a specific timetable" for withdrawing troops, Romney said, adding that McCain's accusation on the eve of Tuesday's primary "sort of falls into the dirty tricks that I think Ronald Reagan would have found reprehensible."

What Romney said last April, was merely that U.S. and Iraqi leaders "have to have a series of timetables and milestones that they speak about" in private, which in no way suggests he was in any sense talking about troop withdrawals.

Despite the evidence, McCain charged that "of course he said he wanted a timetable" for a withdrawal, even though he had never said any such thing. It was McCain daring to ask us if we wanted to believe our lying eyes or his demonstrably false allegation.

McCain must think conservatives are dumb enough to allow him to get away with claiming he’s one of them. This is from a man who opposed drilling for oil in the Arctic National Wildlife Refuge in Alaska and who twice voted against President Bush’s tax cuts and sponsored the campaign-finance reform legislation that Romney claimed "took a whack at the First Amendment."

In John McCain’s eyes, conservatives are the Viet Cong of this generation and he treats us as such. It’s either his way or no way.

I despise his habit of talking down to us, like a wise father to an idiot son. He’s just at a loss to understand why everybody doesn’t grovel at his feet and accept his every word as wisdom handed down from his lofty perch atop Mt. Olympus.

I can’t help it. I know in my heart he hates me, and every conservative. If he gets the nomination the only way he could win against Hillary or Barack Obama would be to be part of a McCain-Limbaugh ticket.