Michael New
|
Posted: Jul 23, 2019 8:55 AM
Share   Tweet
The opinions expressed by columnists are their own and do not necessarily represent the views of Townhall.com. 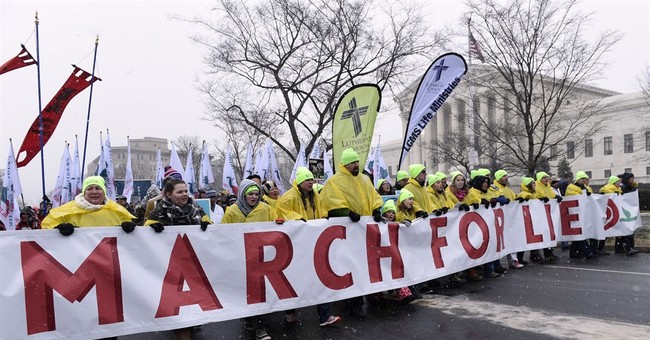 Last week, The New York Times covered a recent abortion study by Caitlin Myers of Middlebury College and two reproductive health researchers. This study analyzes how a future reversal of Roe v. Wade would impact abortion rates in various parts of the country.  The study looked at how recent abortion facility closures in Texas affected abortion rates in different regions of the state. They use this data to predict abortion rates in different parts of the country if Roe is overturned and conservative states outlawed abortion. Overall, the researchers predict that a reversal of Roe v. Wade would prevent over 100,000 abortions annually.

There are two very important lessons for pro-lifers here. First, this study adds to a body of research which shows that the incidence of abortion is sensitive to its legal status.  As such, the reversal of Roe v. Wade would likely save thousands of unborn children every year.  Second, the overall U.S. abortion rate might only drop moderately in the short term since many blue states with high abortion rates would likely fail to enact laws to protect the preborn. As such, while reversing Roe is clearly a worthy goal, pro-lifers will still have plenty of work to do building a culture of life in politically liberal states.

While the study is certainly analytically rigorous, there are aspects of the methodology that are debatable.  For instance, the authors predict that 21 conservative states would legally restrict abortion if Roe v. Wade were overturned.  However, public policy does not always perfectly reflect the preferences of political actors.  Indeed, internal debates between either state level pro-life groups or pro-life legislators might well delay the enactment of pro-life legislation in some states. Furthermore, there are other states that might not ban abortion, but might enact additional incremental pro-life laws in the aftermath of a Roe v. Wade reversal.  Myers and her co-authors fail to account for this.

Furthermore, it is possible that reversal of Roe v. Wade may still impact the incidence of abortion in blue states that would refuse to take legislative action to protect the unborn. The damage of the Roe v. Wade decision went beyond legalizing abortion in all 50 states. Roe v. Wade gave expansive abortion rights widespread political and cultural legitimacy.   The law is a teacher and there is some evidence that public support for legal abortion increased after the Roe v. Wade decision was handed down.   An overturn of Roe v. Wade might have the reverse effect.  It is possible that some people who are confident in their support for abortion when it is legal everywhere, might lose some confidence once some states take legislative action to protect the preborn. This might affect abortion rates everywhere.

Overall, pro-lifers have made some impressive progress building a culture of life.  The U.S. abortion rate has fallen by 50 percent since 1980 and is now lower than what it was when Roe v. Wade was decided in 1973.  A large factor in this decline is the fact that a higher percentage of unintended pregnancies are being carried to term.  I cite this statistic often because it nicely shows that pro-life educational, legislative, and service efforts have all been effective. A reversal of Roe would be a tremendous judicial victory as it would extend legal protection to literally thousands of innocent unborn children.  However, it is important for pro-lifers to understand that this is only a starting point. If Roe v. Wade is overturned pro-lifers will have no shortage of work to do building a culture of life in many parts of country.