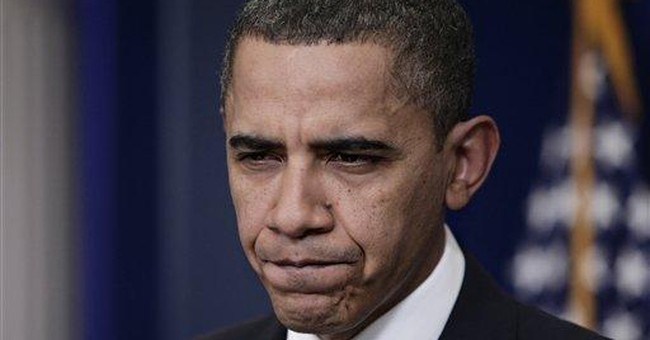 In warfare and in political warfare, underestimating your opponent amounts to a terrible, often fatal mistake. That's why conservatives who deny or ignore the president's obvious intelligence imperil their own cause and prevent the emergence of an effective anti-Obama strategy. For Barack Obama, his brain power makes him dangerous but also creates a special vulnerability that his critics should exploit.

On the most obvious level, it makes no sense to insist (as many of my radio callers and internet correspondents do) that a guy with degrees from Columbia and Harvard Law (magna cum laude), and with a successful twelve-year stint as a professor of Constitutional law at the University of Chicago, amounts to some sort of dunce who didn't deserve his academic success. The Democrats made similarly silly assumptions about George W. Bush, claiming that his BA from Yale and his MBA from Harvard Business School stemmed only from family connections rather than personal ability or hard work. In Obama's case, some right wingers argue that he got his Ivy League credentials through affirmative action and race preferences. It's true that favored minority groups may receive special encouragement at elite universities, as do alumni children with multi-generational connections to the institutions in question. But unless an applicant counts as at least reasonably bright in his own right, neither ethnic identity nor parental pull can assure admission, let alone graduation. Even among targeted minority groups or alumni children, those who succeed at top flight, competitive universities constitute a distinct minority.

Moreover, with President Obama three other factors argue powerfully that he's a genuinely intelligent individual no matter how misguided his political priorities and outlook.

First, there's the evidence of his two bestselling books, Dreams of My Father (1995) and The Audacity of Hope (2006). Regardless of their uneven and tendentious content, both volumes display considerable literary school and even poetic flair, as well as a sharp, powerful and occasionally original mind at work. Meanwhile, the claims that ghost writers actually prepared this work make no sense, especially for the first book, which Obama began while still in law school. He faced considerable difficulty and long delays completing the manuscript and lacked either the financial resources or the celebrity status (despite a flurry of publicity surrounding his election as the first black president of Harvard Law Review) to secure the services of some professional scribe to write it for him. The widespread claims that one-time Weatherman terrorist Bill Ayers secretly collaborated with Obama claims that I discussed on my radio show during the campaign have become increasingly implausible in view of the bitter split between the one-time colleagues. Ayers has been bitterly critical of Obama from the left, and the presidents dismissal or denial of their long-standing friendship might have easily provoked Ayers to reveal his involvement in writing the book if any such involvement actually existed.

Moreover, Obama's books sound very much like the Obama of the big speeches: grandiose, self-important, verbose, melodramatic and impressive. Yes, the president seems incapable of delivering these addresses without the aid of his omnipresent teleprompter but he surely played some prominent role in their composition. In his interviews (like the most recent sit-down with Katie Couric) or rare off-the cuff remarks Obama does deliver more than his share of ummms and you knows, along with occasionally clumsy constructions (The Middle East is a problem that has plagued that region for centuries, he emphatically declared in Tampa). More importantly, the president often offers answers that count as misleading, demagogic, vacuous and even downright dishonest. But no one who listens to an entire interview, or a full press conference, can reasonably conclude that the man is a fool or an inarticulate lug. Obama at his worst is still glib, slick and quick, even deft, in responding to the admiring press corps as well as to indignant critics (as in the revealing interchange at the recent House GOP retreat).

The third reason to assume Obama's intelligence is parentage: since IQ counts as a highly hereditable human attribute it's important to note that both his birth parents, despite their emotional troubles, displayed indications of real brilliance. His Kenyan father qualified for Phi Beta Kappa as an undergraduate, then earned a graduate economics degree at Harvard. His mother went on to a PhD, and even his banker grandmother studied at two elite universities (Berkeley and the University of Washington) at a time when few women competed successfully in academia. Obama's dishonest tendency to portray himself as arising from an impoverished, disadvantaged background may make his cleverness seem anomalous, but given his high-achieving ancestry on both sides it would be more far-fetched to assume that Obama didn't inherit at least some of the mental acuity of his forebears.

Finally, there's another practical reason for conservatives to avoid disparaging Obama's smarts: such attacks expose us, inevitably, to charges of racism. That's especially true since most of us on the right expended considerable energy and credibility defending the brain power of George W. Bush, Dan Quayle and Sarah Palin, regardless of their frequent lapses and stumbles. If we properly insist that our allies count as smart and capable, despite their sometimes awkward and goofy self-presentation, then don't we raise suspicions when we claim that Obama's actually an idiot, despite his generally slick and persuasive public persona? With our own people, we want the public to ignore unflattering superficialities, and with the president we want the public to ignore flattering surfaces.

When we acknowledge that President Obama displays high intelligence and considerable sophistication we concede nothing of political value. The American people never vote on the basis of intelligence, and often count preening intellectuality of the Obama sort as a potent liability, not an advantage. Ronald Reagan crushed Jimmy Carter in a landslide of historic proportions, in spite of the Republican's reputation as a dummy actor and the Democrat's background as a brilliant nuclear (not nuke-cular) scientist.

Democrats regularly make the error of dismissing the intelligence of their rivals or misunderestimating the opposition, as George W, Bush described it. They wrote off Eisenhower as a senile, foolish, military careerist, while incessantly mocking Gerald Ford (despite a degree from Yale Law), Ronald Reagan (joking endlessly about his B-movies like Bedtime for Bonzo, and George W. Bush, suggesting that the president's appalling stupidity made him almost subhuman). Currently flourishing websites still specialize in highlighting the similarities between the W. (also known as Chimpy McBush) and various apes.

None of these attacks did serious damage, because the American people understand the profound, all important difference between intelligence and smarts. Theyre indifferent to the former and deeply drawn to the latter. Woodrow Wilson, Jimmy Carter and Al Gore were all highly intelligent, but they werent at all smart. Truman, Reagan and Bush on the other hand may not count as intellectual, but they were indisputably smart. The public knows that some of our most revered presidents (George Washington, Andrew Jackson, Abraham Lincoln, Harry Truman) never attended college but handled the challenges of the presidency in a clever, sensible style.

Sarah Palin is on the right track to deride President Obama as a professor at the lectern when it comes to confronting terror. The public despises preening intellectuality as a form of elitism, so we should encourage Obama to seize the mantle of intellectual whenever he's foolish enough to use it. That pose will always strike ordinary Americans as more alienating than appealing. If he wants to lord it over the general public by emphasizing his mighty mind and wide-ranging education, then conservatives should by all means get out of his way. His view of himself as a 21st Century philosopher king, too brilliant for the daily grubbiness of politics, may impress his admirers in faculty clubs and media green rooms but in the long term can contribute only to the further unraveling of his already troubled administration.