The Only Way to Beat Obamanism: Elect More Republicans 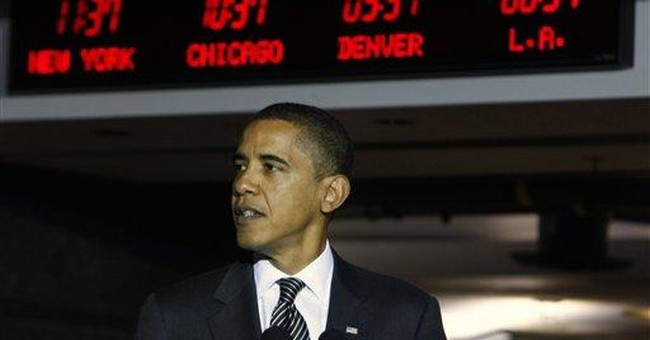 For those Americans who want to fight back against the menacing expansion of government and the insanely irresponsible spending of the Obama administration, there is only one way to succeed: electing more Republicans to high office.

If the public fails to elect GOP candidates for the Senate, the House, governorships, state legislatures and, ultimately, the presidency there is simply no way to derail the leftist agenda that menaces liberty and prosperity.

Many sincere patriots will object to this formulation, insisting that we must elect more conservatives, not just more Republicans.

The question then becomes, if the needed conservative candidates arent running as Republicans, what party would they represent? If theyre conservative Democrats (a designation that increasingly seems like a contradiction in terms) their election to the House and Senate would return Pelosi and Reid to power along with their ultra-liberal, Democratic committee chairs like Rangel, Conyers, Frank, Dodd, Leahy, Kerry, Waxman, and so forth. President Obamas ability to bully Blue Dog Democrats to do his bidding shows that empowering even those Democrats who describe themselves as independent minded only serves to strengthen the hand of the reigning leftists in the nations capital. Does the fact that Democratic Senator David Casey of Pennsylvania happens to be pro-life make him any less a reliable cog in the Obama machine as it lurches through record deficits and the relentless growth of government?

Of course, some purists insist that true conservatives will never identify as either Republicans or Democrats and will instead win office as independents or representatives of fringe parties (say the Libertarians, or the Constitution Party). This supposition ignores the consistent record of failure for third and fourth and fifth party candidates at every level for more than 200 years of American history. Occasionally, quirky free spirits will win governorships as independents (like Angus King of Maine, or Lowell Weicker of Connecticut, or the notorious Jesse Ventura of Minnesota) but these exceedingly rare victories never bring political realignment or the emergence of a new party infrastructure (Maine, Connecticut and Minnesota have long-ago returned to Democratic or Republican rule, demonstrating that their third-party flirtations represented flukes, not breakthroughs). In Congress and the Senate, the only independents in recent decades have been representatives from New England (Bernie Sanders of Vermont, Joe Lieberman of Connecticut) who end up caucusing with the Democrats in any event.

Even if some miracle occurred and some new party elected five, ten or even twenty members of the House and Senate (a virtual impossibility), what difference would it make if the Democrats maintain their majorities? Any independent or minor party candidates who beat the odds and win election to the House or Senate will face the choice of caucusing with one of the major parties, or else making themselves isolated and irrelevant as Congress goes about its business.

Meanwhile, concerned citizens who seek to influence events with demonstrations, petitions, tea parties, boycotts, letter-writing campaigns or marches on Washington will succeed only if the party in power faces a credible challenge from the opposition. If politicians see no plausible threat that they will lose their seats, they can cheerfully ignore mass meetings and citizen activism as they win automatic re-election from their committed supporters. An internally divided, cynical conservative movement scares big government liberals far less than a hopeful, united coalitionthat emphasizes common principles rather than shortcomings or minor disagreements. This means that those media commentators and conservative organizers who turn away from the GOP in frustration and contempt only undermine the impact of the mass protests they encourage. When activists and media personalities say we hate both major parties equally, and the Republicans are no better than the Democrats it doesnt scare the liberals in power it reassures them. When Democrats hear conservatives running down the GOP, they take the conservatives less seriously, not more so a political ideology without an institutional home or a guaranteed place on the ballot looks far less formidable than a major party that still commands vast resources of money and organization.

These difficult times demand brutal candor and the acceptance of unpleasant realities. Gathering hundreds of thousands of people, designing witty anti-Obama signs, and dressing in Colonial costumes wont stop or even slow the drive toward a federal takeover of health care. Only one strategy can turn back the federal power grab: assembling 51 courageous votes in the United States Senate (or 218 in the House of Representatives).

Events like the recent March on Washington on September 12, or the Tea Parties across the country, can play an important role in rallying the conservative base, encouraging better candidates to take the field in the upcoming Congressional elections, or even pushing the Republican Party to the right in order to offer principled, clear-cut alternatives to Obamas leftism. The necessity of supporting one of the two major parties doesnt mean that you need to accept those parties as they are, or that people of conscience should give up efforts to improve the parties. Barry Goldwater moved the GOP in a sharply conservative direction in 1964, and Ronald Reagan indelibly redefined the soul of his party in 1980. But both these giants worked within the GOP and never bought the moronic logic that says you somehow influence a political organization most when you abandon it. On the other side, George McGovern in 1972 and Barack Obama in 2008 both challenged the Democratic establishment from the far left and captured control of their parties (and, in Obamas case, the nation).

If a candidate cant win a majority of GOP primary voters (who are almost entirely right of center) that candidate will never win a majority of the electorate at large (with its high percentages of liberals and mooshy moderates). By the same token, an extreme leftist who cant win Democratic primaries wont offer much of a challenge in November which is why Ralf Nader never even reached 3% of the vote in any of his four runs for the White House, and Dennis Kucinich never even tried a general election campaign.

The last resort of disgruntled conservatives who irrationally resist the iron logic of electing Republicans as the only counterweight to Obamanism usually involves some reference to the GOPs first president, Abraham Lincoln. Weve all heard the brain-dead mantra, havent we? It goes something like this: If Lincoln accepted your argument, and stayed loyal to the established party, he would have stuck with the Whigs and the Republicans never would have gotten off the ground. The GOP itself shows that third parties can be successful, and sometimes theyre needed!

Actually, the history shows nothing of the kind. For the record, let me lay out the simple facts (theres more detail in my 2008 book, The Ten Big Lies About America). Lincoln actually never broke with the Whigs he stayed with the party till the bitter end, supporting the last presidential candidate they ever fielded (Winfield Scott in 1852). By 1854, the old Whigs had collapsed to such an extent that they fielded few Congressional and Senatorial Candidates, and the newly organized Republicans (fielding candidates for the first time ever) swept to control of the House and solid opposition status in the Senate. In both chambers, the just-arrived Republicans outnumbered the few surviving Whigs more than three to one. In 1856 (just two years after the organization of the Republican Party) the Whigs ran no one for President and the GOP candidate (John C. Fremont) finished a close second. In other words, in no election were the Republicans ever a third party. They either vanquished the Democrats (as they did under Lincoln in 1869 and 64) or they ran second to them.

No third party in the history of the nation has ever won success on a national basis. Even the wildly popular ex-President Theodore Roosevelt drew only 27% of the popular vote when he ran as a third party contender in 1912, carrying only six of the 48 states.

The Republican Party, for all its faults (and they are legion, as with any other political organization) remains the only hope, the sole rallying point, for foiling the big government, anti-capitalist schemes of the Obamanauts. If conservatives manage to unify and revitalize the GOP it wont insure success in the struggle to restore Reaganite principles. But if we fail to coalesce around the one political institution capable of standing up to the resurgent Democrats then that refusal will most certainly guarantee long term conservative failure.