America's Teens: Not As Raunchy or Irresponsible as You Think 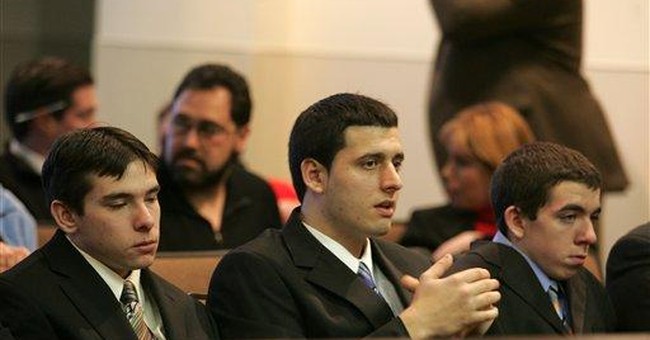 Why do so many otherwise reasonable people feel an odd compulsion to embrace the illogical and unsupportable notion of the nation's total moral collapse?

Despite irrefutable evidence of dramatically declining rates of crime, divorce, drug abuse, traffic accidents, smoking, abortion and even environmental pollution in the last twenty years, most Americans insist that the ethical state of the nation has never been worse. Doomsayers love to repeat the portentous line: "If God doesn't punish America sometime soon, He's going to have to apologize to Sodom and Gomorrah."

In fact, no chapter in my current bestseller THE 10 BIG LIES ABOUT AMERICA has inspired more controversy and indignation than the final one, in which I argue against the claim that "America is in the Midst of an Irreversible Moral Decline."

Despite the fact that prestige media outlets have generally supported this sensationalist and attention-getting lie, the New York Times recently filed an important report that helped place the situation in a more balanced perspective. On January 27, 2009, Tara Parker-Pope dismissed alarmist reports from the likes of Oprah Winfrey and Tyra Banks that the nation faced a "teen sex crisis." Under the headline, "The Myth of Rampant Teenage Promiscuity," Ms. Parker-Pope reported: "While some young people are clearly engaging in risky sexual behavior, a vast majority are not. The reality is that, in many ways, today's teenagers are more conservative about sex than previous generations."

She cites a number of startling and unexpectedly reassuring statistics:

--The National Youth Risk Behavior Survey recently showed that the majority of all high school students, both male and female, remained virgins. In 2007, only 47.8% had ever had sex –a sharp drop from 54.1% in 1991.

-- Meanwhile, a 2002 report from the Department of Health and Human Services also showed that teenagers seemed more determined to postpone their first sexual encounters. Only 30% of 15-to-17 year old girls had experienced sex—dramatically down from 38% in 1995. In the same period (just seven years, remember), the percentage of sexually experienced boys in that age group declined from 43% to 31%.

- Younger teenagers also showed significant decreases in sexual experimentation. In 1995, an alarming 20% said they had had sex before age fifteen, but by 2002 the numbers decreased to just 13% of girls (and 15% of boys).

According to Professor Kathleen A, Bogle of the sociology department at LaSalle University: "There's no doubt that the public perception is that things are getting worse, and that kids are having sex younger and are much wilder than ever before. But when you look at the data, that's not the case."

According to Maria Kefalas, professor of sociology at St. Joseph's University in Philadelphia, "this whole moral panic thing misses the point." Dr. Bogle reports that "I give presentations nationwide where I'm showing people that the virginity rate in college is higher than you think and the number of partners is lower than you think and hooking up more often than not does not mean intercourse. But so many people think we're morally in trouble, in a downward spiral and teens are out of control. It's very difficult to convince people otherwise."

In fact, the members of "The End is Near" crowd will seize on any scrap of evidence to support their alarmist perspective. In January, ABC News highlighted a slight rise in the teenage birthrate, and seemed ready to attach some of the blame to 18-year-old mom, Bristol Palin. The report noted that "Palin's home state of Alaska one of 16 states to see a rise – led the way, with a 19 percent increase in the teenage birthrate from the previous year."

Of course, this disturbing number obscures the fact that the overall national increase (measured by the U.S. Centers for Disease Control and Prevention) measured only 3%. What's more, that slight uptick came after fifteen consecutive years of decline in the rate of teenage births—a period that saw a spectacular overall reduction of more than one-third. Bill Albert, chief program officer for the National Campaign to Prevent Teen and Unplanned Pregnancy, called this progress "one of the nation's most extraordinary success stories of the past two decades….where we had nothing but good news to report for almost two decades". Even this expert in the field to teen pregnancy prevention seemed puzzled by the new data. "We've never known exactly why the rates have decreased so dramatically, and I don't think we'll ever fully know why they've gone up here."

Amazingly, all of the heavy-breathing stories about the sudden (and slight) rise in teen motherhood focused on convenient and high-profile scapegoats, ranging from Governor Palin's precocious daughter Bristol (who recently called abstinence "unrealistic" in a TV interview), to the acclaimed movie "Juno," to abstinence education itself. The journalists failed to mention, however, the one most obvious and logical explanation for the rise in the pre-twenty birthrate: it reflected a sharp increase in fertility and childbearing for women of all ages, all races, and all economic situations. The general fertility rate hit its highest level since 1971 – showing a one year-increase among older women at least as notable as the rise among teenagers.

In other words, the rising number of teenage mothers connects with the rise of motherhood in general – and the dramatic decline in abortion. The rate of pregnancies ending in abortion has gone down by nearly one third since its peaks at the end of the '70's and the beginning of the '80's.

In this context, the small increase in teenaged births doesn't demonstrate a breakdown of moral discipline among the young, but rather shows the society-wide improvement in attitudes toward human life and child-bearing. In every age group, women proved more eager to welcome babies and far more reluctant to terminate their pregnancies with abortion.

These ongoing arguments about the nation's moral health carry far more than abstract or academic significance. The insistent claims of collapse and corruption can become a self-fulfilling prophecy, conveying the notion that it's impossible to stand strong against the tectonic shift toward self-indulgence and promiscuity. The endlessly repeated notion that the disrespectful younger generation displays no restraint and no responsibility (a claim repeated by middle-aged parents of every era of human history) only serves to encourage teenagers to abandon any efforts toward self control. If ethical decline is indeed universal and inevitable, why should any youngster attempt to struggle against it?

It's far healthier for our children, and for society at large, to emphasize the good news as well as the bad and to affirm the principle that, in America, no negative trend is ever irreversible. Concerning the misleading portrayals of youngsters as heedless hedonists with lurid, lubricious sex lives, we owe it to our kids and our country to put the situation in a more honest perspective. As the 1960's rock band The Who so memorably insisted: The Kids Are Alright.