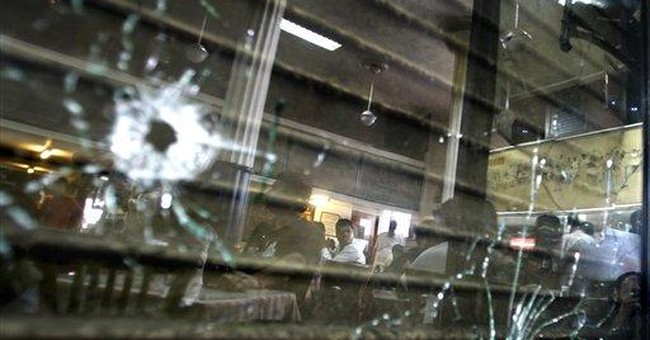 The savage terror attacks in Mumbai send three powerful messages to all Americans who are willing to pay attention:

1. The threat of Islamo-Nazi terror remains real and urgent, and Americans must not take our safety for granted. While both the public and the president-elect focus almost exclusively on our dire economic challenges, we tend to dismiss the possibility of new terrorist attacks on American soil. Exit polling after the presidential election showed that less than one-in-ten considered terrorism a serious issue for the candidates; the unheralded but significant success of the Bush administration in the seven years since 9/11 has lulled the American people into a false and foolish sense of security. The experience in Mumbai shows the way that a small handful of determined and well-trained fanatics can murder hundreds, while paralyzing the financial center of India for several days. When we worry at all about the ongoing Islamist threat, we worry most about spectacular, high tech attacks involving weapons of mass destruction or hi-jacked airplanes, but the recent Indian assaults show the way that low-tech methods (involving guns, grenades, and simultaneous strikes) can produce a comparably devastating impact. For years, terrorism experts have warned against the possibility of coordinated attacks at, say, busy shopping centers at the height of Christmas season. Imagine the result if little squads of four gun-men each decided to hit shopping centers in ten different cities on the same day, at the same hour, killing as many innocents as possible before police could put them down. The damage to our already fragile economy could be nightmarish, while severely harming our national morale. Our safety (so far) from such relatively easy attacks reflects the heroic effectiveness of our military, police, and intelligence services and the importance of a pro-active, pre-emptive policy in confronting the continued threats against us.

2. Cutting funds and reducing focus on counter-terror efforts produces devastating, deadly results. In May, 2004, India's left-leaning Congress Party took control of the government from the BJP ("Hindu Nationalists"), with overwhelming support from the nation's substantial Muslim minority (some 150 million strong). Congress pledged to cut money from counter-terror efforts and security forces, while doing more to address the concerns and to win cooperation from angry, dissatisfied Muslims who complained of their own persecution. The result of this new policy has been an unmitigated disaster --- with more than 4,000 deaths from terrorist attacks in the last four years, which amounts to more casualties than any other nation on earth other than Iraq. The Indian experience should send a powerful message to Americans who believe that we will somehow be safer from closing Guantanamo, cutting back on intelligence gathering, doing more to protect Islamist rights and generally employing a kinder, gentler approach to the war on terror. Comparing India's experience in the last four years to the situation in the United States shows the necessity of treating terrorism as a world-wide war, not just a problem of law enforcement. After the slaughter in Mumbai, with courageous commandos among the slain, public disgust with the "moderate" approach of the Congress Party will likely produce an appropriate tidal wave of disgust in upcoming national elections. With the sources of terror obviously located in neighboring (and nuclear armed) Pakistan, as well as the restive domestic Muslim population, Indians understood the importance of resolute confrontation against the forces of Islamism and the need for their leaders to call evil by its rightful name.

3. Islamist extremism is at its core fiercely, fanatically anti-Semitic--- not just opposed to specific Israeli governments or particular western policies. Apologists for Islamo-Nazi terror try to describe it as an inevitable response to American imperialism or Israeli "occupation" policies. The Mumbai atrocities highlight the absurdity of such claims. Local Muslim communities in India and Pakistan (which alone supplied the killers this time) bear no connection with Israel at all and no connection with America, other than receiving abundant American aid and business (showered on India and particularly on Pakistan). Neither the United States nor Israel has played any role in the ongoing dispute between Hindus and Muslims over control of the remote, mountainous territory of Kashmir—the main point of agitation for the Mumbai killers—and yet those killers nonetheless made a point of targeting Americans and Jews. The specific focus on the peaceful, unarmed, social service/religious operation at Chabad House demonstrates that the Islamists count as fanatical, anti-Semitic Nazis, not just anti-Zionists or anti-imperialists. The total Jewish population of Mumbai was less than 4,000, before these attacks--- barely .0002% of an overall population of 19,000,000. The targeting of this miniscule, quiet and obscure community shows the importance of describing the extremists as Islamo-Nazis, not Islamo-Fascists. Like the Nazis, and unlike other Fascist organizations in Italy and Spain, the Islamists embrace Jew-hatred as an essential, inseparable element of their very identity. Authorities in Mumbai say many of the bodies of hostages show signs of grotesque and indescribable torture, but the Jewish victims – particularly the women – apparently suffered even worse than the others. There's obviously no substance at all to the notion that the kindly, selfless and deeply religious personnel at Chabad House (who concerned themselves with providing kosher food, visiting the sick, performing weddings, and studying religious texts) somehow connected with Islamist complaints over Kashmir. The West needs to understand that Islamo-Nazis feel motivated by implacable hatred for all Jews (and all Christians) rather than objections to particular elements European or American or Indian culture or policy.

For the incoming Obama administration, the Messages from Mumbai should register with decisive clarity. A friendlier tone in Presidential pronouncements, or conciliatory gestures (like closing Guantanamo) will do nothing to placate or discourage our most dedicated enemies. In the struggle against Islamo-Nazis, just as with the struggle against Hitlerism or Stalinism, there is no substitute for victory.