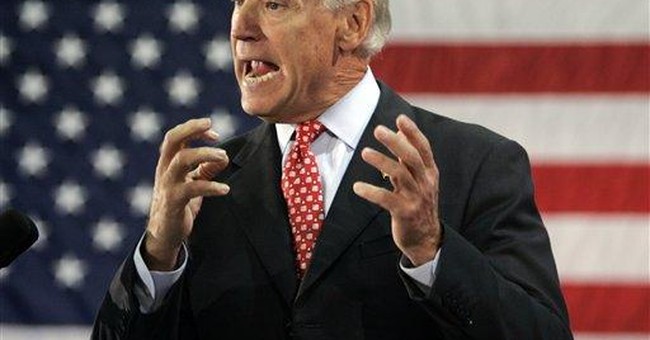 If a candidate for high office does a spectacularly poor job in managing his own family's finances, why on earth should we trust him in a national leadership position at a time of acute economic crisis?

Senator Joe Biden's recently disclosed tax returns display a consistent pattern of poor judgment and shabby values that ought to disqualify him for the vice presidency or any other post of significant responsibility.

Over the course of ten years (1998 through 2007) the Bidens averaged an adjusted gross income of $245,000 – placing them uncomfortably close to that threshold of $250,000 a year that Senator Obama considers “wealthy” and deserving of sharply increased taxes. In several years during the last decade Biden and his educator wife Jill definitely entered into that privileged territory, reporting income of $319,853 last year (and even more in 2005).

Despite this impressive revenue stream (including a recent six-figure advance for his unreadable—and unread – memoir “Promises to Keep”), Senator Biden has managed to save almost nothing for his own retirement of to benefit his children and grandchildren. In 2007, when announcing his second presidential bid, he reported a total net worth of $100,000 to $150,000, making him the least prosperous member of the U.S. Senate. As the Washington Post sympathetically observed: “Biden has spent virtually his whole life in public service and does not have much else aside from a small array of mutual funds and cash accounts.” In June of 2008, he even listed significant liabilities including a loan up to $50,000 against his life insurance policy and line of credit indebtedness of more than $100,000 to the Wilmington Savings Fund Society.

At the time of his selection as Senator Obama's running mate, some of his Biden's die-hard fans took perverse pride in his shaky financial situation. But why should any American feel proud of reaching retirement age (Biden will turn 66 this November) without accumulating notable savings, assets or property? A normal, hard-working middle class wage-earner who put away a few thousand dollars a year in a tax-sheltered IRA or 401K would have achieved several times Biden's net worth through the magic of regular investment and compound interest. What sort of irresponsible flake averages $245,000 in annual income (plus lavish expense allotments from the U.S. Senate) while spending nearly all his compensation and diverting next to nothing to the family's long-term security? What, exactly, did the Senator do with the literally millions of dollars he earned in recent years? The one possible explanation that's easiest to rule out is the notion that he gave away his wealth to charity. Between 1998 and 2007, his adjusted gross income never dipped below $210,797, but his charitable giving never exceeded $995 (while actually dipping as low as $120 – a paltry $10 per month). In other words, the Bidens' charitable contributions always remained well below three-tenths of one percent of their adjusted gross income – or one-thirtieth of the familiar standard of tithing upheld by many people of faith. Arthur Brooks of Syracuse University, author of “Who Really Cares?”, orstartly observed: “On average, Biden is not giving more than one tenth as much as the average American household, and that is evidence that he doesn't share charitable values with the average American. In place of individual initiative or communal responsibility for assisting the less fortunate, Biden strongly prefers to rely on governmental compulsion. The Senator recently told Kate Snow of ABC news that he considered raising taxes a form of patriotism. “It's time to be patriotic,” he solemnly intoned. “Time to jump in, time to be part of the deal, time to help get America out of the rut.” Apparently it wasn't “time to be part of the deal” in previous years, or else he considers givings home, willingly to charity inherently less patriotic than involuntary seizure of income by government In any event, Biden's refusal to help his neighbors without a federal directive to do so puts him at odds with the instinctive generosity of ordinary Americans, as does his ongoing reliance on Washington bureaucracy to provide for his every need. For thirty six years – since his initial election to the Senate at age 29- Biden's been one of 100 members of the “Most Exclusive Club in the World” with all the privileges and prerogatives associated with that status. Senators receive generous travel allowances, the support of lavish, well-paid staffs to cater to your every need both in the Capitol and on visits home, gold-plated family medical benefits and a stunningly lucrative pension program that most corporate executives would envy. Many United States Senators (and other top officials) look with favor on the ideal of a protective “nanny state” because they cherish its indulgent benefits in their own lives.

For Joe Biden, there's been little impetus to build a personal nest-egg or to plan for his retirement because Uncle Sam has always been there to take care of him. He feels no need to devote resources to private charities because he lives in a Beltway bubble where bureaucrats on the federal payroll can salve all guilty consciences by busying themselves with officious projects of cradle-to-grave “compassion.”

Still, Biden's inept handling of his personal finances, and his even more pathetic failure to contribute his resources to communal organizations, demonstrate an appalling lack of judgment and maturity. The records shows his emphatic rejection of the American dream of steady, slow economic advancement by restrained spending and regular saving. Americans who've achieved personal wealth seldom reach their goals through winning the lottery, or making sudden millions with a big, dramatic score. Far more commonly, the “millionaires next door” (to borrow a phrase from an influential bestseller) advance the interests of their families and their country through patience, hard-work, and long term planning.

Joe Biden may see his failure to provide for his own future as a point of connection with the vulnerability of many stressed and over-extended Americans but do we really need a Vice President of the United States to serve as a negative role model or warning example? A legislator (and loser) who fails to consider the long-term horizon in his own affairs represents a conspicuously terrible choice to safe-guard the future for 300 million of his fellow citizens.