Michael Hausam
|
Posted: Jan 01, 2016 3:45 PM
Share   Tweet
The opinions expressed by columnists are their own and do not necessarily represent the views of Townhall.com. 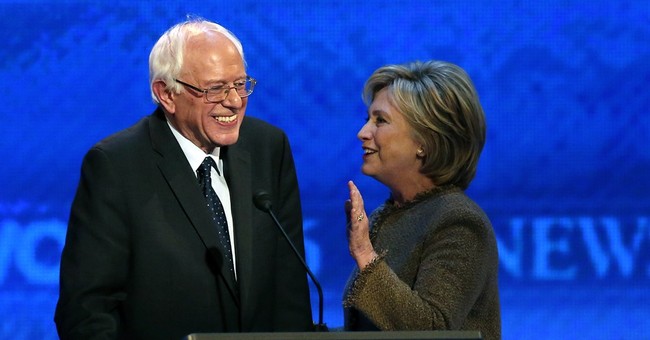 I spent some time on Hillary Clinton and Bernie Sander’s websites, waiting for the ball to drop. I was inspired.

With as much reach-across-the aisle moderation and coalition-building attitude as possible, I compiled a few 2016 political resolutions. The issues are basically copy and pasted from H-Rod and Bernie’s sites. The fleshed-out details are mine.

Paint me a kumbaya-crooning hopeful idealist if you must, but these are truly and honestly the things that I’m hoping will occur:

There is too much gun violence and there are too many murders. Merely banning guns or restricting the purchasing of scary looking guns, however, will make almost no impact on this. Bad guys already have guns or can easily arrange to get them. The way to do it is to increase the likelihood, or the perceived likelihood, that a gun-wielding criminal will be unsuccessful in carrying out their crime. Or even that they might be shot or killed in the process.

Loosened concealed and open carry laws, however, will perfectly address this point. In other words, “Concealed Carry Weapon Zone” signs utterly change the calculation of a potential perpetrator whereas a “Gun Free Zone” sign reassures their safety. Most criminals do not want to die and if they think that they might, many will change their mind.

A single-rate tax on income, with no breaks, deductions or credits, focused solely on generating revenue, would do the trick. The other option would be to enact a national sales tax and eliminate a tax on income or assets altogether. The productivity unleashed by either of these would be staggering.

Of course, the silliest way to get a national minimum wage is to legislate it. The best possible way is to foster a thriving economic environment such that businesses have to increase the wages they offer in order to attract the talent they seek. With a substantial rate of growth, overall demand for workers it will outstrip the supply of them. The invisible hand of the market will force companies to increase the income they offer to get people to take the jobs.

Government must get out of the way of business and stop punishing, controlling, managing, or redirecting them. Unleashing the power of the American capitalist system is by far and away the best way to increase incomes across the board.

The proper way to do this is to firstly understand that it is not a right. Rights cannot include forcibly taking money or services from one group and giving them to another. The second way to do this is to allow the creativity of those wishing to earn a living in this sector to provide a menu of insurance products or services that are judged solely by whether anyone buys them. No more D.C.-based requirements or coverage minimums.

If someone in California wants to buy the health insurance equivalent of a 1981 Toyota from a vendor in Maine, so be it. If someone else in Florida wants to buy a customized Italian exotic in Washington, that should be OK too. Another key is to connect the purchaser of the medical service directly to the provider. The more health services are purchased like any other consumer good, with one’s own dollars, the greater the pressure for price and value parity. People are most careful when they are spending their own hard-earned money.

Imagine a world in which banks and financial institutions had to cover their own losses? If lenders had to pick borrowers on the basis of their ability to repay loaned funds, without concern for homeownership figures or race-focused disparate impact lawsuits, it would be a completely different marketplace.

Finance and all of its associated industries are the fuel that capitalism requires. Without stocks, bonds, and other similar instruments, the economy would halt. On the other hand, if reward – and risk – were allowed to freely exist without Federal mandates, edicts, guarantees, fine-tuning, power struggles, and oversight from those uninvolved, institutions could live or die based solely upon the marketplace’s judgment on their product and services. And overseers to oversee the regulator’s overseer would be superfluous.

Get Money Out of Politics

Cronyism and insider dealing is the coin of the realm for American commerce these days because government is so incredibly involved. Every significant business in America has offices or representatives in D.C., working hard to curry as much favor or legislative benefit as possible.  They do so as it is way easier and far less expensive to bend the playing field, via regulation or edict, than to actually compete. They go to Washington because that’s where the money really is. And the power.

The federal government must get out of the carrot and stick business, the economic planning business, altogether. If the business of business were nobody’s business in Washington, the massive attempts to influence and change it would disappear overnight.

There are people of retirement or near-retirement age who have planned on it being there for them. And it absolutely should. For everyone else, however, the federal government should exit the income and asset redistribution business.

To allow and encourage private savings and investment accounts, with no contribution limits or caps, would render social security obsolete. Then, in a few years, it could be completely jettisoned and placed in the wastebasket of failed ideas.

War As A Last Option

Unfortunately, there are evil people in the world who do not value freedom and liberty and are making every possible effort to bring us harm. Until we absolutely have to resort to violence, we should attempt to make peace and avoid conflict. But, if that is not possible, we should then rain down every possible manner of horrific violence upon them in as brutal and overwhelming fashion as possible. This is the only moral way to wage war and force it to a quick close.

If these wishes actually come true in 2016, I’ll owe Hill and Bern a big fat thank you for inspiring them!