Warning: This May Be Interpreted By Some As Extremely Microaggressive 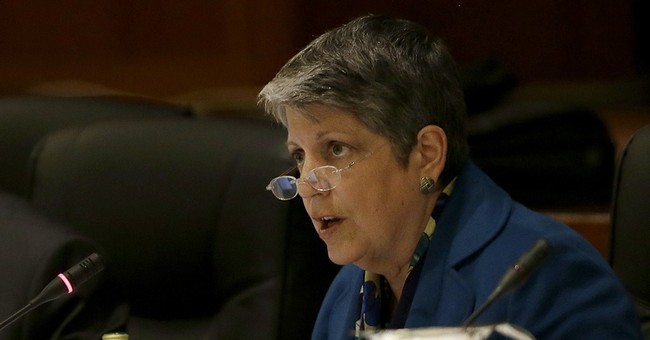 Janet Napolitano, the former governor of Arizona and Department of Homeland Security head, now the President the University of California system, has launched a new faculty training initiative. Part of the curriculum is a document titled "Recognizing Microaggressions and the Messages They Send." And it's worth some further evaluation.

"Microaggressions are the everyday verbal, nonverbal, and environmental slights, snubs, or insults, whether intentional or unintentional, that communicate hostile, derogatory, or negative messages to target persons based solely upon their marginalized group membership (from Diversity in the Classroom, UCLA Diversity & Faculty Development, 2014). The first step in addressing microaggressions is to recognize when a microaggression has occurred and what message it may be sending. The context of the relationship and situation is critical. Below are common themes to which microaggressions attach."

The document then lists a series of themes, such as "Alien In One’s Own Land," "Ascription of Intelligence," "Color Blindness," and "Myth of Meritocracy." Next to the themes, it gives examples of the microaggression within that category, and then an interpretation of the message sent.

Let's take a look at a few of examples of microaggressive statements and, assuming we can refrain from clutching our pearls to death upon reading them, determine if they are truly "slights, snubs, or insults."

“I believe the most qualified person should get the job.”

The key to understanding whether this is a true statement or an actual microaggression depends on the definition of "most qualified." As pointed out in the introductory paragraph, context and situation is critical.

Historically, the phrase would describe a person who is most capable of handling the responsibilities corresponding to the position. They might have even have a resume or work history that demonstrated the appropriate skills and ability. The evaluation of their qualifications would be directly related to the job itself.

However, in today's America - and best positioned to understand would be those with experience working for a government bureaucracy or a non-profit community organizing co-op - an alternate definition for "most qualified" is required. In this sense, there would be no connection with the job itself. Rather, the connection would either be to an individual's need for the job or one who would correct a slight imbalance in the racial/gender/sexual-preference makeup of the company's workforce. The "most qualified" person would then be whoever would correct that imbalance and/or needed the job the most.

For example: if males slightly outnumber females within a company and the percentage of Hispanics in the company is less than the surrounding neighborhood (or industry average or larger geographic area), the "most qualified person" would be a latina. She should get the job due to being the most qualified.

So, if the former understanding of "most qualified" is used, it clearly is a microaggression. And someone should be sued. But if the latter is the context and situation of usage, it's merely a true statement.

“America is the land of opportunity.”

Obviously a microaggression or even a macroaggression. Unless you're white or lucky, it is clearly NOT the land of opportunity.

"America is a melting pot."

In generations past, this phrase conveyed the concept of assimilation, of becoming part of and welcoming this country's customs and history. While maintaining respect for and even maintaining aspects of one's mother country culture was totally acceptable, there was also a sense of embracing and becoming a part of those things that were distinctly American. It was considered a positive thing: "We are all Americans."

But that is no longer OK. We now realize that American history has been one big long colonizing enterprise, brutalizing and stealing from the rest of the world. Furthermore, it's now essential to maintain that all cultures and histories are equal and wonderful, especially one's own. How else can appropriate grievances and financial compensations for them be maintained? To assert that one should adopt this country's ideals and become an "American" flies directly in the face of these facts.

So, there's really no context nowadays that this phrase can be used and it not be a microaggression.

In fact, as we thoughtfully consider microaggressions and try to determine what is or isn't one, it may be better to simply do this: assume that every single little thing you think, say, or do is going to offend someone. So just stop thinking altogether and everything will be just fine.