Anyone Can Be a Nixon 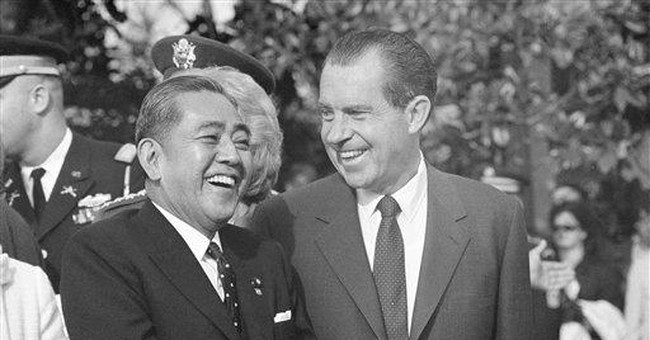 WASHINGTON -- My political friendships and sympathies are increasingly determined not by ideology but by methodology. One of the most significant divisions in American public life is not between the Democrats and the Republicans; it is between the Ugly Party and the Grown-up Party.

This distinction came to mind in the case of Washington Post blogger David Weigel, who recently resigned after the leak of messages he wrote disparaging figures he covered. Weigel is, by most accounts, a bright, hardworking young man whose private communications should have been kept private. But the tone of the e-mails he posted on a liberal listserv is instructive. When Rush Limbaugh went to the hospital with chest pain, Weigel said, "I hope he fails." Matt Drudge is an "amoral shut-in" who should "set himself on fire." Opponents are referred to as "ratf---ers" and "f---ing moronic."

This type of discourse is an odd combination between the snideness of the cool, mean kids in high school and the pettiness of Richard Nixon rambling on his tapes. Weigel did not intend his words to be public. But they display the defining characteristic of ugly politics -- the dehumanization of political opponents.

Unlike Weigel, most members of the Ugly Party -- liberal and conservative -- have little interest in hiding their views. "My only regret with Timothy McVeigh," Ann Coulter once said, "is he did not go to The New York Times building." Radio host Mike Malloy suggested that Glenn Beck "do the honorable thing and blow his brains out." Conservatives carry signs at Obama rallies: "We Came Unarmed (This Time)." Liberals carried signs at Bush rallies: "Save Mother Earth, Kill Bush." Says John Avlon, author of "Wingnuts: How the Lunatic Fringe is Hijacking America, "If you only take offense when the president of your party is compared to Hitler, then you're part of the problem."

The rhetoric of the Ugly Party shares some common themes: urging the death or sexual humiliation of opponents or comparing a political enemy to vermin or diseases. It is not merely an adolescent form of political discourse; it encourages a certain political philosophy -- a belief that rivals are somehow less than human, which undermines the idea of equality and the possibility of common purposes.

Such sentiments have always existed. But the unfiltered media -- particularly the Internet -- have provided both stage and spotlight. Now everyone can be Richard Nixon, threatening opponents and composing enemies lists.

But the Internet is also a permanent record, as Weigel found. His reaction to exposure was honest and admirable. He admitted to being "cocky" and "needlessly mean" -- the kind of introspection that promises future contribution. But when members of the Ugly Party are exposed, generally they respond differently. Obscenity? The real obscenity is an unjust war, or imposing socialism, or devotion to Israel. It is an argument that makes any deep policy disagreement an excuse for verbal violence. Or an offense against taste and judgment is dismissed as humor and satire. Before he came to The Washington Post, blogger Ezra Klein wrote on Twitter, "F--- Tim Russert. F--- him with a spiky acid-tipped d---." Klein said it had been an "inside joke." It is difficult to imagine the seedy, derelict fun fair in which such as statement would be a joke.

The alternative to the Ugly Party is the Grown-up Party -- less edgy and less hip. It is sometimes depicted on the left and on the right as an all-powerful media establishment, stifling creativity, freedom and dissent. The Grown-up Party, in my experience, is more like a seminar at the Aspen Institute -- presentation by David Broder, responses from E.J. Dionne and David Brooks -- on the electoral implications of the energy debate. I am more comfortable in this party for a few reasons: because it is more responsible, more reliable and less likely to wish its opponents would die.

Many of the entrepreneurs of the new media, on left and right, are talented, vivid and entertaining. Many are also squandering important things they do not value. They are making politics an unpleasant chore, practiced mainly by the vicious and angry, and are feeding dangerous resentments in a volatile time.

Eventually, all edginess becomes old. Obscenity reaches the limits of language. People read yesterday's hot blogger, watch yesterday's cable star, roll their eyes, and say, "Not again." And maybe then the Grown-up Party will prove more enduring and interesting after all.