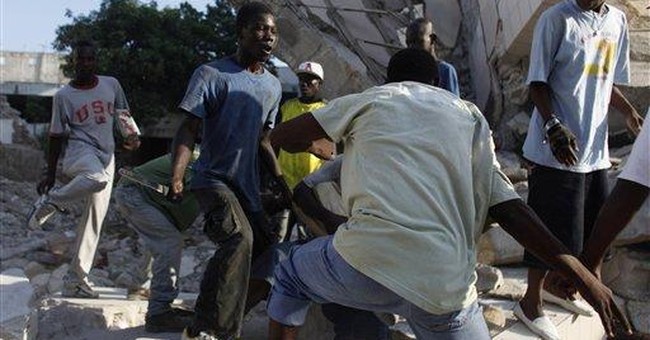 CARREFOUR, Haiti -- A helicopter flight low over Port-au-Prince reveals whole neighborhoods of flat, collapsed roofs next to areas that seem barely touched. The earthquake gods are not only cruel but arbitrary. The Presidential Palace leans drunkenly. Soccer fields and other open spaces are carpeted with tarp tents, offering scant protection as the rainy season arrives.

The pilot navigates toward a white lighthouse along the coast, between the earthquake epicenter at Leogane and Port-au-Prince. On the site of a collapsed amphitheater and park, the 3rd Battalion, 2nd Marines has established a camp in the city of Carrefour -- a scene of beach and barbed wire, aqua sea and warships on the horizon, camouflage tents, milling Marines and chopper noise.

Carrefour is the fourth area these Marines have helped stabilize since the quake. Initially the greatest needs were order, food and medical treatment. Order came more quickly than the Marines expected. Haitians didn't require a show of force, just the knowledge that someone was in charge. With the port in ruins, supplies were delivered on four beaches by landing craft. Long-range heavy lift -- the ability to move masses of equipment, supplies and people across the world -- is a demonstration of American global influence. It may be the best definition of that influence.

But Marine operations in Haiti have reached another stage. As I arrived at Carrefour, a Marine officer in charge of civilian relations was convening the first meeting of community activists, nongovernmental organizations and local officials -- a group that will gather every day to assess the needs of eight sectors of the city. The officer explained to me the complex Haitian class dynamics that determine local leadership. American Marines of Haitian background were speaking a rapid Creole -- one of the benefits of a multicultural military. The goal was to begin handing out food through community institutions instead of distribution sites or coupons, so Haitians could begin taking ownership of the effort. The Marines are practicing a kind of noninvasive surgery -- providing structure and security, but cultivating community institutions that must continue to stand after America leaves.

Where in the world did U.S. Marines learn this kind of cultural sensitivity? Lt. Col. Rob Fulford, in charge of the Carrefour operation, answers: "In Iraq and Afghanistan, where the equivalent was dealing with tribal sheiks. ... There is a maturity level inside our Marines that didn't exist in 2003 when we invaded Iraq. A cultural awareness. An ability to leverage relationships."

Another officer on Fulford's staff adds: "It is very similar to Iraq and Afghanistan, except that here there is no bad guy. We're helping the populace, winning their trust. This is right up our alley. All of us are products of the COIN manual."

He is referring to the counterinsurgency field manual authored by Gen. David Petraeus, which involved a dramatic shift in military thinking -- increasing the focus on population security, cultivating indigenous capabilities and isolating the enemy by improving the lives of the locals. This strategy helped save the American mission in Iraq. Its reach and benefits can now be seen on a Haitian beach.

Major military deployments such as Haiti involve a paradox. They put a tremendous strain on military equipment. Traveling from ship to ship off Haiti's shore, I was told of clean water condensers that had broken down, of scavenging for essential parts, of preventive maintenance postponed.

But the people of the military gain skill and experience -- moving supplies, treating trauma cases, dealing with complex cultural challenges. Despite many hardships, those who train for a mission love performing their mission.

No empire of history could boast such tenderhearted legions. The crew of the USS Fort McHenry managed to secure tens of thousands of jars of peanut butter to distribute at schools onshore. On the USS Bataan, a 96-year-old Haitian woman in intensive care is attended like an admiral. The Bataan crew is particularly proud of the Haitian baby they helped deliver aboard. Lacking a proper incubator, they improvised -- using a heat lamp normally employed to cure fiberglass.

These soldiers, sailors, airmen and Marines know that much was broken in Haiti even before the quake, and much will remain broken after they leave. But back on the beach at Carrefour, the Marines are packing up and moving one of their facilities. A group of Haitian-American investors wants to begin building on the site. These Marines, at least, know that their presence was a preface to better things.