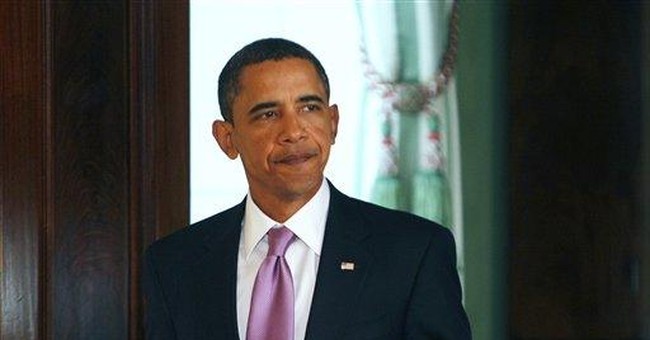 WASHINGTON -- Along with President Obama's declining public standing has come a declining rhetorical reputation. There is, of course, a relationship between the two. Even Ronald Reagan seemed a less-than-great communicator after the 1981-82 recession, with his job approval in the 30s. And few would be criticizing Obama's speeches if unemployment now stood at 6 percent. Success is the best eloquence.

But Obama's rhetorical challenge runs deeper than the recession. In the most unexpected development of his presidency, what was once universally recognized as Obama's greatest political strength -- his oratory -- now seems a serious weakness.

The swift rise of Barack Obama was primarily a literary phenomenon. His accomplishments did not come on the Senate floor; they came at Barnes & Noble. His two autobiographies, along with his 2004 speech at the Democratic convention, raised expectations of a rhetorical golden age. One early profile in New York magazine referred to Obama as "our national oratorical superhero -- a honey-tongued Frankenfusion of Lincoln, Gandhi, Cicero, Jesus and all our most cherished national acronyms (MLK, JFK, RFK, FDR)."

But Obama went from this exaggerated expectation to his current workmanlike utterances on health care and Afghanistan without an intervening period of remarkable eloquence. His acceptance speech was flat and typical. His inauguration was an extraordinarily historic moment -- which went uncelebrated by a comparably historic utterance. Obama's speeches to Congress and the American people have generally been explanatory rather than inspirational. His demeanor at West Point -- in a speech arguing for new sacrifices in the Afghanistan War -- was so stone-cold sober that one was left longing for happy hour.

Nothing has been more damning than the praise of Obama's defenders. James Fallows of the Atlantic says, "I'm not saying that his big set-piece speeches are cliche-free. ... Often they're not even that 'well written,' in a fancy-phrasemaking sense." And further: "Indeed, I can hardly remember any phrase or sentence from any speech Obama has ever given." Obama does not need "fine language" or "rhetorical polish" because he has the "eloquence that comes from original thought." Another defender has praised Obama's avoidance of "gratuitous bids for Bartlett's." Another concludes, "Maybe we don't need an inspiring president right now."

Unasked is the question: Why can't original thought and intellectual seriousness also be expressed in speeches that are well written, cliche-free, polished, inspiring and memorable?

There are passages from Obama speeches that embody all these things -- parts of his Nobel Prize speech come to mind. But they mainly serve as reminders of what is too often missing. Even Obama's well-constructed lectures -- such as his Philadelphia race speech, or his Cairo remarks -- are marred by a transparent rhetorical ploy. In Obama's running seminar, a flawed thesis and a flawed antithesis are always resolved by the synthesis of Obama himself -- the speaker as Hegelian culmination of history. In this way, Obama manages to be both academic and arrogant. Instead of exploring the genuinely historic nature of his time, he veers toward messianism. His arrival is "the moment when the rise of the oceans began to slow and our planet began to heal."

But Obama's largest rhetorical failure has come at times of crisis -- when a president's words matter most, and the time to craft them is most limited. His reactions to the Fort Hood murders and the Christmas Day attack were oddly disconnected from the emotions of the country he represents. His speech at Fort Hood was strong on paper but delivered with all the passion of remarks to the Chamber of Commerce. His recent White House speech on the terrorist threat was bureaucratic and bloodless. Both grief and resolve seem beyond his rhetorical range. People once thought Obama could sound eloquent reading the phone book. Now, whatever the topic, it often sounds as though he is.

His defenders, once again, elevate this into a virtue. He is an emotionally disciplined grown-up. But at least since Reagan, the rhetorical expectations of an American president have included not only mental toughness but empathy -- the ability to wear the nation's emotions on his sleeve. People want their president to be both the father and the mother of his country -- a talent shared by politicians as diverse as Bill Clinton and George W. Bush (whose speeches I once helped write).

Obama's model, instead, is the coolness of Coolidge. It is old-fashioned. It may even be admirable. It is hard to call it effective. With every speech, a realization grows: A president lacking in drama may also be lacking in inspiration.