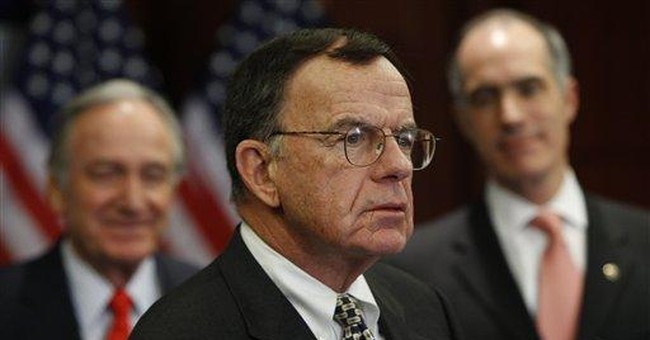 WASHINGTON -- It is symbolic of the Senate's health care bill that the section titled "No lifetime or annual limits" would allow insurance companies to impose annual dollar limits on medical care -- meaning that patients in need of expensive cancer treatment, for example, could still be bankrupted.

Democratic health reform legislation promises everything to everyone -- while imposing a series of hidden burdens to make a massive new entitlement affordable, at least on paper. So its authors are in a game of beat the clock -- pass the legislation before those burdens are fully disclosed to the public.

The case of annual dollar limits -- now being renegotiated after they were finally noticed -- is instructive. In the "reformed" insurance system, every plan would be a high-end plan, requiring insurance companies to cover people who are already sick and limiting the ability to charge higher premiums for those at higher risk. To avoid going out of business or dramatically increasing insurance premiums across the board, insurance companies want the ability to cap yearly benefits. The Senate bill included this limit, because higher insurance premiums would require greater government subsidies to help people afford them. Cutting off cancer patients helps Congress meet its budget target.

The entire Democratic health reform effort is now foundering, as its deep bow enters the shallow channel of fiscal reality. And that splash you hear is various groups thrown from the ship to lighten the load. Instead of beginning with affordable, realistic objectives, President Obama and the Democratic Congress set the goal of guaranteed, comprehensive coverage for everyone. This requires a lot more money in the system, which must come from somewhere. Actually, from someone.

One source is the young and healthy who currently take the risk of living without insurance. They would be legally mandated to pay premiums each month. According to the polls, it doesn't bother young people much that they would be forced to subsidize the insurance costs of middle-aged Americans with pre-existing health conditions. We are grateful for young people's indifference.

Another target is older people on Medicare. Health reform that doesn't "add a dime to the deficit" assumes large reductions in government payments to doctors and other health care providers. Last week, the Centers for Medicare and Medicaid Services issued a devastating report, saying these cuts "may be unrealistic" because they would threaten the fiscal stability of the Medicare system. One in five hospitals, nursing homes and home health providers could be pushed into the red. Many would stop participating in Medicare, restricting access for seniors.

It is an extraordinary political development that Democrats are willing to put Medicare -- a program that already faces serious fiscal challenges -- at further risk to pay for a new health entitlement. Or maybe they know the risk is minimal, because Congress will eventually abandon this pretense, restore the Medicare cuts and fund health reform with deficit spending.

Whatever the outcome, promises of greater efficiency in delivering health care seem empty. "In 10 years' time," says James Capretta of the conservative Ethics and Public Policy Center, "even if all of these ideas are fully implemented, the Medicare program would look and operate largely as it does today, which is to say as a fee-for-service insurance model that rewards volume and fragmentation, not integration."

The final source of funding is taxpayers. In an assault on the wrinkly, the Senate bill includes a 5 percent tax on cosmetic surgery. A larger revenue source is a tax on high-end "Cadillac health plans." It is a problem, however, that many Cadillac plans are owned by people who build Chevys and Fords. Over the years, unions have often taken generous benefits packages in lieu of salary increases. If the Senate approach becomes law, that will have been a poor calculation.

How long before the young and the old, union workers and the millions in desperate need of Botox realize that the health care free lunch is to be provided at their expense? This may already be happening, with some polls now showing opposition to reform more than 20 points higher than support.

But perhaps the largest reason for this decline is the impression that all these deceptive burdens, risky moves, budget tricks, tax increases and new bureaucracies have been thrown together to meet a political deadline, with little clear idea of how they would affect the health of the nation. Sometimes brain surgery is necessary, but this one is being conducted by moonlight with pruning sheers and chicken wire.