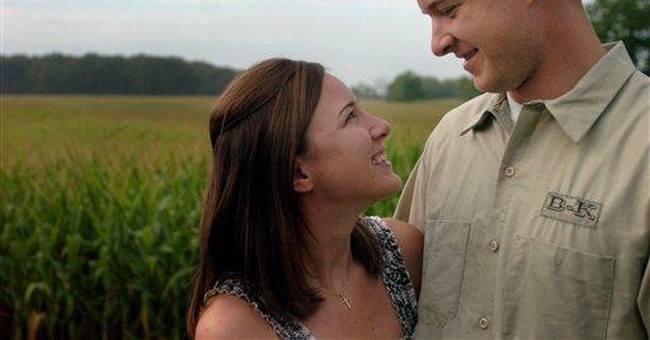 WASHINGTON -- There is a segment of society for whom traditional family values are increasingly irrelevant, and for whom spring-break sexual liberationism is increasingly costly: men and women in their 20s.

This is the period of life in which society's most important social commitments take shape -- commitments that produce stability, happiness and children. But the facts of life for twentysomethings are challenging. Puberty -- mainly because of improved health -- comes steadily sooner. Sexual activity kicks off earlier. But the average age at which people marry has grown later; it is now about 26 for females, 28 for males.

This opens a hormone-filled gap -- a decade and more of likely sexual activity before marriage. And for those in that gap, there is little helpful guidance from the broader culture. Brad Wilcox, director of the National Marriage Project at the University of Virginia, argues that the "courtship narrative" in the past was clear: dating, engagement, marriage, children. This narrative has been disrupted without being replaced, leaving many twentysomethings in a "relational wasteland."

The casual sex promoted in advertising and entertainment often leads, in the real world of fragile hearts and STDs, to emotional and physical wreckage. But it doesn't seem realistic to expect most men and women to delay sex until marriage at 26 or 28. Such virtue is both admirable and possible -- but it can hardly be a general social expectation. So religious institutions, for example, often avoid this thorny topic, content to live with silence, hypocrisy and active singles groups.

In the absence of a courtship narrative, young people have evolved a casual, ad hoc version of their own: cohabitation. From 1960 to 2007, the number of Americans cohabiting increased fourteenfold. For some, it is a test drive for marriage. For others, it is an easier, low-commitment alternative to marriage. About 40 percent of children will now spend some of their childhood in a cohabiting union.

How is this working out? Not very well. Relationships defined by lower levels of commitment are, not unexpectedly, more likely to break up. Three-quarters of children born to cohabiting parents will see their parents split up by the time they turn 16, compared to about one-third of children born to married parents.

So apart from the council of cold showers or "let the good times roll," is there any good advice for those traversing the relational wilderness? Religion and morality contribute ideals of character. But social science also indicates some rough, practical wisdom.

First, while it may not be realistic to maintain the connection between marriage and sex, it remains essential to maintain the connection between marriage and childbearing. Marriage is the most effective institution to bind two parents for a long period in the common enterprise of raising a child -- particularly encouraging fathers to invest time and attention in the lives of their children. And the fatherless are some of the most disadvantaged, betrayed people in our society, prone to delinquency, poverty and academic failure. Cohabitation is no place for children.

Second, the age of first marriage is important to marital survival and happiness. Teen marriage is generally a bad idea, with much higher rates of divorce. Romeo and Juliet were, in fact, young fools. Later marriage has been one of the reasons for declining national divorce rates. But this does not mean the later the better. Divorce rates trend downward until leveling off in the early 20s. But people who marry after 27 tend to have less happy marriages -- perhaps because partners are set in their ways or have unrealistically high standards. The marital sweet spot seems to be in the early to mid 20s.

Third, having a series of low-commitment relationships does not bode well for later marital commitment. Some of this expresses pre-existing traits -- people who already have a "nontraditional" view of commitment are less likely to be committed in marriage. But there is also evidence, according to Wilcox, that multiple failed relationships can "poison one's view of the opposite sex." Serial cohabitation trains people for divorce. In contrast, cohabitation among people who are engaged seems to have no adverse effect on eventual marriage.

There is little use in preaching against a hurricane of social change. But the delay of marriage creates moral, emotional and practical complications. The challenge, as always, is to humanize change. The answer, even in the relational wasteland, is responsibility, commitment and sacrifice for the sake of children.