Obama, Health Care and the Limits of Charm 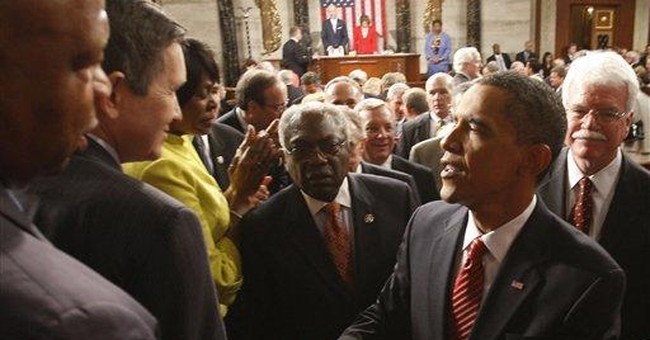 Trending
WASHINGTON -- In 1950, Lionel Trilling could write, "In the United States at this time liberalism is not only the dominant but even the sole intellectual tradition." In 1980, as the Reagan revolution was starting, Sen. Daniel Patrick Moynihan concluded, "Of a sudden, the GOP has become the party of ideas."

Where now is the intellectual center of gravity -- the thrill of innovation, the ideological momentum -- in American politics? Not in the party of Obama.

This failure of imagination was on full display during Barack Obama's address to Congress. In a moment that demanded new policy to cut an ideological knot, or at least new arguments to restart the public debate, Obama saw fit to provide neither. His health speech turned out to be an environmental speech, devoted mainly to recycling. On every important element of his health proposal, he chose to double down and attack the motives of opponents. (Obama was the other public official who talked of a "lie" that evening.) Concerns about controlling health costs, the indirect promotion of abortion and the effect of a new entitlement on future deficits were dismissed but not answered. On health care, Obama takes his progressivism pure and simplistic.

The emotional core of the speech was a closing request to win one for Ted Kennedy -- an appeal that seemed designed to rally Democrats rather than unite Americans. And that clearly is now the goal. Eke out 60 Senate votes for passage, or perhaps 50 using the riding crop of "reconciliation." Victory without concession (except, maybe, on the already doomed public option). Victory without consensus.

This is the most consistent disappointment of Obama's young term. Given a historic opportunity to occupy the political center, to blur ideological lines, to reset the partisan debate through unexpected innovation, Obama has taken the most tired, most predictable agenda in American politics -- the agenda of congressional liberalism -- and made it his own. Elected on the promise to transcend old arguments of left and right, Obama has systematically reinforced them on domestic issues. A pork-laden stimulus. A highly centralized health reform. Eight months into Obama's term, American politics is covered in the cobwebs of past controversies. Obama has supporters, but he has ceased trying for converts.

This should surprise no one. Obama did not rise on Bill Clinton's political path -- the path of a New Democrat, forced to win and govern in a red state. Obama was a conventional, congressional liberal in every way -- except in his extraordinary abilities. His great talent was talent itself, not ideological innovation. And given the general Republican collapse of 2006 to 2008 -- rooted in the initial unraveling of Iraq, the corruption of the Republican congressional majority and the financial meltdown -- Obama did not need innovation to win. Only ability and the proper tone.

But Obama's decisive political victory did not involve a decisive ideological shift in the country. Even near the height of Obama's popularity, in April, 55 percent of Americans in a Gallup poll said that big government was the biggest threat to the economy versus 32 percent who said big business. A center-right nation elected a conventionally liberal president. The current health debate is the result. Obama, once again, relies on his political virtuosity to prevail. But he lacks the ideological tools to win unexpected allies and poach support in the middle. His main argument remains: "I won." That may be enough to muscle through a comprehensive health reform bill (though I doubt Obama has changed the challenging political dynamic in Congress). It is not enough to realign American politics or change its tone.

Some Republicans are likely to draw the wrong lesson from the past few months -- that somehow their shrillness, incivility and conspiracy theories have been responsible for Obama's fall to earth, rather than Obama's overreach. This is a political miscalculation equal to Obama's own. With some exceptions among governors, the modern GOP can hardly be called intellectually ascendant. Some Republican forms of populism -- pitting the heartland against the coasts and the "real" America against the elites -- involve hostility to the very idea of ideas. But it will be wonks, not firebrands, who can exploit Obama's main weakness -- his lack of policy creativity.