Ginsburg and the Surplus Population 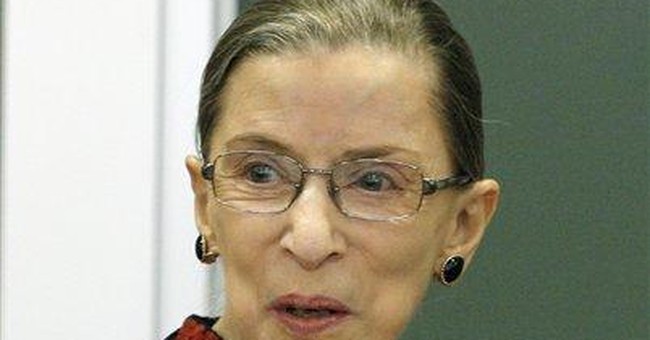 WASHINGTON -- There was a scandal this week concerning the Supreme Court, though it didn't concern the nomination of its newest member. The New York Times Magazine printed a candid interview with Justice Ruth Bader Ginsburg, including this portion: Q: "Are you talking about the distances women have to travel because in parts of the country, abortion is essentially unavailable, because there are so few doctors and clinics that do the procedure? And also, the lack of Medicaid abortions for poor women?"

Justice Ginsburg: "Yes, the ruling about that surprised me. (Harris v. McRae -- in 1980 the court upheld the Hyde Amendment, which forbids the use of Medicaid for abortions.) Frankly I had thought that at the time Roe was decided, there was concern about population growth and particularly growth in populations that we don't want to have too many of. So that Roe was going to be then set up for Medicaid funding of abortion." A statement like this should not be taken out of context. The context surrounding this passage is a simplistic, pro-choice rant. Abortion, in Ginsburg's view, is an essential part of sexual equality, thus ending all ethical debate. "There will never be a woman of means without choice anymore. That just seems to be so obvious," she explains. "So we have a policy that affects only poor women, and it can never be otherwise, and I don't know why this hasn't been said more often." Of pro-lifers, she declares, "They're fighting a losing battle" -- which must come as discouraging news to litigants in future abortion cases that come before the high court. Given this context, can it be argued that Ginsburg -- referring to "populations that we don't want to have too many of" -- was merely summarizing the views of others and describing the attitudes of the country when Roe was decided? It can be argued -- but it is not bloody likely. Who, in Ginsburg's statement, is the "we"? And who, in 1973, was arguing for the eugenic purposes of abortion? It is more likely that Ginsburg is describing the attitude of some of her own social class -- that abortion is economically important to a "woman of means" and useful in reducing the number of social undesirables. Neither judge nor journalist apparently found this attitude exceptional; there was no follow-up question. At the very least, Ginsburg displays a disturbing insensitivity to Supreme Court history. It was Justice Oliver Wendell Holmes Jr. who wrote the 1927 decision approving forced sterilization for Carrie Buck -- a 17-year-old single mother judged to be feebleminded and morally delinquent. "It is better for all the world," ruled Holmes, "if instead of waiting to execute degenerate offspring for crime, or to let them starve for their imbecility, society can prevent those who are manifestly unfit from continuing their kind." Such elitism has been discredited; it is not extinct. The entire Ginsburg interview is a reminder of the risks of lifetime appointments to the Supreme Court. Immune from criticism, surrounded by plump cushions of deference, the temperament of a justice can become exaggerated over time. For Ginsburg, complex arguments are now "so obvious" and "can never be otherwise" -- and opposition is fated to failure. Such statements, made during Ginsburg's own nomination hearing, would have been disqualifying. Now she doesn't give a damn. Her timing, however, is instructive. Ginsburg made her remarks as Sonia Sotomayor is emphasizing her poor and minority roots. In the past, Sotomayor has argued that her background as a Latina brings special insight and empathy -- a humanizing, bottom-up perspective on life and law. This is true in life, where her Puerto Rican experience offers many lessons. It should not be true in applying the law, where the goal is objectivity -- as Sotomayor herself has now backtracked to acknowledge. But there is another view of the disadvantaged found on the left (and not only on the left). Instead of especially valuing the experience of the disadvantaged, some hope that public policy can thin their ranks. This is no longer pursued through the eugenic decrees that Holmes admired, but through the advocacy of Medicaid abortions. It is estimated that the Hyde Amendment limiting Medicaid abortions has saved 1 million lives since its passage in 1976 -- some, no doubt, became criminals, and some, perhaps, lawyers and judges. It is a defining question for modern liberalism: Are these men and women "populations that we don't want to have too many of," or are they citizens worthy of justice and capable of contribution? Michael Gerson's e-mail address is mgerson(at)globalengage.org. (c) 2009, Washington Post Writers Group