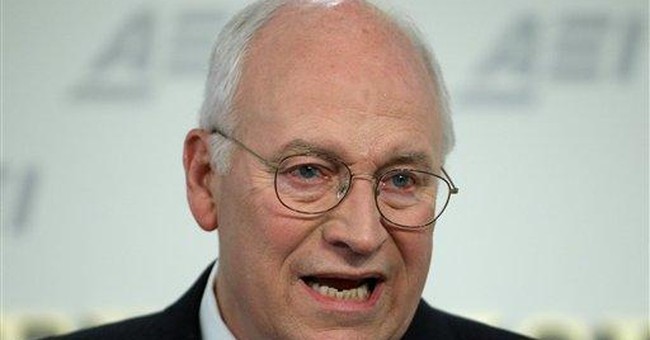 WASHINGTON -- Last week's explosive Cheney-Obama rhetorical showdown ended in a damp fizzle of substantive agreement about the continuation of military commissions, about the need for indefinite detention of some terrorists and about the three-ring foolishness of a "truth commission." The sharpest dispute, it turned out, concerned interrogation practices discontinued six years ago. Meanwhile, President Obama continues the targeted killings of terrorists by drones in Pakistan and the rendition of terrorists to friends less punctilious in their application of the Geneva Conventions. It is hypocrisy -- but hypocrisy in the national interest.

On another front in former Vice President Richard Cheney's media offensive -- this one against former Secretary of State Colin Powell on the future of the Republican Party -- the argument is just heating up. "I didn't know he was still a Republican," observed Cheney, at his most terse and acerbic. Powell dismissed the comment as "misinformed," before criticizing the Republican Party as "very, very narrow."

In some ways, these two figures are strange representatives of the ideological poles of Republicanism. While Cheney's House voting record was broadly conservative, he was admired widely by Republican moderates for his reasonable tone. He has always been reticent on controversial social issues -- except in his vocal support of gay marriage. Powell, in contrast, was one of the main authors of the military's "don't ask, don't tell" policy on homosexuality. And Powell and his wife Alma both have been praised (deservedly) by conservatives for their commitments to the mentoring and moral education of youth.

But Cheney has a point about the questionable strength of Powell's partisan attachments -- an uncertainty Powell himself has cultivated. In 1995, Powell pronounced himself unable "to find a perfect fit in either of the two existing parties" and floated the idea of running for president as an independent. Even after embracing his inner Republicanism, Powell has seldom criticized the Democratic Party with the same relish he brings to denouncing Republican excess. And Powell's endorsement of Obama against John McCain can hardly be interpreted as a protest against Republican extremism. McCain was (and is) a traditional foil of conservatives on issues such as immigration, the environment and campaign finance reform. If Powell couldn't support McCain against Obama, it is hard to think what Republican would have sufficed.

In spite of all this, it is Powell to whom Republicans should be listening. A party more focused on excommunication than proselytization is in trouble. And Powell is calling attention to some unavoidable truths.

First, it is a myth that a single, conservative message can win everywhere in America. There is no "pure" ideological approach, liberal or conservative, that can consistently carry both Alabama and Oregon. Even at the height of the Reagan Revolution, the Republican Senate included moderate and liberal voices such as Mark Hatfield and Robert Packwood of Oregon, Charles Mathias of Maryland, Robert Stafford of Vermont and Charles Percy of Illinois. A political party that appeals across a diverse, continental nation will be a diverse, ideological coalition.

Second, Powell is correct that the next, successful Republican leader must include an element of nontraditional appeal. Powell cites as his ideal the recently deceased Jack Kemp, who "was as conservative as anybody" but who "believed in inclusiveness, reaching out" to minorities and the poor.

Obama's party has assembled its current majority among groups of growing demographic (and thus democratic) influence -- particularly nonwhites, the young and college-educated voters. It is difficult to imagine Republicans regaining momentum in these groups without an aggressive, unexpected message of social justice, inclusion, environmental stewardship and social mobility -- in addition to the economic and moral conservatism that will motivate much of the Republican coalition for the foreseeable future.

During the Clinton years, conservatives were casting around for this sort of nontraditional candidate and some were ready to turn to ... Colin Powell. My colleague Bill Kristol said he was "open to the argument that the interests of conservative realignment could be furthered by the landslide victory of a moderate Republican." William Bennett urged Republicans to take a "very serious look" at Powell. Bennett observed: "There are some in our party saying, 'No, we shouldn't.' Which seems to me to be crazy. ... There is a very serious move to sort of purge the ranks of people who aren't quite pure enough. ... For God's sake, a man like this should be welcomed with open arms into this party."

Since then, Powell has not proved to be the most loyal of Republicans, but this argument remains valid.