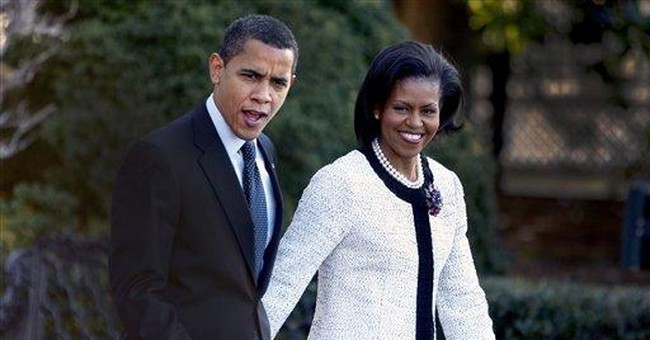 WASHINGTON -- Some friends who are loyal alumni of Notre Dame are distressed that God's alma mater is hosting a pro-choice president at commencement. For decades, they argue, Notre Dame has accommodated, legitimated and enabled pro-choice views, compromising its identity as a Catholic institution. They question the wisdom of the Obama invitation, which they believe adds to that confusion.

But some critics go further, calling President Obama's appearance "an outrage and a scandal." And that goes too far.

The office of the president has meaning and importance that transcend the views of its current occupant. Though elected by a part of America, the president becomes a symbol of its whole. The respect we accord him does not imply agreement or endorsement. It reflects our appreciation for constitutional processes. So a presidential visit is always an honor. The televised arrival of Air Force One, the motorcade, the playing of "Hail to the Chief," the audience standing as the president enters -- all these express a proper respect for democratic legitimacy.

But the controversy surrounding the Notre Dame invitation highlights growing strains in an important political relationship. In the last election, while evangelical Christians generally remained loyal to the Republican nominee, Catholics decisively shifted their votes toward Obama. In 2004, George W. Bush won the Catholic vote by five points. Obama carried it by nine points in 2008. A number of Catholic thinkers set out a "pro-life, pro-Obama" position -- disagreeing with Obama's pro-choice views but trusting in his moderate instincts and conciliatory temperament.

So far, Obama has done little to justify this faith. His initial actions on life issues -- funding overseas abortion providers, removing restrictions from federally funded medical experimentation on human embryos, revisiting conscience protections for pro-life health care professionals -- have ranged from conventional to radical. And this may be one reason why Obama's support among Catholics has eroded. According to the Pew Research Center, the percentage of Americans who disapprove of Obama's job performance increased by nine points from February to March. Among Catholics as a whole, his disapproval rating jumped 14 points. And among white, non-Hispanic Catholics, the figure doubled -- from 20 percent to 41 percent.

Catholics are having second thoughts, but it could get much worse. If the president and Congress are not careful on several issues, these concerns could open a major rift between the Catholic Church and the Democratic Party.

First, Obama has raised deep concerns among Catholic leaders by signaling he will overturn Bush's executive order protecting health workers from firing and discrimination if they refuse to perform actions they consider morally objectionable. The administration claims the order was overbroad and unnecessary. But Catholic hospitals believe these protections are essential, because of pressure by states and private medical associations for Catholic health care providers to perform or refer for abortions. Catholic leaders want the president to be helpful, not neutral or hostile, in the protection of conscience.

Second, Catholic leaders fear that the Hyde Amendment -- which bans the use of Medicaid funds for abortion except in the rarest of cases -- could easily be reversed by the pro-choice congressional majority.

Third, health care reform will raise the largest debate -- whether abortion should be a covered service. As a candidate, Obama said his health proposal would include "reproductive health services." Planned Parenthood argues that "full reproductive health" must be covered. But any proposed federal entitlement to abortion-on-demand would be unprecedented, push Catholic leaders toward revolt, and possibly doom health care reform entirely.

Americans disagree strongly about the legality of abortion. But for decades there has been a rough consensus that no one should be compelled to participate in abortions or have their federal tax dollars used for abortion. These three changes would shatter that consensus, making the destruction of life an essential part of the medical and legal order while stigmatizing and marginalizing all who object. This would be an outrage and a scandal -- a troubling reinterpretation of religious liberty, which is not merely the freedom to believe, but the freedom to bring religiously informed moral beliefs to professional and political life.

Obama's Catholic supporters would feel betrayed and discredited -- and rightly so. The Catholic hierarchy and Catholic health professionals would feel assaulted by the president -- and they would be correct. And President Obama would not need to worry about future invitations from Notre Dame.