The Deceny of George W. Bush 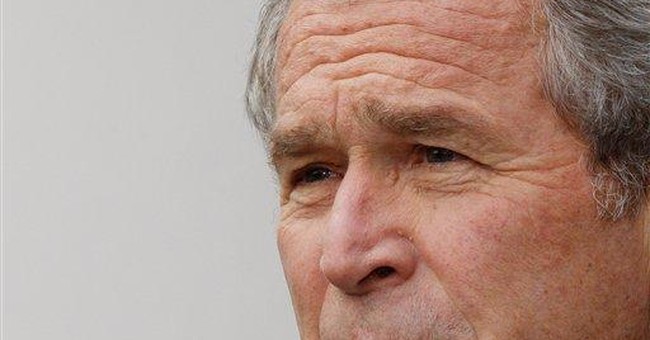 WASHINGTON -- Election Day 2008 must have been filled with rueful paradoxes for the sitting president. Iraq -- the issue that dominated George W. Bush's presidency for five and a half bitter, controversial years -- is on the verge of a miraculous peace. And yet this accomplishment did little to revive Bush's political standing -- or to prevent his party from relegating him to a silent role.

The achievement is historic. In 2006, Iraq had descended into a sectarian killing spree that only seemed likely to stop when the supply of victims was exhausted. Showing Truman-like stubbornness, Bush pushed to escalate a war that most Americans -- and some at the Pentagon -- had already mentally abandoned.

The result? A Sunni tribal revolt against their al-Qaeda oppressors, an effective campaign against Shiite militias in Baghdad and Basra, and the flight of jihadists from Iraq to less deadly battlefields. In a more stable atmosphere, Iraq's politicians have made dramatic political progress. Iraqi military and police forces have grown in size and effectiveness and now fully control 13 of Iraq's 18 provinces. And in the month before Election Day, American combat deaths matched the lowest of the entire war.

For years, critics of the Iraq War asked the mocking question: "What would victory look like?" If progress continues, it might look something like what we've seen.

But Air Force One -- normally seen swooping into battleground states for rallies during presidential elections -- was mainly parked during this campaign. President Bush appeared with John McCain in public a total of three times -- and appeared in McCain's rhetoric as a foil far more often than that.

This seems to be Bush's current fate: Even success brings no praise. And the reasons probably concern Iraq. The absence of stockpiles of weapons of mass destruction in the aftermath of the war was a massive blow. The early conduct of the Iraq occupation was terribly ineffective. And hopes that the war had turned a corner -- repeatedly raised by Iraqis voting with purple fingers and approving a constitution -- were dashed too many times, until many Americans became unwilling to believe anymore.

Initial failures in Iraq acted like a solar eclipse, blocking the light on every other achievement. But those achievements, with the eclipse finally passing, are considerable by the measure of any presidency. Because of the passage of Medicare Part D, nearly 10 million low-income seniors are receiving prescription drugs at little or no cost. No Child Left Behind education reform has helped raise the average reading scores of fourth graders to their highest level in 15 years, and narrowed the achievement gap between white and African-American children. The President's Emergency Plan for AIDS Relief has helped provide treatment for more than 1.7 million people and compassionate care for at least 2.7 million orphans and vulnerable children. And the decision to pursue the surge in Iraq will be studied as a model of presidential leadership.

These achievements, it is true, have limited constituencies to praise them. Many conservatives view Medicare, education reform and foreign assistance as heresies. Many liberals refuse to concede Bush's humanity, much less his achievements.

But that humanity is precisely what I will remember. I have seen President Bush show more loyalty than he has been given, more generosity than he has received. I have seen his buoyancy under the weight of malice and his forgiveness of faithless friends. Again and again, I have seen the natural tug of his pride swiftly overcome by a deeper decency -- a decency that is privately engaging and publicly consequential.

Before the G-8 summit in 2005, the White House senior staff overwhelmingly opposed a new initiative to fight malaria in Africa for reasons of cost and ideology -- a measure designed to save hundreds of thousands of lives, mainly of children under 5. In the crucial policy meeting, one person supported it: the president of the United States, shutting off debate with a moral certitude that others have criticized. I saw how this moral framework led him to an immediate identification with the dying African child, the Chinese dissident, the Sudanese former slave, the Burmese women's advocate. It is one reason I will never be cynical about government -- or about President Bush.

For some, this image of Bush is so detached from their own conception that it must be rejected. That is, perhaps, understandable. But it means little to me. Because I have seen the decency of George W. Bush.