Michael Brown
|
Posted: Apr 09, 2018 12:01 AM
Share   Tweet
The opinions expressed by columnists are their own and do not necessarily represent the views of Townhall.com. 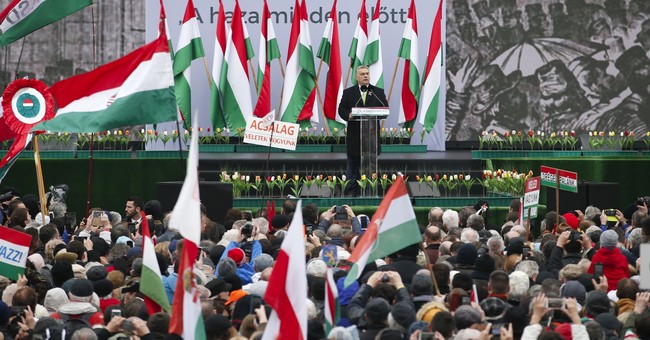 If the Huffington Post is to be believed, a bigoted Prime Minister in Hungary is leading the nation in a dangerous, ultra-right direction, to the consternation of the populace. If the election results are to be believed, a courageous Hungarian leader is standing against a sea of political correctness, with the support of the populace. I’d say in this case, the Hungarian people have a better sense of reality than does the Huffington Post.

Sunday’s elections resulted in a decisive win for Prime Minister Viktor Orban and his Fidesz party. (This will mark Orban’s third consecutive term.)

It was also a victory against Hungarian-born billionaire George Soros, who actively supported the opposition liberal (and globalist) candidates. That’s why a Breitbart headline proclaimed, “Bloody Nose for Brussels: Landslide Triumph as Anti-Globalist, Anti-Soros Orban Wins Third Term in Hungary.”

As stated in a pre-election email from Sándor Németh, pastor of the largest Protestant congregation in Europe, “The Hungarian-born George Soros is trying to influence this election on the side of the liberal and globalist opposition parties - offering them huge financial support and an army of thousands of trained activists. His goal is to overthrow our Prime Minister and the governing party, which is actively protecting Christian culture and churches, our national sovereignty and the values of traditional marriage and family.”

Is it any surprise that the Huffington Post had a very different perspective on the elections?

Yes, “Orban, a right-wing populist, has been one of the most outspoken voices against resettling tens of thousands of Syrian refugees in Europe. He has used this crisis to cast himself as the legionary on the parapets, staring down the alien hordes that threaten to overwhelm European civilization.”

In Orban's own words, “I think we have a right to decide that we do not want a large number of Muslim people in our country. We do not like the consequences of having a large number of Muslim communities that we see in other countries, and I do not see any reason for anyone else to force us to create ways of living together in Hungary that we do not want to see. That is a historical experience for us.”

He also noted that, “We shouldn’t forget that the people who are coming here grew up in a different religion and represent a completely different culture. Most are not Christian, but Muslim. That is an important question, because Europe and European culture have Christian roots.”

Lest this strike you as utterly bigoted, how would a Muslim country like Saudi Arabia respond to the arrival of tens of thousands of Christian refugees who not only wanted to enjoy government benefits but also had no desire to assimilate into Saudi, Islamic culture? Do they have no right to decline such refugees?

And, given the fact that Muhammad is now the number one boy’s name in countries like England and Wales, Orban’s concerns can be understood. Not surprisingly, he has declared Christianity to be “Europe’s last hope,” a striking statement for a man who was once an atheist.

On a more pragmatic level, “His policies have been widely credited for turning Hungary’s economy around following the 2008 global market crash.”

But for Nick Robins-Early, writing one day before the elections in the Huffington Post, things looked very different. A headline announced, “Hungary’s Strange And Vicious Election Brings Fears For The Future.” Indeed, “As Viktor Orbán looks set for a third consecutive term in power, there is widespread concern about hateful rhetoric and threats to rule of law.”

The article continues: “Orbán’s leadership can seem like a far-right fever dream in which identity politics and fear of outsiders trumps everything else.”

Even George Soros is portrayed as a victim: “Last year, the government also began a billboard campaign that targeted the 86-year-old American billionaire George Soros, whose Open Society Foundations fund a range of liberal-minded projects and organizations in Eastern Europe.

“Soros, a Hungarian Jew, emigrated to the United States after World War II. A leading Jewish organization in Hungary asked Orbán to halt the campaign, saying it was a proxy for anti-Semitism ? something that the government denies.”

So, a radical, far-right, anti-Semitic government is using identity politics to rob needy refugees of a bright and hopeful future. How utterly vicious and cruel. In the words of Soros, Prime Minister Orban is “the leader of a mafia state.”

Not only so, but, “Under the guise of legal reform, Orbán has undermined Hungary’s judiciary and captured all independent state institutions, said Kim-Lane Scheppele, a professor of political science at Princeton University who previously worked at Hungary’s constitutional court.”

Worse still, Orban controls the media as well: “Today, Orbán and his allies control much of how Hungarians get their news. When dealing with dissenting voices, Orbán and his spokesman have also aggressively gone after the media at home and abroad.”

Others interviewed by the Huffpost supported these serious claims. Shades of 1984!

Pastor Németh gives us a healthier perspective of the reality on the ground: “If Orban and his party come out victorious, then, with strong government-support, the battle will continue not only against the Islamisation of our continent, but also against the hatred of Christianity, and against anti-Zionism and anti-Semitism in Europe.” (For the record, Németh is a staunch supporter of Israel and the Jewish people.)

He adds, “In the past three years, Viktor Orban has boldly stood up for the traditional values of Europe and the protection of all communities which are based on the Judeo-Christian revelation. He has also spoken up on multiple occasions for the need to revitalise these communities.”

Interestingly, “He was the only European political leader who made positive comments about Donald Trump during the American presidential election campaign.”

Is it any surprise, then, that Orban’s policies have drawn such ire from the left?

Thankfully, for the good of Hungary, it is the people of that nation, not the liberal Western media, who have the final vote.

On Sunday, they made their sentiments clear.