Michael Brown
|
Posted: Oct 17, 2017 10:00 AM
Share   Tweet
The opinions expressed by columnists are their own and do not necessarily represent the views of Townhall.com. 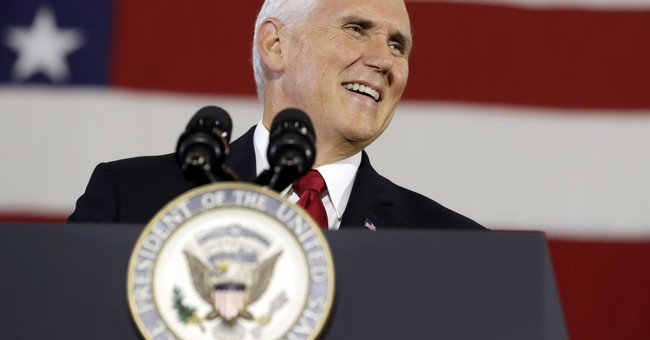 According to a Washington Post article, “In 2002, Mike Pence told The Hill that he never eats alone with a woman other than his wife and that he won't attend events featuring alcohol without her by his side, either.”

Sounds reasonable and wise to me. Nothing extreme or unusual from my point of view or in the circles in which I travel, especially if you are a powerful leader or a person of influence.

But that’s not how many on the left saw it. As I noted in April, “The left’s bizarre and almost hysterical reaction to Vice President Pence’s personal marital guidelines is not only totally off point. It actually misses the most essential point of all, namely, that it is Pence’s high esteem for women – specifically, the most important woman in his life, his own wife – that fuels his moral choices. At the same time, the leftist response reveals a glaring blind spot when it comes to self-awareness.”

Yes, the response from the left was an outright denial of human nature. The fact is that we humans can do all kinds of creepy, ugly things, things that are despicable and shameful. It’s embarrassing, but it’s true.

Vice President Pence, being aware of his humanity, knows all too well how easy it is to fall. That’s why he made it his habit to take certain precautions – in the best interests of his marriage, his own life, and the women he worked with. Again, it makes perfect sense to me.

Now, with more and more women saying, “Me too! I’ve been sexually abused,” we realize just how epidemic this problem is in our culture. In other words, it’s not just the Harvey Weinsteins who are allegedly guilty. There are many other abusers out there, from rapists who prey on strangers to adults who abuse children to bosses who abuse their employees.

And this is nothing new. It’s as old as the human race, which is why the Bible addresses sexual sin from Genesis to Revelation, exposing even some of Israel’s most famous leaders (including Samson and David and Solomon).

That’s why Paul also puts sexual sin at the top of his lists of sins of the flesh (see, for example, 1 Corinthians 6:9-10), and that’s why the Book of Proverbs (the book of wisdom par excellence) contains so many lengthy warnings about the dangers of sexual sin (see especially Proverbs 5 and 7). That’s also why Jesus warned against it so strongly (see Matthew 5:27-30).

As Paul so wisely wrote, “Therefore let anyone who thinks that he stands take heed lest he fall” (1 Cor. 10:12).

When our daughters were growing up, I would explain to them how teenaged boys would try to check them out and how lust-filled they could be. Our girls first reacted with shock and protest, thinking this was gross and impossible. “No way, Dad!” But it wasn’t long before they realized I was telling them the truth. Boys will be boys! (And all too often, in the bad sense of the word, men will be men – including dirty old men.)

Let us, then, encourage sexual purity and marital fidelity. And rather than mock the Mike Pences of this world, we should commend them.

(For more practical steps that can be taken, see the chapter, “From Playboy to Purity: Reversing the Sexual Revolution” in Saving a Sick America: A Prescription for Moral and Cultural Transformation.)