Yes, Gay Activists Are After Your Children

Michael Brown
|
Posted: Jul 07, 2017 12:01 AM
Share   Tweet
The opinions expressed by columnists are their own and do not necessarily represent the views of Townhall.com. 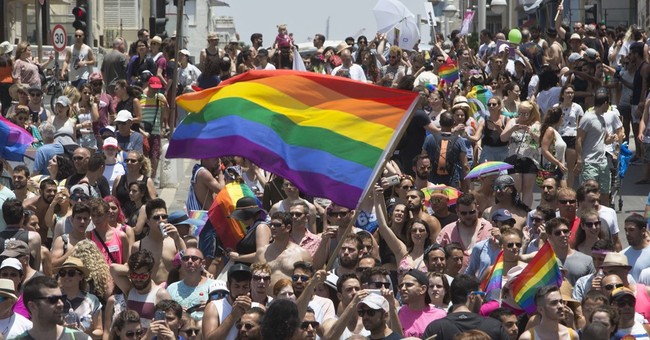 For years we have heard that the homosexual movement cannot grow by reproduction, so it must grow by seduction, especially in our schools. Gay activists have been deeply offended by that statement, and for good reason, since it makes them out to be a bunch of pedophiles and child molesters. The truth be told, there are plenty of heterosexual pedophiles and child molesters, including female teachers who have sex with underage males.

But while the “seduction instead of reproduction” statement is an ugly and unfair exaggeration, what cannot be denied is this: The homosexual movement seeks to grow by the indoctrination of our children, from toddlers to pre-schoolers, and from elementary school to college. LGBT activism thrives on indoctrination.

It is true that some gay adults actively seduce underage children, using school-based GSA’s (Gay Straight Alliances) and other means to lure them in, as groups like Mass Resistance have clearly documented. (If you don’t believe me, click on this link.)

But most of the important work is done by indoctrination. It is planned, it is systematic, and it is effective.

At a 2015 teacher’s conference in Canada, lesbian kindergarten teacher Pam Strong explained, “how she uses her classroom to convince children as young as four to accept homosexual relationships.”

She said, “With [the principal’s] encouragement, we decided that I would go from class to class and talk about what ‘gay’ means, what does ‘LGBTQ’ mean, what do ‘I’ mean.”

She also read the gay book King and King to these little ones, and when she got to the part about the two princes being “married,” one of the little boys suddenly shouted out: “They can’t do that! They can’t get married. They’re two boys.”

She explained to him that, yes, they did do it, right there on p. 12, to which the boy protested that it was just a story, not real life.

Strong replied, “It happens in real life too. I am married to a woman. I am gay. And I am in love with my wife.”

And with that, the kids were silenced. I guess being gay is OK after all!

What’s striking, though, is that this is not some isolated incident that took place in Canada. It’s happening all over America (and other nations) in hundreds (or thousands) of classrooms, and it’s been happening for many years.

For example, in England, as far back as 2006, the National Union of Teachers (NUT) stated that, “It is particularly important to begin to make three to five-year-olds aware of the range of families that exist in the UK today; families with one mum, one mum and dad, two mums, two dads, grandparents, adoptive parents, guardians etc.”

And already in 2005, Kevin Jennings, then the Executive Director of GLSEN (the Gay, Lesbian, and Straight Educational Network), noted that, in 1995, “Fewer than a hundred gay-straight alliances existed,” whereas in 2005, “Nearly 3,000 schools have GSA’s or other student clubs that deal with LGBT issues.”

Today, there are more than 900 GSA’s registered in California alone, with younger and younger kids being exposed to them. That means that your 12-year-old daughter can come out to her peers and her gay teachers at school without your knowledge. And this interaction and affirmation (and more) can go on for years, again, without your knowledge.

And let’s not forget that, for some years now, California has had mandatory LGBT history classes for all children in public schools, grades K-12, without exception and without the ability to opt out.

Talk about indoctrination. And this is entirely aside from the bombardment that comes your child’s way every day through the media and social media.

At this point, though, you might be wondering: Well, who among us didn’t know about this already? You and others have been talking about it for years. Why write yet another article on it?

It’s because of videos like this on YouTube, featuring a bearded man in drag educating kids from 3-7 about what it means to be a drag queen. (I urge you to click on the link if you haven’t and just look at the picture. This is why I speak up once again.)

It’s because more and more drag queens are reading to your kids in libraries, beginning with kids as young as two. (To call this anything less than a perversion of the highest order is to remain silent in the face of evil. And yes, I’m calling this evil.)

Just look at this picture (please, please click on the link), where the Boston Sisters of Perpetual Indulgence (drag queens again), read stories to little children sitting at their feet in a library. Since I wrote about this and spoke about this one month ago, it’s becoming more common.

Talk about indoctrination. Talk about coming out of the closet with no holds barred. Talk about having nothing to hide anymore. Yes, it’s time to put drag queens on display for toddlers!

And I write about this subject again because of an absolutely horrific situation in England, where an Orthodox Jewish school for girls 3-8 fell afoul of the government because it failed to educate the children about being transgender or lesbian.

But why should it? For heaven’s sake, this is a school for Orthodox Jewish girls. Is nothing sacred anymore?

As reported on a Christian website two weeks ago, “Vishnitz Girls’ School in north London first came under scrutiny with an unannounced emergency inspection in February 2016, after safeguarding concerns were raised. The school’s categorisation fell from ‘good’ to ‘standards not met’.”

What was the reason for the “unannounced emergency inspection”? What standards has the school not met? The report overall is very positive, pointing to the school’s many excellent qualities and the fine results it is getting. What then was the problem?

Yes, “It doesn’t matter how good your school is in all other respects –simply refusing to teach very young children about gender reassignment will lead to your closure. That is the possible outcome for not only this school, but other Jewish schools which refuse, as a matter of faith, to teach about LGBT issues.”

Sadly, I could give almost endless examples of this kind of pressure and abuse and indoctrination, and I’ve written long chapters in books on this along with scores of articles. But for those who are still living in denial, please do face the facts. For years now, LGBT activists have been coming after your children, and their strategy has been immensely successful so far.

It’s up to us as parents and educators and pastors and leaders and young people and old people to fight fire with fire, to get more involved in our schools, to get our message out, and to indoctrinate kids with the truth.

We can teach them to be loving and kind to everyone, especially those who seem different, without teaching them to affirm that which is contrary to God’s design and plan.

And whatever we do, we best do it on our knees, crying out for divine intervention. Without that, this ship has long since sailed.

Leah Barkoukis
And Now...Some Progressives Are Attacking Each Other Over COVID
Matt Vespa
Caitlyn Jenner: 'I Am All for the Wall'
Spencer Brown
Liz Cheney Keeps Making This Worse on Herself
Rebecca Downs