To the Mayor of Manchester: The Suicide Bomber Was a Muslim

Michael Brown
|
Posted: May 27, 2017 12:01 AM
Share   Tweet
The opinions expressed by columnists are their own and do not necessarily represent the views of Townhall.com. 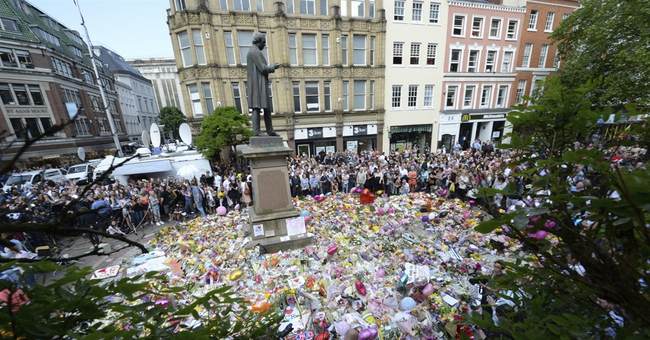 Mr. Burnham, with all respect to the pain your community is experiencing, and with full recognition of your desire to unite your people, you are terribly wrong. Dead wrong. The suicide bomber was a terrorist because of his Muslim faith. Until you acknowledge that and until the people of your community acknowledge that, you will not be able to combat the terror.

I imagine that most of the Muslims in Manchester are aghast at this atrocity. And I imagine most of them look at this as a perversion of their faith.

But many others do not. For them, this is what Islam does. It fights the unbelievers wherever it finds them, especially at a worldly concert attended by young people. Infidels!

I understand, Mr. Burnham, that your point was that Salman Abedi was not a true Muslim, since true Muslims do not commit such acts.

In that case, neither Osama bin Laden nor any members of Al-Qaeda were (or are) true Muslims.

And neither Abu Bakr al-Baghdadi, the founder of ISIS, who holds a Ph.D. in Quranic Studies from Iraq's Saddam University for Islamic Studies, nor any members of ISIS are true Muslims.

And no member of the Taliban or Hamas (which stands for the “Islamic Resistance Movement”) or Hezbollah (“The Party of Allah”) or the Muslim Brotherhood are true Muslims.

And it’s just a coincidence that during the month of Ramadan, Islamic terrorist attacks increase dramatically around the world. (The bloodshed has already begun, with more than 25 Coptic Christians, including children, slaughtered on the first day of Ramadan.)

And it’s just a coincidence that Abedi allegedly memorized the Quran as a boy and would chant his Islamic prayers loudly in the street.

And it’s just a coincidence that numerous texts in the Quran are interpreted by millions of Muslims as justification for terrorist attacks.

And it’s just a coincidence that these same texts have been used by Muslims for centuries as a theological basis for acts of violence.

And it’s just a coincidence that suicide bombings between rival Muslim groups take place on a regular basis in mosques and in markets and at funerals.

And it’s just a coincidence that the terrorists responsible for 9-11 and Fort Hood and the Boston Marathon bombing and San Bernardino and Orlando and Nice, France and Brussels, Belgium, and London, England, and Madrid, Spain, and Beslan, Russia (the list is almost endless) were all Muslims.

Focusing on England, it’s just a coincidence that BBC reports that, “Approximately 850 people from the UK have travelled to support or fight for jihadist organisations in Syria and Iraq, say the British authorities.” Need I say that all 850 were Muslims?

And Mr. Mayor, you must be aware that, “Manchester has long been a hotbed of Islamic extremism, with dozens or more Muslim-born radicals and converts known to have gone to fight for Islamic State and, security officials fear, in some cases secretly returned to continue their jihad in Britain.”

Is this just a coincidence?

Here in America, I guess it was just a coincidence that Nidal Malik Hasan, the 2009 Fort Hood shooter, calls himself a “Soldier of Allah” and was radicalized by the Islamic cleric Anwar al-Awlaki, (We killed al-Awlaki via drone attack in Yemen in 2011).

And it was just a coincidence that he shouted out “Allahu Akbar” as he wounded or killed more than 40 unarmed, American military personnel.

And it was just a coincidence that he previously turned a medical lecture into a radical Islamic screed, during which he allegedly justified suicide bombings, reportedly stating that if you didn’t believe in the Koran, “you are condemned to hell. Your head is cut off. You're set on fire. Burning oil is burned down your throat.”

Pitifully, our government classified this 2009 Islamic terrorist attack as “workplace violence.” And pitifully, many leaders in England want to disassociate the Manchester bombing from Islam.

In contrast, Egypt’s President el-Sisi, himself a devout Muslim, delivered a courageous speech at Cairo’s prestigious Al-Azhar University in 2015, stating, “We need to revolutionize our religion." He called for "religious discourse that is in keeping with its times," warning that "the Islamic nation is being torn apart and destroyed" by extremism.

In Poland, Prime Minister Beata Szydlo had some very strong words to say in response to the Manchester bombing. “Where are you headed Europe?” she asked. “Rise from your knees and from your lethargy or you will be crying over your children every day.”

She continued: “If you can’t see this – if you can’t see that terrorism currently has the potential to hurt every country in Europe, and you think that Poland should not defend itself, you are going hand in hand with those who point this weapon against Europe, against all of us.