Michael Brown
|
Posted: May 22, 2017 12:01 AM
Share   Tweet
The opinions expressed by columnists are their own and do not necessarily represent the views of Townhall.com. 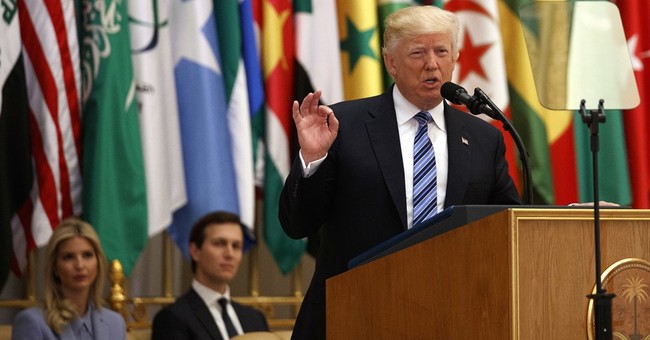 Although President Trump’s speech before 50 Muslim leaders in Saudi Arabia did not break new ground in terms of America’s Middle Eastern policy, it was highly significant for at least four reasons.

First, Trump mentioned “terror” or “terrorism” 30 times. In stark contrast, during President Obama’s (in)famous speech Cairo speech in 2009, he did not mention terrorism at all. More importantly, President Trump spoke directly of “the crisis of Islamist extremism and the Islamist terror groups it inspires.”

To fight against this, Trump urged, “means standing together against the murder of innocent Muslims, the oppression of women, the persecution of Jews, and the slaughter of Christians.”

And remember: Trump said this in the heart of Islamic holy land, Saudi Arabia.

The president called on these Muslim leaders to drive out the terrorists from “your places of worship . . . your communities . . . your holy land, and this earth.”

Yes, these terrorists are currently in some of your mosques, and you need to drive them out.

To say that, in that setting, required chutzpah.

Trump also announced the founding of “a new Global Center for Combating Extremist Ideology, located right here, in this central part of the Islamic World.

“This groundbreaking new center represents a clear declaration that Muslim-majority countries must take the lead in combatting radicalization.”

It’s about time that Muslim leaders were urged to combat this deadly ideology.

He called it “the government that gives terrorists . . . safe harbor, financial backing, and the social standing needed for recruitment.”

He labeled it “a regime that is responsible for so much instability in the region.”

He stated that, “From Lebanon to Iraq to Yemen, Iran funds, arms, and trains terrorists, militias, and other extremist groups that spread destruction and chaos across the region. For decades, Iran has fueled the fires of sectarian conflict and terror.”

He said, “It is a government that speaks openly of mass murder, vowing the destruction of Israel, death to America, and ruin for many leaders and nations in this room.”

This had to sting Iran. And this had to be unprecedented for an American president speaking in such a setting. (Note also that some of the Muslim leaders there presumably want to see Israel destroyed, yet Trump spoke of this as evil.) Elsewhere in his speech, Trump mentioned Shias and Sunnis together - so he was stating that his issue was with terrorism, not Islamic sectarianism.

Not surprisingly, in a critical article on Trump’s speech, CNN cited a professor from Iran’s Tehran University who was skeptical of the president’s outreach to the Muslim world. The professor, Hamed Mousavi, said, “It will be met with deep skepticism in the Muslim world because Trump has been hostile and offensive to Muslims -- with his Muslim travel ban, for example. All they've seen so far from Donald Trump is a lot of hostility.”

Professor Mousavi also spoke against our new arms deal with the Saudis. He did raise a legitimate point regarding our inability to combat Wahabism, the fundamentalist expression of Islam that dominates Saudi Arabia and has helped spurn radical Islamic terrorism. But his critical comments should be expected, since Saudi Arabia and Iran are arch-enemies.

CNN provided no context to Mousavi’s critique, which must now be read with a big grain of salt.

Note also that Trump never proposed a generic “Muslim travel ban” (as claimed by the professor). That was the exaggeration of a hostile media and Trump’s political opponents.

Third, the president put Hamas and Hezbollah in the same category as ISIS and Al-Qaeda. This means that opposition to Israel is not a justification for terrorism. He said, “The true toll of ISIS, Al Qaeda, Hezbollah, Hamas, and so many others, must be counted not only in the number of dead. It must also be counted in generations of vanished dreams.”

The significance of this was not missed by a Lebanese professor, who, CNN reports, “pointed out that Trump equated Hezbollah, a Lebanese political and military group made up mostly of Shia Muslims, with ISIS and al Qaeda. Hezbollah was conceived in the early 1980s primarily to fight against Israeli occupation in southern Lebanon.”

The professor, Karam Makdisi, claimed that, “This is irresponsible on many levels. With Israeli rhetoric increasing against Lebanon, this does not bode well. The Lebanese will not put much stock in yet another grand speech, but they will keep an eye out for Trump's position towards Israel's threats against Lebanon, and any shift in US policy towards Syria.”

I’m sure that Prof. Makdisi was not the only Muslim intellectual who got Trump’s point loudly and clearly. To paraphrase: “You may call Hamas and Hezbollah freedom fighters against the Israeli occupation. We call them terrorists.”

Fourth, Trump rejected the theology of martyrdom by suicide bombing, saying, “Terrorists do not worship God, they worship death.”

He said, “This is not a battle between different faiths, different sects, or different civilizations.

“This is a battle between barbaric criminals who seek to obliterate human life, and decent people of all religions who seek to protect it.

“This is a battle between Good and Evil.”

Trump also made clear that the victims of this terror are primarily Muslims. He said that “in sheer numbers, the deadliest toll has been exacted on the innocent people of Arab, Muslim and Middle Eastern nations. They have borne the brunt of the killings and the worst of the destruction in this wave of fanatical violence. Some estimates hold that more than 95 percent of the victims of terrorism are themselves Muslim.”

Somehow, another critic cited by CNN missed this emphatic statement.

Former Jordanian Justice Minister Ibrahim Aljazy said, “Referencing 'Islamic' terrorist organizations only will not be appreciated by the vast majority of people in the region when other forces are carrying out acts of aggression, especially as Arabs and Muslims are the prime victims of these organizations.”

Perhaps CNN needs to vet its Trump-critics more carefully. At the least, they should have qualified some of the quotes. But again, is anyone surprised?

Turning back to President Trump, we can certainly debate his policies, actions, and words at home. (I am not Trump’s defender-in-chief. Not anywhere near it.)

We can question the propriety of the massive arms deal with Saudi Arabia. (Will this be used to finance terror? Will it lead to more bloodshed in the region? Is this good for Israel too?)

But we should not question the landmark nature of Trump’s speech, which also referenced the oppression of women and called on these Muslim nations to lead the way in repatriating Muslim refugees.

In short, an American president stood on holy Islamic ground and called on 50 Islamic leaders to fight against Islamic terrorism. This is highly significant.