The Sickening Nature of Anti-Israel Hatred

Michael Brown
|
Posted: Jan 09, 2017 11:09 AM
Share   Tweet
The opinions expressed by columnists are their own and do not necessarily represent the views of Townhall.com. 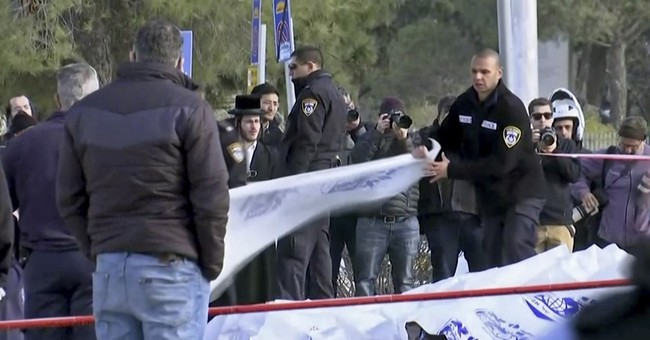 When is a cold-blooded murderer hailed as an international hero? When he's a radical Islamic terrorist who slaughters Jews. They deserve to die!

It is gut-wrenching to watch the video footage of a truck ramming into a crowd of Israelis in East Jerusalem, killing four of them and injuring at least 15 more.

Three of the victims were soldiers, all female, aged 20, 20, and 22. The fourth victim was an Israeli man, also just 20-years-old.

All of them had dreams of a bright future, a future none of them will live to see.

Israel is again in mourning.

But there is celebration in the Jew-hating, Israel-despising world. It doesn’t get any better than slaughtering Israelis – especially Israeli soldiers – in cold blood.

As for the truck driver, a religious Palestinian Muslim who was shot dead by police, his sister said “the family was ‘thankful’ for the attack and called her brother’s death ‘the most beautiful martyrdom.’”

Other Palestinian Muslims reacted similarly, as reported by Michael Qazini on the Daily Wire, noting that, “These weren’t spontaneous celebrations by a few bad actors. Praise for the terrorist came from the top of the Palestinian leadership chain, placing a rubber stamp on a Jew-hating culture of death.” (See the article for details.)

Accordingly, Hamas, representing the most extreme side of Palestinian leadership, lauded the truck attack as “heroic.” (Yes, it takes a real hero to back up a truck and run over your victims while being shot at. What courage.)

Similarly, Al Quds [Jerusalem] News posted a report, “Live from where the heroic incident took place in Occupied Jerusalem.” (See the link for more examples of Palestinian celebration, including passing out sweets in the streets.)

But this shouldn’t surprise us at all, since this is same leadership that names children’s schools after Palestinian terrorists who died in the course of their murderous acts, hailing them as martyrs. (Last October, the Palestinian Authority “dedicated a new school to the mastermind of the 1972 Munich Olympics massacre. . . .”)

And this is the same leadership that pays salaries to imprisoned Palestinian terrorists at a rate up to four-times the average Palestinian salary.

And this is the same leadership that sponsors summer camps for children where they learn the requisite skills for slaughtering Jews, also naming the camps after famous terrorists.

Over on the Iranian-run Press TV Facebook page, the hatred flowed freely, with a good number of commenters justifying the slaughter because these Israelis were in East Jerusalem, which they consider to be an illegal occupation. (Wait a minute. Didn’t the Obama administration just affirm that in the UN Security Resolution it allegedly helped craft?)

· Sow the wind, reap the storm. Occupiers have no rights, only the obligation to go back to where they came from. The Israeli regime is responsible for the deaths of its citizens in this instance. There will never be peace on stolen land.

· Palestinians have every right to self-defense. If they find IOF on their roads they must repeat this and should be encouraged.

· I wish and pray there will be repetition of this incident at much much bigger scale which will wipe out brutal israel from world map, InshaAllah [God willing].

· Good job ... because its Israel problem killing innocent Palestinians every day no one criticise why...

· Hahaha look at the IDF soldiers. Muppets. I don’t support terrorism but at least this one did not kill any innocent woman or child and went straight for their killers!

· Killing an oppressor is not being an extremist. These were occupation soldiers and were in the process of going to commit atrocities in Palestine. When the French resisted German occupation it was not called terrorism.

· It is so good to hear this News.

· Good work ever done by a true Muslim.

· The Zionists been ramming tents and makeshift shelters of innocent Palestinians for the past 70 years no problem, now that some Zionist soldiers rammed by Palestinian is good thing to happen.

I have no doubt that there are Palestinians who have been mistreated by Israeli soldiers and for that reason, harbor intense hatred against the people of Israel. As a friend of Israel, I say: Let the injustices be exposed and rectified. And certainly, many Palestinians are shocked and grieved over the death of these young people.

I also recognize that there are right-wing extremists in Israel who have engaged in terrorist acts against Palestinians (like the infamous Baruch Goldstein), and I know that some of these extremists consider Palestinians (and even all non-Jews) to be less human, even saying that the only good Arab is a dead Arab.

But this represents the extreme fringe of the extreme fringe, and if an Israeli rammed a truck into a crowd of young Palestinians, there would be national outrage in Israel (and the worldwide Jewish community), the government would immediately and unconditionally condemn the killer and look to arrest any accomplices, and there would be a sense of shame rather than glee through the country.

But when Jewish blood is shed by a radical Islamic terrorist – in particular Israeli blood, especially the blood of an Israeli soldier – then celebration erupts among Jew-haters worldwide.

Time to pass out the candy and rejoice.

This is beyond sick.