Can We Please Stop with This Nazi, Hitler, Name-Calling Stuff?

Michael Brown
|
Posted: Nov 22, 2016 10:53 AM
Share   Tweet
The opinions expressed by columnists are their own and do not necessarily represent the views of Townhall.com. 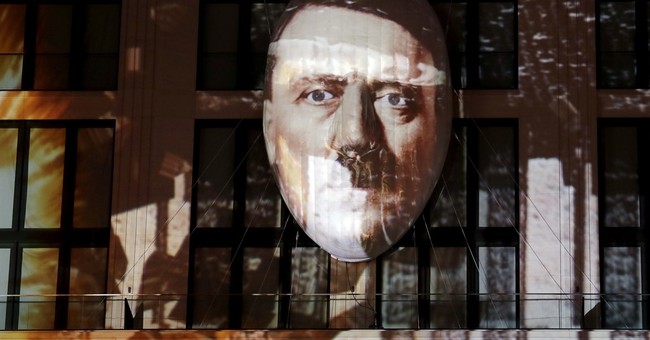 Adolph Hitler and the Nazis committed some of the most horrific acts known to the human race, systematically murdering millions of Jews – including one and a half million Jewish children and babies – along with other ethnic and social minorities, not to mention sparking a war that killed many millions of others. In light of the depths of their evil, we had better be very careful before we label others Nazis or call our opponents Hitler.

Most recently, Howard Dean labelled Steve Bannon, President-elect Trump’s Chief of Staff, a Nazi, explaining, “It's a big word and I don't usually use it unless somebody's really anti-Semitic, really misogynistic, really anti-Black.”

Earlier in the month, Louis Farrakhan, leader of the Nation of Islam, tacitly

Back in June, a headline on the Daily Kos claimed that “Jeff Sessions endorses Nazi style fascism.” (Sessions is now Trump’s nominee for the position of Attorney General.)

But this is nothing new.

In June, 2004, John Leo reported that comparing President George W. Bush to Hitler was “no longer confined to loonies,” pointing to the comments of Judge Guido Calabresi, “former dean of the Yale Law School and a moderate liberal,” who “said Bush's rise to power was strikingly similar to the rise of Hitler and Mussolini.” Leo also noted that, “Senator Robert Byrd, for example, says George Bush reminds him of Hermann Goering, thus forfeiting much of his heralded reputation for political seriousness.”

With the election of Donald Trump, a whole new wave of rhetoric has been unleashed. Typical are the comments of Frank Navarro, a Holocaust scholar who is now a high-school teacher, who stated that “there are remarkable parallels between Hitler and Donald Trump.”

On a more grassroots level, those of us in the pro-family movement are used to being called Nazis and Hitler on an almost daily basis, a proven (and effective) strategy of gay activists for more than 25 years. As someone with the screenname of Astral Haze posted on one of my web pages back in March, “all homophobic people are hitler.” (Of course, if you do not affirm any of the goals of gay activism, you are homophobic, and therefore you are Hitler.)

This horrific name-calling needs to stop, not only because it defames the living but also because it mocks the dead – specifically, the victims of Hitler and his henchmen.

Of course these days, it seems that the left is branding almost all of its political and ideological opponents as racist or sexist or misogynist or Nazi or the like (Farrakhan’s attack on Hillary Clinton is in a class of its own), and the more that White Supremacist groups celebrate Trump’s victory (despite Trump’s constant disavowal of their support), the more the radical left will say, “You see! We told you Trump was a Nazi.”

We are also reminded that Trump was elected on November 8th, one day before the 78th anniversary of Kristallnacht, the Night of Broken Glass (November 8th, 1938), the date that many historians give for the beginning of the Holocaust. As Jennifer Mendelsohn tweeted, “Waking up on the anniversary of Kristallnacht to the news that America elected a demagogue. You can't make this stuff up.”

Neither can you make up the extreme, destructive, and ugly nature of this rhetoric.

So, to set the record straight, the day that Steve Bannon or Hillary Clinton begin putting Jews (or women or blacks) on cattle cars, sending them to the gas chambers to be exterminated, is the day you can call him a Nazi and call her Hitler. (As much as I deplore the abortion policies of Hillary Clinton, I will not call her Hitler.)

And the day that Jeff Sessions begins rounding up minorities, forcing them into crowded ghettos, putting them on a starvation diets and depriving them of virtually all human rights, is the day you can accuse him of endorsing Nazi style fascism.

And the day that Donald Trump rounds up hundreds of thousands of Mexicans or Muslims or blacks or Jews, forces them to dig ditches, strip naked, and then take a bullet to the back of the head, or the day he throws the babies of these minorities into burning pits (why waste a bullet on a baby?), or the day he authorizes medical experiments to be performed on minority twins (without anesthesia), or the day he uses the carcasses of his victims to make soap and lampshades is the day you can compare him to Hitler.

Until then (and I trust God that such days will never come in our country), we would do well to watch our words.

All this Nazi-Hitler rhetoric is beyond insulting. It is downright dangerous and terribly incendiary.