The Coddled Generation That Wasn’t Taught to Grow Up

Michael Brown
|
Posted: Nov 12, 2016 12:01 AM
Share   Tweet
The opinions expressed by columnists are their own and do not necessarily represent the views of Townhall.com. 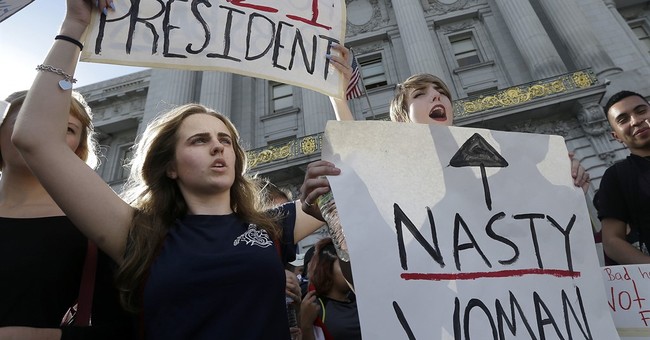 There are millions of fine young people across America today, people of character, people of principle, people of discipline, people of maturity. But there are millions of others who have been coddled all their lives, almost never taught to lose or be put in their place or take full responsibility for their actions. It is some of those young people who are protesting on the streets and being comforted by their professors as they cry on college campuses in the aftermath of the elections.

Just consider this scene from our campuses on the day after the elections, as reported by the Wall Street Journal: “At Tufts University, arts and crafts were on offer. And the University of Kansas reminded students via social media of the therapy dogs available for comfort every other Wednesday.”

And then this, from the University of Michigan: “There was a steady flow of students entering Ms. Boynton’s office Wednesday. They spent the day sprawled around the center, playing with Play-Doh and coloring in coloring books, as they sought comfort and distraction.”

Need I add the standard caveat: “I am not making this up!”?

To be sure, there were many things said and done by candidate (and now president-elect) Donald Trump that have caused concern, and I do understand why some Muslim or Mexican young people (or others) would be alarmed, fearing the worst.

“Am I going to be deported? Will my family be kicked out of the country? Am I really welcome here?”

Again, I understand why they would be concerned, especially the way the media has portrayed Mr. Trump’s remarks, to the point of working people into a hysteria.

But it is the nature of the reaction to Trump’s shocking election that I’m focused on, along with the way these students are being treated.

Really now, even though millions of conservative Christians would have been terribly upset had Hillary won, do you think that students on Christian campuses would be sitting with therapy dogs and coloring books to comfort them in their grief?

But none of this should not surprise us in terms of the anti-Trump reaction on at these colleges and universities.

These are the same campuses with “safe zones” and with guidelines against “microagressions.”

And these are the same young people whose number one rule sometimes appears to be, “You shall not offend me or hurt my feelings!”

In her book Generation Me, author Jean M. Twenge, Ph.D., painted a picture of many of today’s young people using the description of a woman named Linda, who was born in the 50s, and whose “youngest child, Jessica, was born years after Whitney Houston’s No. 1 hit song “Greatest Love of All” declared that loving yourself was the greatest love.”

Prof. Twenge writes, “Jessica’s elementary school teachers believed that they should help Jessica feel good about herself. Jessica scribbled in a coloring book called We Are All Special, got a sticker on her worksheet just for filling it out, and did a sixth-grade project called ‘All About Me.’ . . .  She dreams of being a model or a singer, takes numerous ‘selfies’ a day, and recently reached her personal goal of acquiring 5,000 followers on Instagram. She does not expect to marry until she is in her late 20s, and neither she nor her older sisters have any children yet. ‘You have to love yourself before you can love someone else,’ she says.”

Again, to repeat, there are many, fine young people today, and they are committed to helping others and making a positive difference in their world. Some of them put their elders to shame.

But the picture painted by Prof. Twenge is all too common, which is why there are elementary schools and middle schools across America that do not keep score in the children’s sports events, since everyone has to win (or, conversely, because no one can lose).

A friend of mine in the business world told me that it’s common now for college and university grads to have trouble on their jobs, but not because they lack intelligence or the necessary academic training. Instead, it’s because they can’t take correction, having been shielded from it during much of their upbringing and education. “You may be my boss, but you’re making me feel bad, which makes you a bad person, since I’m a good person and therefore a good employee.”

I may be exaggerating the sentiments, but not by much.

In the end, the problem is not with an age group as much as it is with a mindset, and it is a mindset that simply doesn’t work in real life – unless you want to be playing with Play-Doh to ease your pain when you’re married with kids and grandkids.