The NBA Is the National Bullying Association

Michael Brown
|
Posted: Jul 22, 2016 12:01 AM
Share   Tweet
The opinions expressed by columnists are their own and do not necessarily represent the views of Townhall.com. 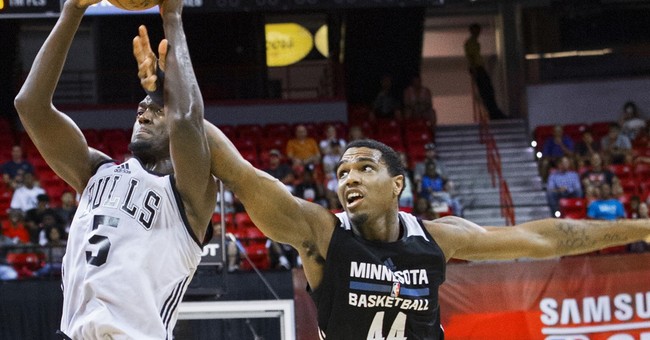 My oldest granddaughter is 15, and thanks to North Carolina’s HB2, if a 15-year-old boy in her school identified as a girl, he would not be allowed to play on her sports team or share her locker room. I for one am glad that North Carolina, my home state since 2003, has taken a stand for common sense, for safety, and for privacy, yet the NBA is punishing the state for protecting its residents, announcing that it will pull next year’s All Star game from Charlotte.

What hypocrisy; what bigotry; what intolerance. The NBA is now the National Bullying Association.

If this was so terrible, why did the NBA agree to bring their annual, week-long, festive event here? The State legislature simply reversed a radical bill passed by the Charlotte City Council earlier this year, a bill which had effectively rendered all public bathrooms and locker rooms gender neutral.

The State simply put things back to where they were before. Why then the outcry from the NBA? Why punish the state for moving things back to the way they when everything was fine?

A few weeks ago, a man who identifies as a woman was arrested for videotaping women in the dressing room at Target, apparently a direct result of Target’s much-protested policy to allow men who identify as women to use the women’s dressing rooms. (And remember: Any male can walk into one of these dressing rooms and say, “I identify as a woman,” and no one can stop him from entering, even if he’s dressed as a man.)

These are the very abuses that North Carolina is seeking to prevent, and while the state cannot stop a private business like Target from engaging in this dangerous social experiment, it can take a stand on a statewide, public facility level. Yet for taking this stand, the NBA has declared North Carolina unworthy of hosting the 2017 All Star game.

Shame on Adam Silver, the Commissioner of the NBA, and shame on all those who stood with him in this disgraceful decision.

The Alliance Defending Freedom pointed out that “Nearly 1 in 8 high school girls have been sexually assaulted” and “Nearly 1 in 5 women have been sexually assaulted,” noting that, “For many sex abuse survivors, the mere presence of a biological man in a women’s restroom, locker room, or changing room is a trigger that causes severe emotional and mental harm – regardless of that man’s intentions.”

What does the NBA say to them?

Commissioner Silver stated, “We have been guided in these discussions [about the All Star game] by the long-standing core values of our league. These include not only diversity, inclusion, fairness and respect for others but also the willingness to listen and consider opposing points of view.”

In reality, the NBA has sided against these very values, unless the words “diversity, inclusion, fairness and respect” have taken on a whole new meaning, since the NBA is showing zero tolerance for any diversity of views, absolute exclusion of all those who want to keep a biological boy out of a girl’s shower room, complete unfairness towards young ladies who would now be forced to compete against young men in sports, and utter disrespect for the commonsense values of the clear majority of the residents of North Carolina.

As I asked in a previous article, would the NBA allow a star like LeBron James to play in the WNBA if he felt he was a woman trapped in a man’s body? If not, why are they forcing schools to do what they would never do?

As for showing a “willingness to listen and consider opposing points of view,” you don’t demonstrate this by pulling a previously-scheduled, major event out of a city. This is what is called bullying, punishing, and intimidating.

Ironically (and hypocritically), LGBT leaders, who frequently share poignant stories of the bullying they have experienced, are now cheering on the bullying of the NBA. The bullied have become the bullies.

But the story doesn’t end here.

To underscore its hypocrisy, the NBA announced that it has relocated the 2017 All Star game to New Orleans, a city that has the same ordinances as Charlotte, allowing “for ‘separate bathroom, restroom, shower or similar facilities for males and females’ in its local ordinance.”

In terms of bathroom access, there’s no fundamental difference between Charlotte and New Orleans, yet Charlotte is being punished for refusing to bow down to the goals of radical gay activists.

Not only so, but both North Carolina and Louisiana, along with 22 other states, have filed suit against the federal government, protesting the Obama administration’s gross overreach in this very area – trying to force schools to comply with radical LGBT activism – yet Louisiana is being rewarded and North Carolina is being punished.

That leaves only reasonable course of action: Stand up to the bullies and ride out the storm until common sense prevails again. The bullying must ultimately backfire.