By Failing To Recommend The Indictment Of Hillary Clinton, The FBI Indicted Itself

Michael Brown
|
Posted: Jul 06, 2016 9:20 AM
Share   Tweet
The opinions expressed by columnists are their own and do not necessarily represent the views of Townhall.com. 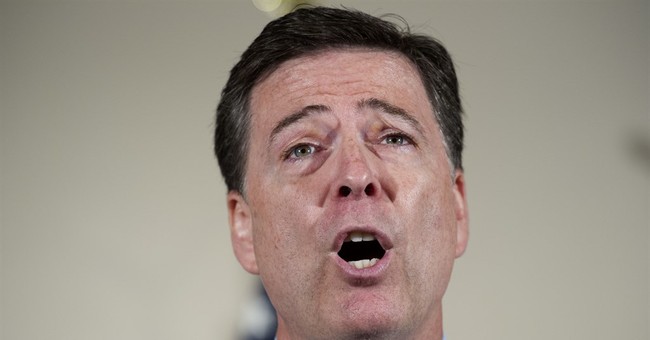 Like many Americans, I followed yesterday’s news conference with FBI Director James Comey with tremendous interest, wondering what the outcome would be. I thought to myself, “Certainly, Mrs. Clinton is guilty of serious negligence, but will the FBI dare recommend that she be indicted?”

The answer confirmed the suspicions of many (if not most) of us: Absolutely no way!

No way would the presumptive Democratic presidential nominee, a nominee named “Clinton” at that, be indicted under this administration. No way would Attorney General Loretta Lynch bring charges, and no way would the FBI recommend those charges. It simply was not going to happen.

For a moment, I hoped this would not be the case. After all, the findings against Hillary, as listed by Comey, were quite substantial, not to mention her apparent lies about the content of her emails and the obvious attempts to cover up those lies.

What she did was unthinkable for a Secretary of State, potentially exposing some of our most important military and security secrets to our worst enemies, and the FBI carefully documented this.

Ah, but there’s a catch, we were told. She did not intend to endanger America (including Americans serving our nation covertly abroad), therefore she should not be prosecuted.

What kind of logic is this?

Since when does “intent” come into play when it comes to breaking rules and potentially imperiling your country?

The night guard who fell asleep on his watch did not intend to let a deadly intruder invade the barracks, killing the guard’s fellow-soldiers, but he can be court martialed for his negligence.

The commanding officer who got drunk didn’t intend to have his judgment impaired during a critical battle, leading to the loss of many lives, but he too can be brought to military court for his poor decision making.

And President Clinton certainly didn’t intend for his sexual dalliances to become public fodder, but that didn’t stop him from being impeached.

Intent is not the issue here. Gross negligence is the issue. Extreme carelessness is the issue. Behavior inappropriate for the Secretary of State is the issue – and Comey made clear in his report that, in this regard, Hillary Clinton was guilty.

For good reason Sen. Ted Cruz wrote, “Director Comey has rewritten a clearly worded federal criminal statute. In so doing, he has come dangerously close to saying that grossly negligent handling of classified information should not result in serious consequences for high-level officials. In a nation where the rule of law is supposed to matter, this is troubling.”

No wonder that 89% of those responding to my Twitter poll felt that the FBI’s recommendation not to indict was “An outrage,” compared to only 3% who said the recommendation was “Very fair” (another 7% felt that, “The law is unclear”).

No wonder that even CNN.com carried an editorial by Buck Sexton titled, “Hillary Clinton makes a mockery of justice.”

For Sexton, who was previously “a CIA counterterrorism analyst,” the FBI’s recommendation was “self-contradictory – and an outrage.” He stated that “Clinton's conduct with her email system was reprehensible, as were her mendacious defenses of it” and that “Clinton swore an oath, and had a sacred duty to protect classified information: She failed, repeatedly.”

He rightly concluded that “a secretary of state who showed ‘extreme carelessness’ in her handling of classified information should be disqualified from holding higher office -- or even a security clearance, for that matter -- and be made to answer for her recklessness.”

In reality, not even Hillary Clinton’s fiercest political opponents claimed that she intentionally leaked highly sensitive to our enemies or that her intent was to endanger America. The question from the start had to do with her flaunting of the rules, with her irresponsibility, with the potential harm that could result from her choices, and on all those counts, the FBI, in effect, found her guilty. They simply refused to pull the trigger, after making a compelling case.

Where then does this leave us?

First, it is hardly an exoneration for Hillary, although her supporters will seek to portray it that way. Rather, what she did was criminal, even if she was not convicted of criminal behavior. The public (and specific) exposing of her recklessness will be another strike against her in what could end up being a razor-tight election.

Second, the FBI’s decision will only add to our national skepticism, making us question “the system” even more. (For Sexton, the FBI’s recommendation was “deeply depressing.”) At a time when Americans would love to trust our nation’s law enforcement agencies – in particular in the war against terror – many will find themselves scorning one of our most important security agencies, the FBI.

Third, this will further fuel the fires of the Trump campaign (“It’s all rigged!”), playing into a theme which has proved effective in the past and has helped rally support his way. He does well when perceived as the outsider fighting against a corrupt and rigged system.

Fourth, this will encourage people of faith to pray all the more for sweeping reformation in the nation, from the top down and from the bottom up.

Something is not just rotten in Denmark, as the old saying goes. Something is rotten right here. We do well to address it.