Michael Brown
|
Posted: Feb 22, 2016 12:01 AM
Share   Tweet
The opinions expressed by columnists are their own and do not necessarily represent the views of Townhall.com. 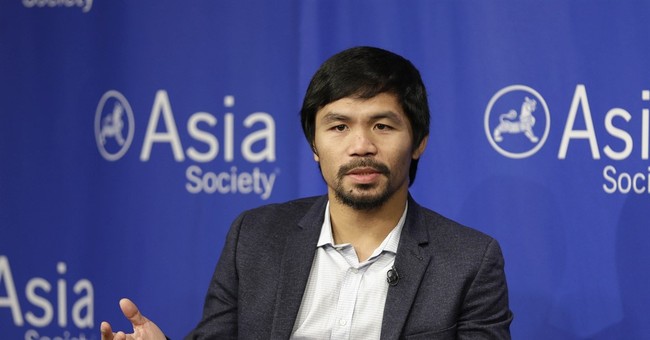 Although Manny Pacquiao quickly apologized for his remarks about homosexuals, Nike dropped him like a hot potato. In contrast, Nike never dropped Tiger Woods despite the revelations of his serial adulteries, even though those led to the destruction of his marriage and worldwide public shame. Why the double standard?

Or could it be that, because Tiger is still worth more money, his transgressions are more forgivable?

While appearing on a local Philippines TV station, Manny said, “It’s common sense. Do you see animals mating with the same sex? Animals are better because they can distinguish male from female. If men mate with men and women mate with women they are worse than animals.”

Not surprisingly, there was an immediate uproar, and Manny quickly apologized, saying, “I'm sorry for hurting people by comparing homosexuals to animals. Please forgive me for those I've hurt. I still stand on my belief that I'm against same sex marriage because of what the Bible says, but I'm not condemning LGBT. I love you all with the love of the Lord. God Bless you all and I'm praying for you.”

There’s obviously no comparison between Manny’s words and Tiger’s acts (I would ask male Nike executives if their wives would prefer that they said what Manny said or did what Tiger did). And again, Manny immediately apologized, with sincerity.

But that was not enough for Nike.

Nike’s statement read, “We find Manny Pacquiao’s comments abhorrent. Nike strongly opposes discrimination of any kind and has a long history of supporting and standing up for the rights of the LGBT community. We no longer have a relationship with Manny Pacquiao.”

For Manny’s part, he does not seem troubled about losing the endorsement and has reinforced his opposition to homosexual practice, stating, “I rather obey the Lord’s command than obeying the desires of the flesh. I’m not condemning anyone, but I’m just telling the truth of what the Bible says. The truth from the Bible is what changed me from my old ways.

“2 Corinthians 6:9: ‘Or do you not know that wrongdoers will not inherit the kingdom of God? Do not be deceived: Neither the sexually immoral nor idolaters nor adulterers nor men who have sex with men.’ God Bless everyone i love you all.”

At this point, though, you might be saying to yourself, “Well, what does Stephan Curry have to do with all this?”

Curry is an openly committed Christian and the best player in basketball this year, and he before he had a sneaker contract with Under Armour, Nike passed up on him twice.

I have read articles speculating on why Nike chose not to sign him, but we do know that before he signed with Under Armour, he made clear that he wanted to put Phil 4:13 on the tongue of the sneaker with the underside reading, “I can do all things.” The message is from Philippians 4:13 which states, “I can do all things through Christ who strengthens me.”

Some have claimed that this was another factor in Nike’s decision not to match Under Armour’s offer, but I have not been able to verify that. (If you can find any verifiable information about this, please post it in the comments section.)

It would not be surprising, though, if Stephan’s strong message of faith was not to Nike’s liking. As for their skepticism that his shoes would sell (there’s no dispute that they were concerned about this), they’re actually selling off the shelves.

What we do know is that when Tiger fell, Nike stood with him.

As Reuters reported on December 14, 2009, “Nike Inc Chairman and co-founder Phil Knight said the scandal surrounding Tiger Woods is ‘part of the game’ in signing endorsement deals with athletes and did not back away from the athletic shoe and clothing maker's relationship with the golfer.”

Knight added, “I think he's been really great. When his career is over, you'll look back on these indiscretions as a minor blip, but the media is making a big deal out of it right now.”

With a mentality like that, it wouldn’t surprise me in the least if Stephan Curry’s strong Christian message wasn’t welcomed by Nike either.