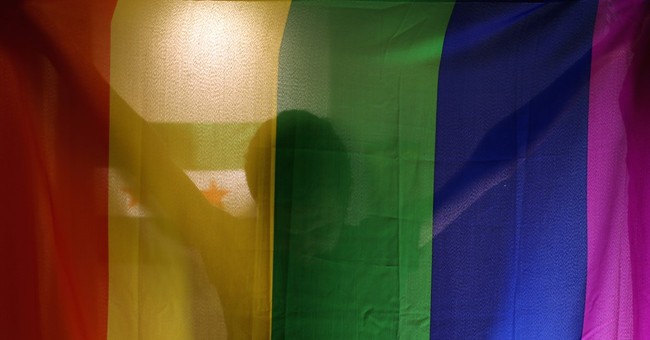 It used to be pretty simple.

A man marries a woman.

They have a baby together.

The man is the father and the woman is the mother.

Well it’s not so simple anymore.

Is this starting to make your head spin?

If so, this headline will not help. It reads: “Male partner pregnant with baby of transgender couple in Ecuador.”

What? A man is pregnant? And he’s part of a transgender couple? How does this work?

According to the story published by Fox Latino News, “A couple in Ecuador is making history with a unique pregnancy. The father-to-be is carrying the baby of his transgender partner.”

The couple in question goes by the names Fernando Machado and Diane Rodríguez, but Fernando was born María while Diane was born Luis.

Although they take hormones to change their bodies to conform to their gender perceptions, they have not had sex-change surgery, otherwise, they would not have been able produce a baby together.

That also means that even though Diane fathered the baby and Fernando will carry the baby in his womb (are you getting all this?), Diane, the biological male who supplied the sperm, will be the mother and Fernando, who provided the egg, will be the father.

As Rodríguez, who is a leading LGBT activist in Ecuador, told the Associated Press, “We're trying to break the myths about transsexuality.”

It looks to me like they’re creating a whole new set of myths.

Rodríguez also said that, “The [Catholic] church is always criticizing gays and homosexuals for adopting children, so it would be a contradiction to criticize us for giving birth naturally.”

I would say that is putting a whole new spin on the meaning of the word.

What is “natural” is for a man to father a baby and for a woman to conceive, carry, and deliver that baby, just as happens around the world every hour of the day, and just as has happened billions of times before.

Sadly, this is not the first such case of a unique transgender pregnancy.

And we all heard about the “pregnant man” a few years back. (Note to earth: There is no such thing as a pregnant man.)

Apparently all this is “natural” too.

To be sure, it is tragic to read of the many murders of trans-identified individuals in Latin America (the article about “Fernando” and “Diane” closes with those very stats), and as I always state when writing about these issues, I can’t imagine what kinds of emotional and social trauma these individuals have endured.

It’s also possible that this couple claims to be happy and well-adjusted, and they might be very committed to the child they are bringing into the world.

But none of this minimizes the madness of the situation nor does it contradict what I have repeated over and over again: This cannot possibly be the best case scenario for these individuals, and this “unique” pregnancy only highlights the need to get to the root causes of transgender confusion so that we can help them find true wholeness.

As for the child of this couple in Ecuador, can anyone say to me with a straight face that having your mother be your father and your father be your mother is in the best interest of the child? That there will no confusion or emotional scars for this child as he or she grows up and understands biological and social realities? Does anyone really believe that this is some kind of social “advance” and that we should be celebrating it rather than mourning it?

May God help this couple find their real identity, and may it happen speedily for the good of their offspring.

Otherwise, we’ll have to start carrying a scorecard to sort out the members of a family.