Spiritual Suicide: When European Churches Sell Their Souls to Islam 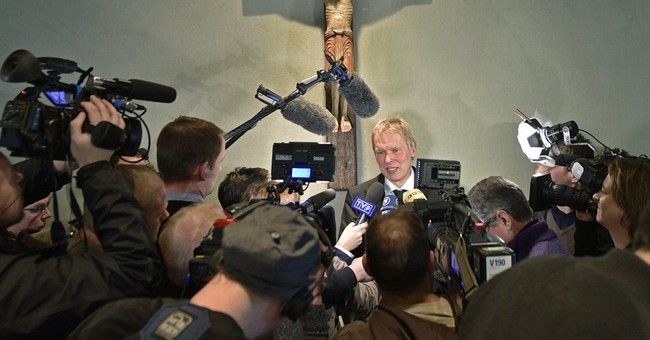 At a time when Christians in the Middle East are being tortured, beheaded, and crucified rather than denying Jesus, Christians in Europe – I should say so-called Christians – are renouncing the Great Commission and removing the cross (literally) to make peace with Muslims.

What kind of madness is this?

Last month, in Sweden, the Bishop of Stockholm “proposed a church in her diocese remove all signs of the cross and put down markings showing the direction to Mecca for the benefit of Muslim worshippers.”

As reported on Breitbart.com, “Calling Muslim guests to the church ‘angels’, the Bishop later took to her official blog to explain that removing Christian symbols from the church and preparing the building for Muslim prayer doesn’t make a priest any less a defender of the faith. Rather, to do any less would make one ‘stingy towards people of other faiths’.”

Is it any surprise that this “Christian” leader, Eva Brunne, made news in 2009 when she was installed as the Church of Sweden’s first openly lesbian bishop?

But this was not an isolated incident.

In Germany, an “evangelical priest has offered his parish church up to become migrant housing, but will be stripping out most of the fittings to ensure their comfort – including all symbols of Christianity.” (Note that in Germany, “evangelical” simply means “Lutheran,” referring to the official state church.)

Obviously, this church had already removed real Christianity from its soul, as noted on the church website, “Refugees welcome… we are all citizens with the saints and members of the household of God.”

So, Muslims chanting Allahu Akbar and militantly denying that Jesus is the Son of God belong to the same spiritual family as Christians proclaiming Jesus as Lord and celebrating His death and resurrection.

This is absolute theological nonsense that makes a complete mockery of the cross.

As reported on the Religion News Service, “One of Germany’s largest Protestant regional churches has come under fire from other Christians for speaking out against efforts to convert Muslims just as tens of thousands of refugees from the Islamic world are streaming into the country.”

Yes, it’s time to throw out the Great Commission!

And this was a carefully thought out strategy, reflected in a new position paper in which “the Evangelical Church in the Rhineland says the passage in the Gospel of Matthew known as the Great Commission — ‘Go therefore and make disciples of all nations, baptizing them in the name of the Father and of the Son and of the Holy Spirit’ — does not mean Christians must try to convert others to their faith.”

Can they even believe what they wrote? Do they not realize that the only reason there is Christianity in Germany (or any other part of the world) is because someone brought the message to that country or people – sometimes costing the messenger his or her very life?

Yet this blasphemous position paper, entitled “Pilgrim Fellowship and Witness in Dialogue with Muslims,” argues that, “A strategic mission to Islam or meeting Muslims to convert them threatens social peace and contradicts the spirit and mandate of Jesus Christ and is therefore to be firmly rejected.”

Ironically, while these European churches are selling their souls to make peace with Islam, in Norway, it was

Oswald Smith famously said that the church that does not evangelize will fossilize. The reality is that these churches already gave up the great commission years ago, becoming nothing more than fossils of the faith.

May God raise up a powerful, witnessing church in Europe before it is too late, and may He strengthen those who are still standing strong in the midst of the current apostasy.