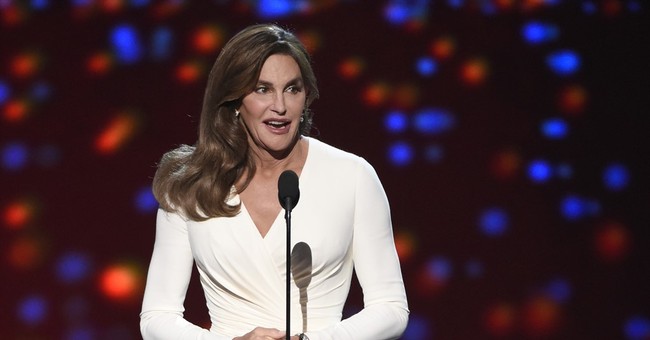 I was filling out a form at the doctor’s office the other day when I was reminded of a stark truth: Biological, genetic males will never be females, no matter how much surgery they have and no matter how many hormones they take.

The medical form had a line that said: “FEMALES: Time of last menstruation?” – and in a flash, I said to myself, Yes! There really are differences between males and females!

And that’s another reason why Bruce Jenner will never be a woman, no matter how hard he tries. (Let me pause for a moment for all those who want to shout, “Bigot! Hater! Transphobe! You’re worse than Hitler!” Go ahead and get that out of your system, then you can keep reading. But feel free to pause every so often to vent your feelings.)

I was reminded of this stark reality again when my son-in-law Jimmy played part of the video of Bruce Jenner’s acceptance speech for his ESPY’s courage award.

Jimmy had pulled up the clip on his cell phone, and I was sitting next to him when I heard a man speaking.

It was only when I looked over at his phone that I realized who the man was – now looking like a strangely disfigured woman – and Jimmy said to me, “It looks like a joke, but everyone is going along with it.”

To not go along with this – no, let me take this a step farther – to not celebrate this wonderful moment is to be a mean-spirited, close-minded bigot of the worst kind. Even if you’re not smiling broadly enough and clapping vociferously enough when “Caitlyn” Jenner is announced is to mark yourself as a bigot (just ask former NFL icon Brett Favre).

And God forbid you say, “I just know that's Bruce Jenner and I'll leave it at that,” as former heavyweight champion Evander Holyfield said.

The vitriol directed at Holyfield for uttering these simple, common sense words is vicious beyond description, but it’s fully justified, of course, because he’s being judgmental.

It’s a good thing for the world of sports that Jenner isn’t a young, world class athlete today.

Otherwise, the Olympic committee and other sports organizations would have to decide if this athletically gifted male could compete with females. Would they dare be transphobic and bigoted and tell him he couldn’t?

These issues have already come up in the world of combat sports, where a so-called male-to-female fighter has been dominating his female opponents to the point that some have openly complained and others have refused to fight him.

Is this really fair?

It appears that the female fighters involved are not impressed with the testimony of medical experts who have declared that this biological male, because of female hormones, has no physical advantage over his opponents.

The absurd, even surreal nature of this discussion is underscored by an article that appeared on the website for KOAT News, an ABC affiliate in Albuquerque, New Mexico.

The headline reads, “Birth certificate keeps transgender student off volleyball court,” and the story begins with these touching words: “Like many teenage girls, Alex Trujillo likes makeup, has teen idols and stays active.

“Yet, she can't play on the girl's volleyball team at Laguna-Acoma High School. School officials say that's because Trujillo was born a male.”

How bigoted and discriminatory! How utterly transphobic!

How can this be? The school will not let this biological male play on the girls’ volleyball team and compete against other girls simply because of a piece of paper?

The article, which always refers to him as her, states that “she isn't free to play the sport she has a passion for,” explaining that, “The gender on student's birth certificate dictates which team he or she will play for, according to the New Mexico Athletic Association. In New Mexico, someone can amend their birth certificate but only after reassignment surgery.”

Did you catch that? The gender on the birth certificate dictates what side you play on.

To be precise, it’s whether you are male or female that dictates what side you play on, because males have athletic advantages over females, and the birth certificate simply notes whether you are male or female. Even after sex-change surgery, those advantages and differences largely (or completely) remain, which means that you still should not be able to switch sides in sports.

But even with the allowance for changing one’s birth certificate after sex-change surgery, which is still outrageous, this wasn’t enough for transgender advocates, who say that the New Mexico laws are “unfair because not everyone opts to have that surgery.”

Once again, we are catering to social insanity, and if we really care about Alex (or about Bruce Jenner or about countless others who struggle deeply with gender identity issues), we must stop collaborating with this social madness and do whatever we can to help them find wholeness from the inside out.

The news of the last few days – from the New Mexico story to the prestigious ESPY awards – reminds us that we have our work cut out for us.

Who is going to drink the Kool-Aid next?