God's Answer To The Moral Insanity Of The World 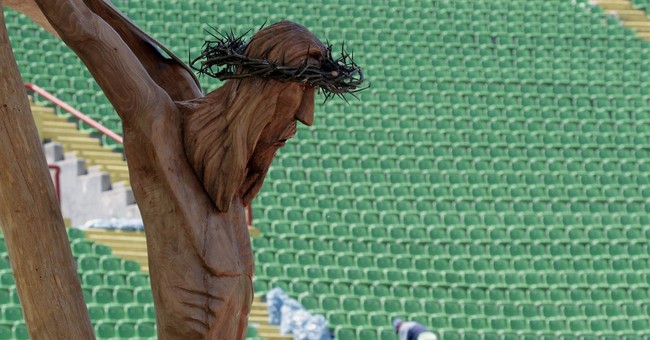 God’s answer to human rebellion remains the same as it has always been: the cross of Christ. That must be the answer we proclaim to the world, without shame or doubt.

It is true that we are in the midst of an unprecedented moral and cultural decline in our nation, and it is true that there is no political or social solution that can turn the tide.

But it is also true that the world has been crazy since Adam’s fall, in a constant state of alienation from the Lord (Ephesians 2:1-3; remember that Cain, the firstborn son of Adam and Eve, was guilty of fratricide, murdering his younger brother Abel).

John wrote that the whole world is under the power of the evil one (1 John 5:19), the god of this age, whom Paul tells us has blinded the minds of those who do not believe (2 Corinthians 4:4).

Is it any wonder that the world hates God and His Word?

Certainly, it is right for us to be grieved over the sin of the world, and it is right for us, as children of light, to expose it (Ephesians 5:11-14). But it is wrong for us to expect a political leader or party to turn America to God or even to expect the secular media to report righteously.

We alone have the antidote to our nation’s moral malaise. We alone have the solution, and it is found in a person, the Lord Jesus, and in a message, the gospel. Transformation comes through Him.

Last month, on May 13th, I devoted an entire two-hour broadcast on the Line of Fire to the theme, “Such Were Some of You,” asking callers to share their testimonies, and the testimonies they shared were extraordinary, moving me to tears.

I also asked people to post a short note on Facebook, sharing what the Lord had delivered them from, and there too, the responses were overwhelming.

Janet posted, “Suicide at age 19. I will be turning 60 years old this month.”

Michael wrote, “Jesus saved me from heroin, a life of homosexuality, and hell. He saved me from the penalty of sin, the power of sin, and one day the very presence of its existence. He saved me from self so that he could be magnified in me whether by life or by death.”

Terry posted, “Drug dealing, pot smoking and growing, cocaine snorting, licentious lifestyle that had me bound for the eternal torments of weeping and gnashing of teeth. Other than that, I was a good ole boy according to the world’s standards.”

Natalie said, “He saved me from suicide, partying, gossip, drugs, and a completely lost mindset.”

Thomas added, “Insanity; He has miraculously saved me from death 3 or 4 times.”

And on and on it went, by the hundreds, as believers from every hellish and hopeless background called and posted with amazing testimonies of the grace of God.

What happens, then, when the numbers of those transformed by the gospel multiply and grow? What happens when the thousands become millions and the millions become tens of millions?

That’s when we have a brand new Jesus Revolution, a gospel-based moral and cultural revolution that will rock this nation to its very foundations. It is the revolution America must have.

I’m all for proper political involvement and righteous social action, and these do play a role in cultural transformation. But that role is small compared with the role played by a fresh outpouring of the Spirit on the Church accompanied by the preaching of the cross and resurrection, the message that is foolishness in the eyes of man but represents the very power of God in action,

That alone is the path to a national awakening, and without the fearless and compassionate proclamation of the gospel, there will not be a holy counterculture revolution, a pushing back of the tide of godlessness.

So let us seek God earnestly with prayer and fasting, knowing that revival comes from Him, let us conduct ourselves as true followers of Jesus, not being conformed to the pattern of this world but being transformed by the renewing of our minds (Romans 12:1-2), and let us share the good news about our Savior whenever and wherever we can: Jesus paid for our sins on the cross, rising from the dead to declare His victory, and ascending to the right hand of the Father. He is the Lord of all.