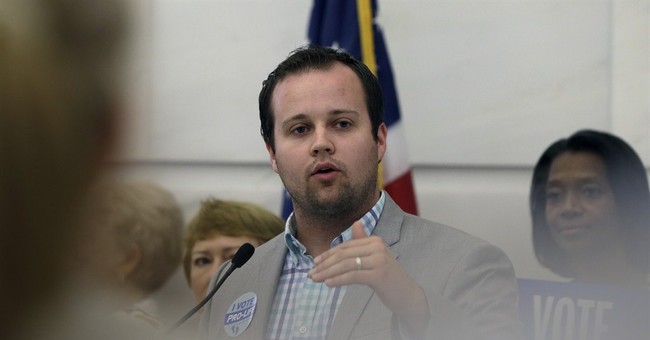 I have no desire to pile on with more comments about Josh Duggar, who appears to be a very serious and committed Christian who has made no excuses for the sins of his youth and who deeply desires to make a positive impact for the Lord in the years ahead. I simply want to share some redemptive thoughts, supplementing some of the excellent statements made by others, including former governor Mike Huckabee and Southern Baptist leader Russell Moore.

1. Jesus really does change people. While critics of the Duggar family want to indict them (along with other, evangelical Christians, especially those with large families) for Josh’s actions, and while many seem ready to throw Josh under the bus, the fact is that while he did sin grievously, through repentance, faith and counseling, he became a new man. Jesus really does transform sinners.

How many of us did wicked things as teenagers? I was shooting heroin at the age of 15 and broke into some houses and even stole money from my own father before being radically converted at the age of 16. I was profane, filled with pride, anger, and lust, yet the Lord had mercy on me and totally turned my life around.

Some of us continued to live like this into our adult years, only to find mercy and new life then, meaning that the transformation was even more dramatic.

For me, the first lesson from this story is this: Whoever you, whatever you’ve done, there is hope in the Lord. As Mike Huckabee said, “‘inexcusable’ . . . doesn’t mean ‘unforgivable.’”

As Paul wrote to the Corinthians, “Or do you not know that the unrighteous will not inherit the kingdom of God? Do not be deceived: neither the sexually immoral, nor idolaters, nor adulterers, nor men who practice homosexuality, nor thieves, nor the greedy, nor drunkards, nor revilers, nor swindlers will inherit the kingdom of God. And such were some of you. But you were washed, you were sanctified, you were justified in the name of the Lord Jesus Christ and by the Spirit of our God” (1 Corinthians 6:9-11).

2. There’s no excuse for sin, so own up to it. In today’s culture, almost no one is guilty of anything. It’s someone else’s fault, someone else’s responsibility, not our own. We’re all victims, and the reason we do bad things is because someone else wronged us. Isn’t that how we think today?

I’ve even heard athletes apologize for some really heinous actions by saying, “I’m not happy with the way things happened,” rather than saying, “What I did was wrong and I have no excuses. Please forgive me. I’m seeking to get to the root of my problems and address them.”

What a vast difference between the two attitudes.

As Proverbs states, “Whoever conceals his transgressions will not prosper, but he who confesses and forsakes them will obtain mercy” (Proverbs 28:13).

According to the accounts we’ve all heard, Josh confessed his sin to his parents as well as to the proper authorities, and as a family, they worked through the issues. Now, half a lifetime later (he’s 27 and is married with four children), when confronted with a police report about his past, he did not minimize his sin nor did he excuse it. He also resigned from the fine Christian organization for whom he worked, not wanting to bring any negative attention to their work.

When I see someone respond like this, I am filled with hope. In fact, over the years, I’ve seen that people who committed uglier sins but took full responsibility and repented did far better than those who committed less serious sins and tried to sweep them under the rug.

3. Even godly families have kids who mess up badly. Nancy and I only had two kids, and we sought to be godly parents and set godly examples. Yet our older daughter went through a real period of rebellion in her teen years.

As parents, we felt miserable, and I would wonder what I was doing wrong.

Of course, we dealt with her rebellion head on and prayed like crazy for her to really encounter the Lord, but while it was happening, it was terribly deflating spiritually. What kind of father am I? How can I be so ineffective?

Today, we all laugh about those years, and our daughter, who is now 37 and is a devoted wife and mother, is so grateful for the way she was raised. (She and Nancy are the best of friends and are in constant contact.)

The fact that the Duggars, who successfully raised 19 children in the Lord (who can imagine that?), had to deal with one of their kids committing serious sexual sin at 14 should actually encourage other parents rather than discourage them. And perhaps, they can teach us today how this tragic incident helped them come together as a family and draw closer to the Lord.

4. Josh can be an ambassador on behalf of the abused, even helping the abusers as well. While it can feel like your life is over when your past, largely private sins become public (how many of us would like for that to happen?), the fact is that Josh’s future can be bright in the Lord.

He can call on others who are sinning to come clean and get help, using his own example redemptively. And he can encourage those who have been abused to realize that they are not guilty and should not feel shame, also encouraging churches to embrace those who come for help rather than making them feel as if there is something wrong with them.

Why should those who have suffered abuse be stigmatized? They should be our priority for healing and restoration.

5. We need to be careful how we judge. There are many fans of the Duggars who are upset with what they feel is a witch hunt against a godly family, representing one more attempt to remove them from reality TV. (Let me say without qualification that there is life after reality TV, and if the Duggars never do another broadcast, their lives can still be overwhelmingly blessed.)

But would we have had this same attitude of mercy and forgiveness if this was the child of a gay couple? Would we have said, “This proves that gay parents are no good!”?

I certainly believe that kids deserve a mom and a dad and that, optimally, they will do best with a mom and dad, but I don’t indict all gay couples because of the failings of one of their kids

So, if you want to show mercy, be consistent. We can all fall into the trap of selective compassion.

6. There are consequences to our actions, but with God, our worst mistakes can become stepping stones to spiritual growth.

Most of us have done things we wish we could take back, and in some cases, the consequences of our bad choices and sinful actions last for decades. Yet with the Lord, no matter how great the stigma of our sin, if we will humble ourselves before Him, He can take those stumbling blocks and turn them into stepping stones, to the point that the worst things that ever happened to us become the best things that ever happened to us.

To the core of His being, God is a redeemer, and I’m personally praying and believing that for Josh Duggar and his entire family, God will turn this painful situation around for greater good.