The New York Times Wants Us to Rewrite the Bible 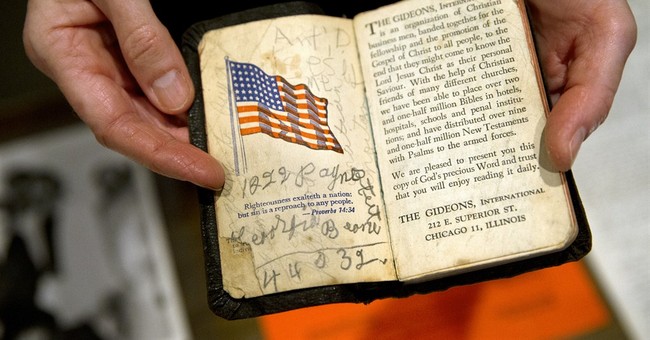 How can the religious community live in peace and harmony with the LGBT community? New York Times columnist Frank Bruni has the solution. Just rewrite the Bible.

In his April 3rd column, “Bigotry, the Bible and the Lessons of Indiana,” Bruni, himself gay, recognizes that Christian beliefs are not necessarily grounded in hatred. The problem, he claims, is that, “Beliefs ossified over centuries aren’t easily shaken.”

Bruni, for his part, wants to shake us free from our fossilized faith.

According to Bruni, who evidences little or no understanding of how believers view the Scriptures (namely, as God’s inspired Word), if we hold to the view that homosexual practice is sinful, this is our “decision” and “choice.”

After all, he argues, the belief that homosexual practice is sinful “prioritizes scattered passages of ancient texts over all that has been learned since — as if time had stood still, as if the advances of science and knowledge meant nothing.”

So, Bruni thinks he can simply dismiss the Scriptures as “ancient texts,” explaining that “all writings reflect the biases and blind spots of their authors, cultures and eras.”

But for devout Jews and Christians, the Scriptures are not just any writings, full of biases and blind spots.

If that was the case, there would be no basis for our faith whatsoever and no absolute moral foundations of any kind.

Forget about homosexuality. We would have no reason to hold to any of the fundamentals of our faith if Bruni’s description was accurate.

Not only so, but Bruni wrongly claims that for those of us who hold to the authority of the Bible, “the advances of science and knowledge” mean “nothing.”

To the contrary, all the scientific advances in the world cannot determine what is or is not moral, and there’s nothing we know today that changes our view that God did not design men to be with men and women to be with women. The new interpretations of Scripture that the “progressive” Christians are touting (and which Bruni applauds) are not based on new textual or archeological or linguistic discoveries. They are based primarily on emotional arguments, since there is nothing in the Bible that supports homosexual practice.

Bruni also repeats the common misconception that there are just a handful of “scattered” texts that deal with homosexual practice.

To the contrary, every law dealing with marriage and family, every positive example and precept, every illustration in the Bible about sexuality morality is based on heterosexual relationships (see, for example, Genesis 2:24; Exodus 20:12; Matthew 19:4-6; Ephesians 5:22-33).

That’s why there was not a need to condemn homosexual practice on every page. Everything in Scripture was against it. (To be perfectly clear, the Bible plainly teaches that God loves every human being, that all of us are fallen and in need of redemption, and that Jesus died for heterosexual and homosexual alike. The issue here is the meaning of marriage and the standard of sexual morality.)

Bruni cannot countenance this for a moment. Instead, he claims that our biblically-based faith “elevates unthinking obeisance above intelligent observance,” which is why “our debate about religious freedom should include a conversation about freeing religions and religious people from prejudices that they needn’t cling to and can indeed jettison, much as they’ve jettisoned other aspects of their faith’s history, rightly bowing to the enlightenments of modernity.”

So, those of us who hold to biblical morality are “unthinking” and “prejudiced” people who need to be “freed” from our antiquated beliefs.

It’s high time, Bruni opines, for us to catch up with the 21st century. How utterly primitive of us to believe that there’s anything wrong with homosexual relationships or acts!

Bruni, however, sees positive trends, pointing to a number of books by Christian authors who advocate a reinterpretation of the Bible, claiming that we have outgrown other biblically-based views over time, like the justification of slavery or the nature of gender roles.

The truth is that the Bible was misused to justify slavery, segregation, and the oppression of women whereas it is rightly used to condemn homosexual practice. (For a relevant lecture, see here.)

Bruni cites with approval a quote from Mitchell Gold, a furniture maker and gay philanthropist who says that “church leaders must be made ‘to take homosexuality off the sin list.’”

And Bruni means it when he says “made to” – as in pressured to or forced to or coerced to. As he writes at the end of his column, “His [namely, Gold’s] commandment is worthy — and warranted. All of us, no matter our religious traditions, should know better than to tell gay people that they’re an offense. And that’s precisely what the florists and bakers who want to turn them away are saying to them.” (Of course, Bruni misrepresents the positions of these Christian business owners as well, but why deal with truth when caricature is so much more effective?)

So, rather than follow the biblical commandments, which are explicit and unambiguous when it comes to both the heterosexual nature of marriage (“from the beginning,” as Jesus said) and the sinfulness of homosexual practice, we should follow the new “commandment” of Bruni and Gold and simply rewrite the Bible.

Well, here’s a note to Mr. Bruni and the New York Times: A billion years from now, when the names of Frank Bruni and Mitchell Gold and the Times itself are long forgotten, the words of God will still stand (Isaiah 40:7-8; Matthew 24:35), and those florists and bakers whom you ridicule in this world will be highly esteemed in the world to come.

The fact is that churches and denominations and religious groups may come and go, but the Word of God is here to stay.

That is not about to change.