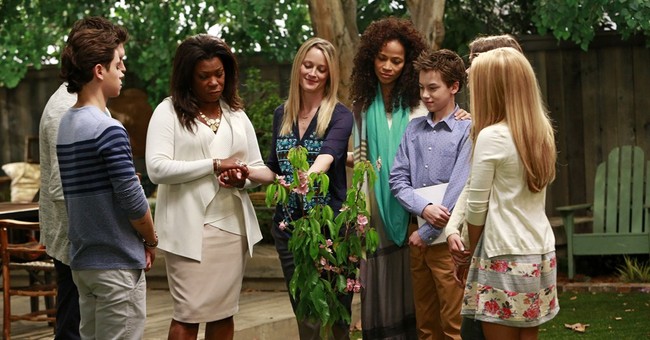 It has been called “The History-Making Gay Kiss,” as “The Fosters” TV show, which airs during prime time on the ABC Family network, featured the “Youngest Same-Sex TV Kiss Ever.” Yes, on a so-called “family friendly” network, two 13-year-old boys locked lips, and gay activists and their allies are celebrating the moment.

GLAAD, formally known as the Gay and Lesbian Alliance Against Defamation, stated that, “ABC Family's 'The Fosters' breaks new ground with Jude and Connor kiss.” (For those who are not familiar with the show, Jude is raised by two lesbians, his adoptive parents.)

Gabe Bergado, writing for the Daily Beast, claimed that the kiss set “a fantastic standard,” one that “reassures all the real-life Judes and Connors out there that their feelings of self-discovery during those middle school and junior high years are valid.”

Personally, I find this is heartbreaking, not heartwarming, tragic, not terrific.

First, there is the power of example, either for good or for bad.

Young people in particular are influenced by what they see on TV and in the movies, with little boys dressing up like Superman or Spiderman and little girls mimicking the looks of the latest starlet.

As they get older, it’s not just a matter of playing silly dress-up games. Instead, these kids are now emulating the lifestyles of those they follow, and so a sexy dance to a 14-year-old looks a whole lot different than it did when the child was five.

I can testify firsthand to the power of negative examples.

I started playing drums at the age of eight, and when I was 13, I went to my first rock concert, seeing the Jimi Hendrix Experience at the New York Philharmonic in 1968. And it really was an experience.

Everything about the band was countercultural and radical, appealing to my flesh and drawing me in. I wanted to be like the rock stars!

So, when I was just 14 years-old and was offered a joint for the first time, I thought to myself, “The rock stars get high, so I think I’ll try it.”

There was also a subtle pull to do something illicit, but I’m 100% sure that without the influence of rock music and rock culture, I never would have thought of getting high at that point of life.

The rest, as they say, is history, as I went from pot to hash to LSD and ups and downs to snorting speed to shooting speed and then heroin and cocaine and other drugs before the Lord graciously saved me at the age of 16 in 1971.

Is it any coincidence that back in 2003, Madonna and Brittney Spears kissed on national TV and, more recently, Katie Perry kissed a girl and liked it, and now lots of other girls are doing the same?

Parents, you make a grave mistake if you underestimate the power of negative examples, especially through TV, movies, social media, and Internet.

Second, these kissing and sex scenes are impacting children at a volatile stage in their sexual and emotional development, potentially leading to even greater confusion, not to mention sexual experimentation.

Remember, we’re talking about developing children here, about kids who have not yet come into puberty (or, who have just come into puberty), and now some of their favorite TV characters are acting out their homosexual desires, making for a whole new kind of role model.

I’m aware, of course, that gay-identified kids still get bullied in many schools across the nation, but I’m also aware that in many other schools, coming out as gay is seen as cool or even the thing to do.

This was confirmed to me by a very liberal minded middle school teacher who told me about a 12-year-old boy who came out as gay in her class, only to come to her the next day and say, “I think I made a mistake. Can I take it back?”

Let that sink in for a moment.

Yet these are the very kids who will be influenced by TV shows like “The Fosters.”

Add to all this the influence of “Gay Straight Alliances” in middle schools and high schools, where kids are encouraged to “come out” to peers and faculty without their parents even knowing about it, coupled with the influence of Hollywood, the Internet, and aggressive pro-gay school curricula, and it’s all too easy for kids in these formative years to become even more confused about their sexuality.

And once they begin to experiment, especially at such tender ages, there’s no telling what practices and behavior and desires might become a long term part of their lives.

I’m not denying that most of those who identify as LGBT as adults say that their feelings never changed over the years. I’m simply pointing out that many people who thought they were “gay” eventually discover they are not.

One study I read found that roughly 25 percent of young teens interviewed thought that they might be gay, but 10 years later, the number of those who identified as gay was one-tenth that amount.

But how many of them engage in all kinds of sexual practices and relationships today because of their earlier sexual experimentation?

Third, not to sound prudish, but I’d be perfectly happy if there weren’t any TV kissing scenes with 13-year-olds, even if the kids were as heterosexual as they come.

“Leave It to Beaver” and “Lassie” may seems a little cheesy today, especially to young viewers, and they certainly had their flaws, but I’ll take the moral values instilled on those kind of shows over “Glee” or the latest reality show on MTV – unless, of course, you think “Leave It to Beaver” would have been better had 13-year-old Wally, Beaver’s older brother, cuddled up to another boy and kissed him.

The very thought of it is repulsive.