President Carter Aligns Himself With Terrorists 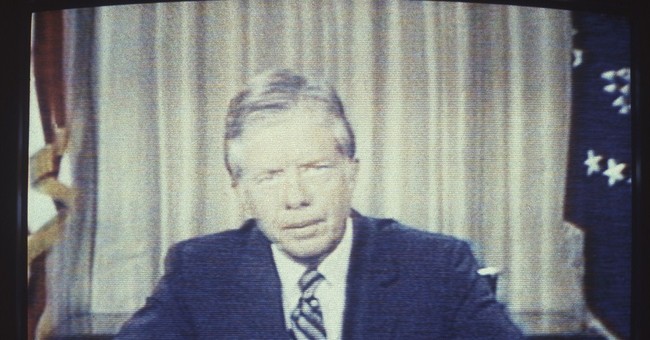 Former President Jimmy Carter, who once accused Israel of being an “apartheid state” worse than South Africa, has gone even further, rebuking the Jewish State for the way it has waged war with Hamas while actually siding with the terrorists.

Writing together with former Irish president Mary Robinson in Foreign Policy magazine, Mr. Carter stated that, “There is no humane or legal justification for the way the Israeli Defense Forces are conducting this war,” calling on Israel and the West to recognize Hamas’s “legitimacy as a political actor.”

Mr. Carter claims that Hamas, by recently joining together with the Palestinian Authority,
“pledged to adopt the three basic principles demanded by the Middle East Quartet comprised of the United Nations, the United States, the European Union, and Russia: nonviolence, recognition of Israel, and adherence to past agreements.”

But, he laments, “Tragically, Israel rejected this opportunity for peace and has succeeded in preventing the new government's deployment in Gaza.”

With all respect to two former presidents, these words are outlandish.

Where is the categorical statement of Hamas leadership that it was willing to recognize Israel and repudiate violence? Where is their renunciation of their foundational calls for the elimination of the Jewish people from all of historic Palestine?

As reported on May 21st by Arutz Sheva’s Israel National News, Senior Hamas official Salah Bardawil stated that, “Hamas’s platform is known to everyone and is not unambiguous. Any referral to handling the Palestinian issue through peaceful means implies the cleansing of Palestine from foreigners who entered in 1948, before and after this time.”

Yes, Hamas leadership reiterated their call for the ethnic cleansing of the Jews from Palestine 10 weeks ago, and it is a call with deep ideological roots.

Hamas commemorated Israel’s 66th birthday in May with a mock version of Israel’s national anthem, HaTikvah (which means “The Hope”), in which, “The Arabic words of the song twisted that message, warning that it is ‘the end of the hope’ for Israel, that Israel was doomed, and that Jerusalem will be renamed and known by its Arabic name, ‘Al-Quds.’ It also threatens to deport Israelis - or, worse, kill them.”

Arutz Sheva calls the video “genocidal” (it can be watched here) and notes that “Several days later, a Hamas children’s show encouraged children to ‘shoot all the Jews.’ And earlier this week, another Hamas publication threatened Israel’s Jews - and immigrants - with genocide via political cartoon.”

It is positively chilling to watch a tiny little girl speak of her desire to grow up and become a policewoman one day so that she can kill all the Jews, yet this is what children are being indoctrinated with on the official Hamas TV station in Gaza. (For more on this, see my article, “Hamas Calls for Ethnic Cleansing of Israel.”)

How can international leaders be so blind as to ignore such evidence? (And this is barely the tip of the iceberg.)

Back in May, before the current conflict, Hamas leadership reiterated its call to cleanse “Palestine” (which includes all of Israel today) of all Jews, while on July 25th, on Hamas run Al-Aqsa TV, one of their clerics proclaimed, “We will not leave a single one of you [Jews] alive.”

And Israel and the West are to welcome Hamas’s “legitimacy as a political actor”? How wrong of Mr. Carter and Ms. Robinson to fault Israel for “tragically” rejecting “this opportunity for peace” with an organization sworn to Israel’s destruction, an organization whose charter (which has never been officially disavowed by Hamas) contains statements like:

·“Israel will exist and will continue to exist until Islam will obliterate it, just as it obliterated others before it.” (Preamble)

·“The day the enemies usurp part of Moslem land, Jihad becomes the individual duty of every Moslem. In the face of the Jews' usurpation, it is compulsory that the banner of Jihad be raised.” (Article 15)

·“Ranks will close, fighters joining other fighters, and masses everywhere in the Islamic world will come forward in response to the call of duty, loudly proclaiming: 'Hail to Jihad!'. This cry will reach the heavens and will go on being resounded until liberation is achieved, the invaders vanquished and Allah's victory comes about.” (Article 33)

And then there is Hamas’s famous slogan, in keeping with radical Islamists worldwide: “Allah is its goal, the Prophet its model, the Qur’an its Constitution, Jihad its path and death for the cause of Allah its most sublime belief.”

How can it be that Mr. Carter and Ms. Robinson do not recognize that for Hamas, the spiritual realm and the political realm are completely intertwined, with the latter subject to the former? How can they not recognize that it is intolerable for radical Muslims to accept the presence of the Jewish people in territory that was once Muslim controlled, not to mention the importance of Jerusalem to their faith?

In a speech celebrating the 47th anniversary of Fatah and aired on Palestinian Authority TV on January 9th, 2012, the Mufti Muhammad Hussein, the religious leader of the Palestinian Authority, cited a well-known Hadith (an Islamic tradition attributed to Muhammad): “The Hour [of Resurrection] will not come until you fight the Jews. The Jew will hide behind stones or trees. Then the stones or trees will call: ‘Oh Muslim, servant of Allah, there is a Jew behind me, come and kill him.’” (As reported by Palwatch.org, a July, 2011 poll sponsored by the Israel Project indicated that a staggering 73 percent of Palestinians “believe” this Hadith.)

These sentiments are enshrined in the Hamas charter, with Article 7 citing the identical anti-Semitic Hadith, prefaced by this comment: “Hamas has been looking forward to implementing Allah’s promise [to annihilate the Jews], whatever time it might take.”

When, I ask again, has this been renounced by Hamas?

Former presidents Carter and Robinson claim that both Hamas and Israel have been guilty of war crimes, noting however, that “three Israeli civilians have been killed by Palestinian rockets, while an overwhelming majority of the 1,600 Palestinians killed have been civilians, including more than 330 children.” (See further my article, “Hey, Israel’s Not Playing Fair.”)

Yet it is well-documented that Israel worked extremely hard (and suffered its own military casualties) trying to avoid civilian casualties (although every one of those civilian deaths is absolutely tragic, whatever their exact number), that Hamas actively supported the use of human shields, even in its official combat manual, that it started the recent hostilities against Israel with kidnapping, murder, and missile attacks, that it invested countless millions of dollars in building terror tunnels rather than using that money to build hospitals, schools, and better housing, and that Israel’s blockade of Gaza is in direct response to Hamas terrorism.

Ironically, at a time when other Muslim nations are distancing themselves from Hamas, to the point that a headline to a New York Times article on July 30th stated that, “Arab Leaders, Viewing Hamas as Worse Than Israel, Stay Silent,” Mr. Carter and Ms. Robinson are siding with Hamas and throwing Israel under the bus.

Like all civil-minded people, I share the wish for peace in the Middle East and for an end to the horrific suffering, in particular for the people of Gaza who have been devastated by the recent war, along with the people of Israel, who have had to learn to live with terror next door.

That’s why we need to stand with Israel and help liberate the Palestinians from Hamas, seeking to replace them with a government that would love their people more than they hate Israel.

And that’s why Mr. Carter and Ms. Robinson are dead wrong in their assessment.