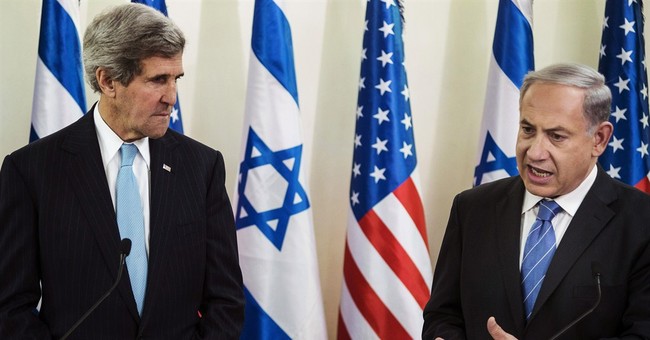 After coming under intense criticism for his remarks that Israel could become an “apartheid state” if it did not embrace a two-state solution, Secretary of State John Kerry has now sought to clarify his comments, reiterating his support for Israel, which he called a “vibrant democracy.”

While AP News reports that Kerry “pointedly did not apologize for the remarks,” he “acknowledged his comments last week to a closed international forum could have been misinterpreted.”

Two days earlier, the Daily Beast reported that Kerry had said in a private meeting with world leaders that, “A two-state solution will be clearly underscored as the only real alternative. Because a unitary state winds up either being an apartheid state with second-class citizens—or it ends up being a state that destroys the capacity of Israel to be a Jewish state.”

An apartheid state? How could the Secretary of State of America use such a loaded term, one normally used by Israel’s critics and enemies?

Interestingly, when David Ben Gurion explained what he meant by a Jewish state at a meeting of the United Nations Special Committee on Palestine at Lake Success New York on July 7, 1947, he made it clear that it would be anything but an apartheid state.

He explained that “. . . a Jewish State does not mean one has to be a Jew. It means merely a State-where the Jews are in the majority, otherwise all the citizens have the same status.

“This is what we mean.

“This is what we have to mean.

“We cannot conceive that in a State where we are not in a minority, where we have the main responsibilities as the majority of the country, there should be the slightest discrimination between a Jew and a non-Jew.”

But, Israel’s critics will say that it has already become an apartheid state and that Ben Gurion’s vision has failed, since the Palestinians living in Gaza and the West Bank are treated like second-class citizens (and worse) and some even live behind an apartheid wall.

Isn’t this the constant complaint of those in the BDS (Boycott, Divestment, Sanctions) movement, which isn’t afraid to use even more harsh terms, like “ethnic cleansing”?

What Israel’s critics miss is the fact that those Arabs (aka Palestinians) who chose to remain in Israel in 1948 demonstrate that the apartheid charges are completely false.

· They have complete religious and political freedom, far more than their colleagues under Hamas and the PA (or the surrounding Muslim nations)

· They represent 10% of the Israeli Parliament (Knesset)

· They have a seat on the Supreme Court

· Some of them are now advocating fighting in the Israeli military, although they are exempt from having to serve

· An Arab woman was even named Miss Israel in 1999

As for the Arabs/Palestinians living in Gaza and the West Bank, these remain Israel’s declared enemies, to the point that when Israel releases hundreds of Palestinian prisoners as yet another peace gesture, those prisoners who have blood on their hands – in other words, the murderers of Israeli citizens – are hailed as heroes and celebrities by the Palestinian leadership. Is this what a real peace partner does?

As for the security barrier (falsely called an apartheid wall), it absolutely does create hardships for the Palestinians living on the wrong side of the barrier. But it was erected to keep murderers out (the small parts that are actually a wall rather than a fence were especially built to thwart snipers), and so it is the Palestinian leadership that is to blame for the barrier, not the people of Israel.

This is not to whitewash Israel or to deny that there are Israelis who are hostile to the Palestinians or who have mistreated and denigrated them. Nor is it to deny that Israel had sometimes failed to treat all its Jewish citizens with equality.

But the reality is that Israel has already proven that, given the chance to live peacefully with the Palestinian population, it will be anything but an apartheid state. Its 1.6 million Arab citizens prove this point every day.

Put another way, the people of Israel have demonstrated that if you don’t try to blow them up and kill them, they will treat you fairly. In stark contrast, the Palestinian leadership has made clear that, in the event of a two-state solution no Jews would be welcome to live in their state.

So, the Palestinian Authority can advocate for a Judenrein state of its own, and there’s hardly a word of criticism. But when Israel protects itself from terrorists, it is branded an apartheid state by its critics, with even Secretary of State Kerry using the ill-advised term.