Michael Barone
|
Posted: Jan 10, 2020 12:01 AM
Share   Tweet
The opinions expressed by columnists are their own and do not necessarily represent the views of Townhall.com. 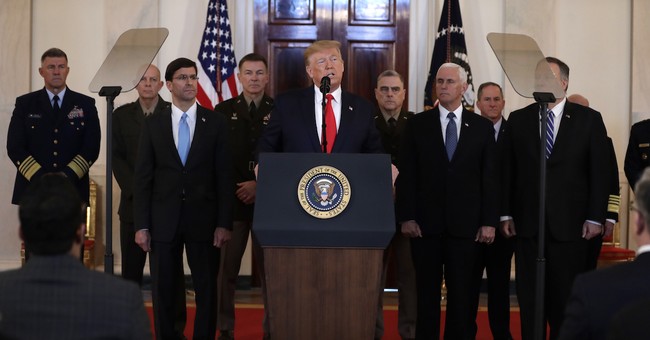 In all the reportage and commentary on the killing of Gen. Qassem Soleimani, I haven't seen much mention of an interesting parallel between the Iranian mullah regime's attacks on America this past week and its attacks when it first came to power 40 years ago.

The similarity is that both times, the Iranian regime violated diplomatic immunity. In 1979, it seized 52 American diplomats and held them hostage for 444 days, releasing them only on the day former President Ronald Reagan took office. Last week they attacked the U.S. embassy in Baghdad after launching multiple attacks on U.S. troops in Iraq.

Iran's attacks on diplomats reveal it as an outlaw regime.

That's why it promulgated the fiction that "students" seized and controlled the hostages beyond the government's control. In the past week, leading American media have echoed the mullah regime's latest fictions, calling those who attacked the U.S. Embassy "mourners" (The New York Times) or "protesters" (The Washington Post). That's in line with The Post's headlines describing Islamic State leader Abu Bakr al-Baghdadi as "an austere religious scholar" and calling Soleimani "Iran's most revered military leader."

American media giants' ready endorsement of a tyrannical regime's propaganda labels shouldn't fool anyone. "The whole 'protest' against the United States Embassy compound in Baghdad last week was almost certainly a Soleimani-staged operation," The Times' Thomas Friedman wrote last week. It was not a spontaneous attack by "mourners" or "protesters," just as the hostage taking in 1979 was the work not of "students" but of the regime.

Much media commentary following Soleimani's death dwelled on the possibility -- clearly relished by some commentators -- that Iran would retaliate violently against the United States. Few bothered to note that the embassy attack followed weeks of violent attacks -- oil tankers seized, a drone downed, bombs lobbed at a Saudi oil refinery and rockets at U.S. troops.

Iran's retaliation so far seems perfunctory. It's possible Iran will attack the "great Satan" more aggressively later -- or that it will halt its attacks, as it did after Reagan ordered sorties that sank some of its ships in 1988.

In the meantime, former President Barack Obama and his administration hoped for the permanence of its Joint Comprehensive Plan of Action nuclear agreement with Iran -- which never had majority support in Congress. Those hopes were shattered by Trump's withdrawal in May 2018. And there's little or no evidence that Iran ever became the cooperative partner in the Middle East that Obama expected.

Distaste for this president is obviously warping many critics' judgment. Without losing a beat, Democrats like Sen. Chris Murphy moved from criticizing Trump's inaction to criticizing Trump's action. News stories depicting Trump's decision as impulsive and not based on serious military planning were, without acknowledgement, contradicted by news stories the next day.

Actually, it's possible for a knowledgeable observer not afflicted with Trump Derangement Syndrome to discern a coherent foreign policy strategy, "a bold agenda internationally and a deeply controversial one at home," as Walter Russell Mead wrote this week in the Wall Street Journal. "Confrontation with Iran, competition with China, outreach to Russia."

Does "confrontation" mean, as the New Yorker's military correspondent Dexter Filkins argues, regime change in Iran? Critics treat that as unthinkable, yet it would be welcomed by millions of Iranians. Those who care about human rights should not mourn the end of a thug-ocracy that throws gay men off high-rises and beats up women whose headscarves slip down.

It's possible to encourage peaceful regime change. Reagan administration policies in the 1980s helped to undermine the communist regimes in Eastern Europe and unravel the Soviet Union -- things almost no experts thought could happen.

Iran's mullah regime has lasted for 40 years, about as long as the communist satellite regimes in Eastern Europe. Is it totally unrealistic to hope that it might peacefully disappear as well?

It is clear that Obama's attempted rapprochement with the Iranian regime has failed, and it seems possible that the elimination of its most aggressive promoter of terrorism and the Trump crackdown on its economy are attempts to provoke peaceful regime change.

Meanwhile, Donald Trump was justified under international law to respond with military force to a violation of diplomatic immunity -- an act of war -- just as then-President Jimmy Carter was 40 years ago when he authorized the hostage rescue raid in Iran.

Carter's attempt unhappily failed, and the regime stayed in place. Trump's action succeeded -- and we'll see what happens next.