Michael Barone
|
Posted: Jun 22, 2018 12:01 AM
Share   Tweet
The opinions expressed by columnists are their own and do not necessarily represent the views of Townhall.com. 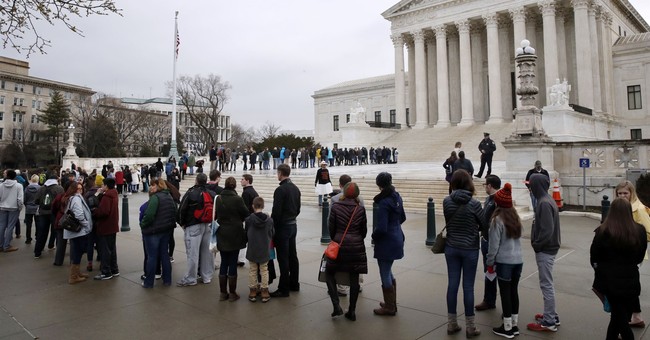 "I would prefer not to." That was the invariable reply of the title character of Herman Melville's 1853 story "Bartleby, the Scrivener," when asked by his employer to perform a task.

It's also a phrase you might use to describe the opinion of the Supreme Court in its latest redistricting -- or gerrymandering -- case, Gill v. Whitford. This was expected to be a closely divided case and one that many observers hoped would establish a clear legal standard to overturn partisan gerrymanders.

But all nine justices concurred in the central point of Chief Justice Roberts' opinion, that the plaintiffs lacked standing -- harm that affects them "in a personal and individual way" -- needed to bring the case. Evidently, they "would prefer not to" resolve the issue of when partisan district drawing violates voters' constitutional rights.

It's an issue the court first grappled with in 1973, less than a decade after its 1964 decisions requiring equal-population congressional and legislative districts. Back then, the court conceded that redistricting "inevitably has and is intended to have substantive political consequences." And when examining an obviously partisan Republican districting plan in Pennsylvania in 2004, eight justices were deadlocked 4-4, while Justice Anthony Kennedy found no constitutional violation but no remedy.

"There are yet no agreed upon substantive principles of fairness in districting," he wrote. His concurrence in Gill v. Whitford suggests he hasn't found one in the intervening 14 years.

The plaintiffs, Wisconsin Democrats, who thought they'd found one, must be disappointed. Their theory is that a districting plan should give each party the proportion of legislative seats identical to its proportion of the total votes for legislature statewide. They objected that Republican districters prevent this by "packing" (putting too many Democrats in some districts) and "cracking" (putting just enough Republicans in some districts to win). They complained that leaves many Democrats' votes "wasted."

There are some obvious problems here. Some candidates, even in this straight-ticket era, run well ahead of their parties. And over the 10-year period between censuses, some voters switch parties, such as in 2006 and 2008 and perhaps this year. Plus, how does a court judge that too many votes are wasted and decide how much reverse cracking and packing is necessary to compensate?

More fundamentally, requiring courts to attempt to equalize each party's number of "wasted" votes amounts to saying that the Constitution requires proportionate representation of the sort specifically imposed in many countries. But the Constitution explicitly leaves Congress free to decide that, and since 1842, Congress has chosen instead to require single-member districts with equal population.

Justice Elena Kagan, in a concurring opinion endorsed by the three other Democratic-appointed justices, takes the view that the Wisconsin plaintiffs could prevail in the lower court to which the chief justice remanded the case if they present their case more strategically. She argues that the chief justice ignores precedents that suggest harm to a political party and not just individual plaintiffs violates a First Amendment right of freedom of association, recognized by Justice Kennedy in 2004.

But like many Democratic politicians and commentators, Justice Kagan overstates the evils of partisan district drawing. "More effectively every day, that practice enables politicians to entrench themselves in power against the people's will," she writes.

This ignores the redistricting legerdemain of Democratic Rep. Phillip Burton, whose hand-drawn redistricting plans gained more than a dozen House seats in California and other states in the 1970 and 1980 election cycles. Liberals didn't think gerrymandering imperiled democracy back then.

The Democrats' current problem is not just that Republicans controlled districting in more states than Democrats after the 2000 and 2010 Census; it's also, as the court and the Wisconsin plaintiffs recognized, that Democratic voters are demographically clustered in central cities, sympathetic suburbs and university towns, while Republican voters are more evenly spread around.

A party whose voters are demographically clustered is at a disadvantage in any legislature with equal-population single-member districts. One solution for Democrats is to try to appeal beyond their current redoubts, as President Bill Clinton did in the 1990s. That might even neutralize Republicans' redistricting advantage after the 2020 census.

Gill v. Whitford suggests the courts won't bail the Democrats out if they don't. Justice Kagan and her colleagues may be eager to help, but they don't have a fifth vote in sight. And Chief Justice Roberts and four of his colleagues seem to be saying, "I would prefer not to" -- and that the equal-population requirement effectively limits political gains from partisan redistricting.