Can Trump Disrupt the General Election as He Did the Primaries?

Michael Barone
|
Posted: May 06, 2016 12:01 AM
Share   Tweet
The opinions expressed by columnists are their own and do not necessarily represent the views of Townhall.com. 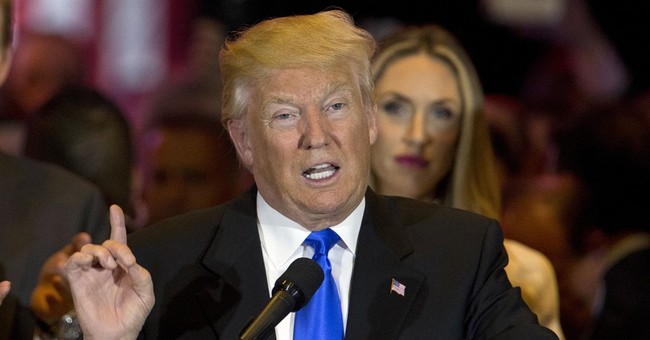 So Republicans now have a presumptive nominee -- one headed to a clear delegate majority without visible opposition -- sooner than the Democrats. It's another way in which this year's presidential race has defied expectations and ignored precedent.

Donald Trump will now have 10 months to stage-manage his Cleveland convention, while Hillary Clinton must spend the next four weeks going through the motions of campaigning against Bernie Sanders in 10 primaries and the North Dakota caucus.

Clinton will then be the presumptive Democratic nominee. But if Democrats used Republicans' delegate allocation rules, she would have been that two months ago.

Trump, despite his complaints about the "rigged" nomination process, actually used that process to great advantage. His celebrity and $2 billion worth of media coverage enabled him to win early contests in a 17-candidate field with minorities of the vote.

The same 36 percent of the vote that gave Trump a win in Michigan left him far behind a single competitor in nearby Ohio. Overall, in February and March Trump won just 38 percent of popular votes, but the winner-take-all rule and similar rules he later decried gave him 47 percent of delegates.

There is an eerie similarity between the patterns of support of the two parties' nominees. Both Trump and Clinton got their bedrock support from their parties' most downtrodden (and, in general elections, most faithful) constituencies.

It also appears that Trump and Clinton ran worst among groups with high degrees of what scholars Robert Putnam and Charles Murray call social connectedness or social capital. Trump was especially weak among socially connected Mormons and German-Americans and strong in areas with high opioid addiction. Both were weaker in caucuses, which favor the socially connected, than primaries.

After Ted Cruz beat Trump in Wisconsin April 5 it appeared that Trump could fall short of the 1,237-delegate majority. At which point he charged repeatedly that the process was unfair. The candidate with "most" votes, whether or not it's a majority, should be nominated, he said; exit polls showed most Republicans agreed. As for the Cruz campaign's moves to choose sympathetic delegates, and Cruz and Kasich's partnership to divvy up states -- unfair!

Attitudes evidently changed. Voters preferred the clarity of a Trump nomination to the uncertainty of a contested convention. Up through mid-April Trump never got 50 percent. He hasn't gotten less since. On April 19 and April 26 he, for the first time, outperformed his poll numbers in primaries in six Northeast states. But that could be discounted; like Clinton, he's run best in the Northeast and the South.

Indiana this week was another story. Trump got 53 percent there, 12 to 18 points better than in other Midwestern primaries; in contrast, Indiana Democrats gave Bernie Sanders his sixth Midwestern victory. Republican opinion has clearly swung toward Trump. Ted Cruz, who hoped for an Indiana victory, and John Kasich, who carried just seven counties outside his home state of Ohio, both left the race.

Trump's success in improving his standing among Republicans in the past six weeks raises the question of whether he can do so among general election voters in the next six months.

There's certainly plenty of room for improvement. Current polling averages show him trailing Clinton 47 to 41 percent, and the latest poll has him behind 54 to 41. About two-thirds of voters have unfavorable feelings toward him, including larger proportions of women and millennials.

Standard analysis says these are losing numbers and that a candidate universally known will have a hard time turning them around. That's plausible. But Hillary Clinton also has high (circa 55 percent) unfavorable numbers and even lower numbers on honesty. Results in a few recent target state polls look like the close partisan division that's prevailed for two decades, not a Democratic blowout.

Much could depend on turnout. Contrary to conventional wisdom, Democratic turnout has been declining during the Obama presidency and, in contrast to 2008, turnout this year has been higher in Republican than Democratic primaries. In nearly all contests, Clinton has received fewer votes than she (or Obama) got in 2008. Sanders has swept young voters, suggesting many may not turn out this fall.

Clinton's still the favorite. But Trump has shown his capacity to disrupt political alignments, and he'll be trying to do so again.