Michael Barone
|
Posted: Apr 12, 2016 12:01 AM
Share   Tweet
The opinions expressed by columnists are their own and do not necessarily represent the views of Townhall.com. 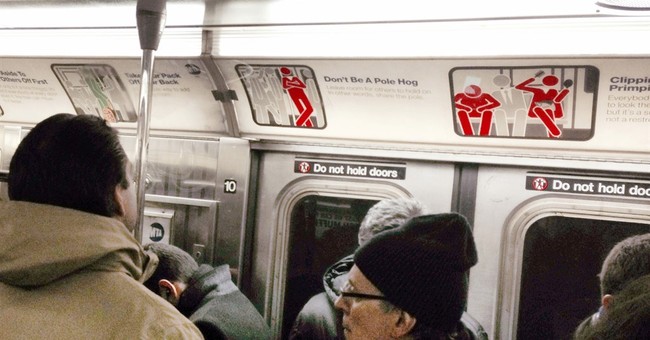 Trending
If you live any distance beyond the Capital Beltway you probably didn't notice, but an important part of government in Washington shut down on Wednesday, March 16. That's when the Metro subway system's recently installed general manager, Paul Wiedefeld, ordered a one-day shutdown of the entire 117-mile system for emergency inspection of track-based power cables.

The result was not quite as dire as many feared. Some Metro commuters took a day off; others climbed into buses or cars early to weather expected traffic jams. The federal government and the city's lawyers and lobbyists continued to function.

Worse is likely in store. On March 29 at the Mayflower Hotel, half a block from a Metro station opened in 1976, at a forum entitled "Metrorail at 40: Restoring a World Class System," Wiedefeld announced that there could be extended shutdowns of any of the system's six subway lines.

"It may come to the point," said Jack Evans, Metro board chairman and D.C. council member, "that we have to close the entire Blue Line for six months. People will go crazy. But there are going to be hard decisions that have to be made in order to get this fixed."

In other words, the gleaming Metro system is increasingly (to paraphrase the title of Ralph Nader's 1965 book on auto safety) unsafe at any speed.

That's been apparent for some time. In June 2009 a crash at the Fort Totten station killed nine passengers and hospitalized 52. In January 2015 a woman died when smoke was blown by an improperly directed fan in a train stopped at L'Enfant Plaza. A derailment at Smithsonian closed six stations at rush hour; a fire at Stadium-Armory caused weeks of delays. In October 2015 the Federal Transit Administration took over safety regulation of Metro.

How did this happen? Luke Mullins and Michael Gaynor, in a December 2015 Washingtonian, describe the "insular culture" of Metro's Rail-Operations Control Center. It has been chronically understaffed, with old-timers relying on outdated rule books and personal lore, freezing out newcomers so they can accumulate overtime pay that might entitle them to generous pensions. Controllers feuded routinely with "train-breaking" drivers.

People noticed. Despite the capital area's booming economy and gentrifying neighborhoods around many Metro stations, ridership declined 5 percent between 2010 and 2015.

Metro wasn't supposed to be like this. Historian Zachary Schrag's thoroughly researched and gracefully written "The Great Society Subway" tells how Metro was conceived in the 1960s and built in the 1970s as an alternative to city-shredding freeways -- a triumph of forward-looking planning, regional cooperation and aesthetically pleasing design.

If government is what we decide to do together, Metro seemed to be government at its best.

But after 40 years it has come to be government at its dreariest, with problems overlooked, maintenance deferred and safety scanted by employees secure against discipline or dismissal and more concerned about overtime pay and pensions than serving the public. We have seen the same phenomenon across the country in the Veterans Affairs scandals.

Metro has suffered also from the nature of political incentives. Board members, who represent local governments, get credit for a new station or bus line but not for routine safety measures and necessary upkeep. Metro decided to keep stations open till 3 a.m. on weekends to accommodate partying young gentrifiers (who could easily use Uber or increasingly competitive taxis to get home) -- which squeezed out time for necessary maintenance.

There is a certain romantic appeal to rail transit. Central planners love the idea of channeling the masses into fixed pathways and forcing everyone to live and work in high-rise clusters around stations. It's a good lifestyle for many, but not for young families -- and not when the trains stop running for six months.

Aaron Renn of Urbanophile.com points out that cities that "build a rail system ... not only have to pay to build it, they pretty much have to pay to rebuild it every 40 years." Meanwhile, Washington has squandered hundreds millions on a 2-mile trolley line, which, unlike Metro, will never get much usage.

"It is becoming increasingly apparent that progress tends to arise from the evolution of decentralized trial-and-error processes more than from grand schemes launched by planners and revolutionaries," writes economist Arnold Kling in the spring issue of National Affairs.

The plight of Metro, a system designed and built by unusually gifted planners, is a tragic example.