An Unhappy History Seems to Be Repeating Itself 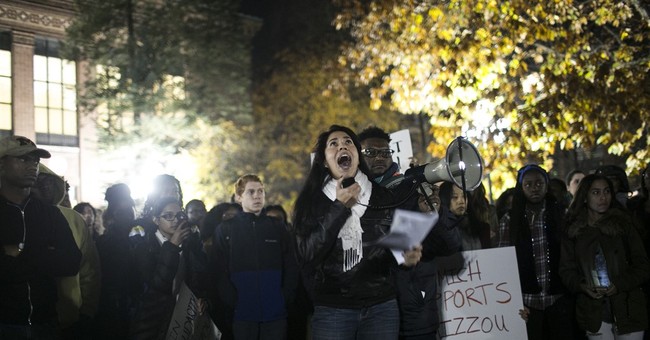 Riots in black neighborhoods. Rebellions on campus. The news these past few months and particularly in the past week has been full of stories that remind us, as William Faulkner wrote a little more than half a century after the Civil War, "the past is never dead. It's not even past." We're seeing something that looks eerily like the recurrence of events that led, half a century ago, to the destruction of much of our cities and much of our campuses.

The Berkeley students' cause was "free speech," protesting the ban on tables in campus with electioneering material for candidates such as Lyndon Johnson. Students held up signs proclaiming "Do not fold, bend, mutilate, or spindle" -- a disclaimer on the IBM punch cards then used to input data onto huge multi-frame computers. In retrospect, this was a sign of the baby-boom generation's rejection of the cultural uniformity of the post-World War II years.

But the rebellions that followed on multiple campuses for many years were transmogrified into many other things -- banning military presence on campus, authorizing separate black organizations, firing administrators and establishing racial quotas and preferences in admissions.

In the process campuses were transformed into leftist enclaves in the larger society, with "tenured radicals" reshaping faculty in their own image, black and Hispanic groups self-isolating into mono-racial cliques and speech codes enacted to punish anyone who dissented from campus orthodoxy. Scholarship in many areas has been profoundly weakened and trivialized -- a huge loss to society.

That's the atmosphere highlighted in the violent and frenzied protests lately at the University of Missouri, Yale and Claremont McKenna College. Protesters are demanding high-visibility denunciations of real or imagined racial slights and the creation of "safe spaces" for students desperate not to hear opinions other than their own. If this is as representative of generational attitudes as the baby boomers' punch-card signs, we're in for an even more polarized, less tolerant and seriously infantilized future.

Eleven months after the first Berkeley protests, a riot broke out in Watts, a black neighborhood in Los Angeles, after an argument following the arrest of a black motorist who had been drinking and driving. It lasted for six days and was followed by dozens more over the next three years, with especially high death tolls in Newark, Detroit and Washington.

After 1968, riots ceased but violent crime exploded in black communities, destroying what had been stable neighborhoods, retail areas and factories. Crime was vastly reduced in the 1990s, but you can still see the damage in such places as Detroit and Newark today.

Elite de-legitimatization of law enforcement followed the 1960s riots and something similar may be happening again. After the August 2014 shooting of a violent suspect in Ferguson, Missouri, protests and violence erupted across the nation, and police in many cities ceased proactive patrolling -- and murder rates exploded in Baltimore, St. Louis, Milwaukee and many other cities.

The Berkeley protests came just after passage of the 1964 Civil Rights Act and on the brink of passage of Johnson's Great Society legislation. The Watts riot came just after passage of the hugely effective Voting Rights Act of 1965. Today's campus and city rioting comes just as the most liberal administration since has at least partially succeeded in "the fundamental transformation" of the nation. Liberal government seems not to squelch protest but to embolden it.

One is reminded of Alexis de Tocqueville's observation that the French Revolution arose not out of desperation but at a time of rising expectations. The defenestration of liberal university administrators is reminiscent of the Jacobins guillotining the Girondists and then being guillotined themselves. The revolution eats its own -- and destroys its own redoubts.

Berkeley and Watts were followed in California by the election of Gov. Ronald Reagan, riding a wave of support from a GI generation that financed its great universities and supported civil rights legislation. Nationally, Republican presidents won five of the next six elections. Will today's sequels produce a similar response?